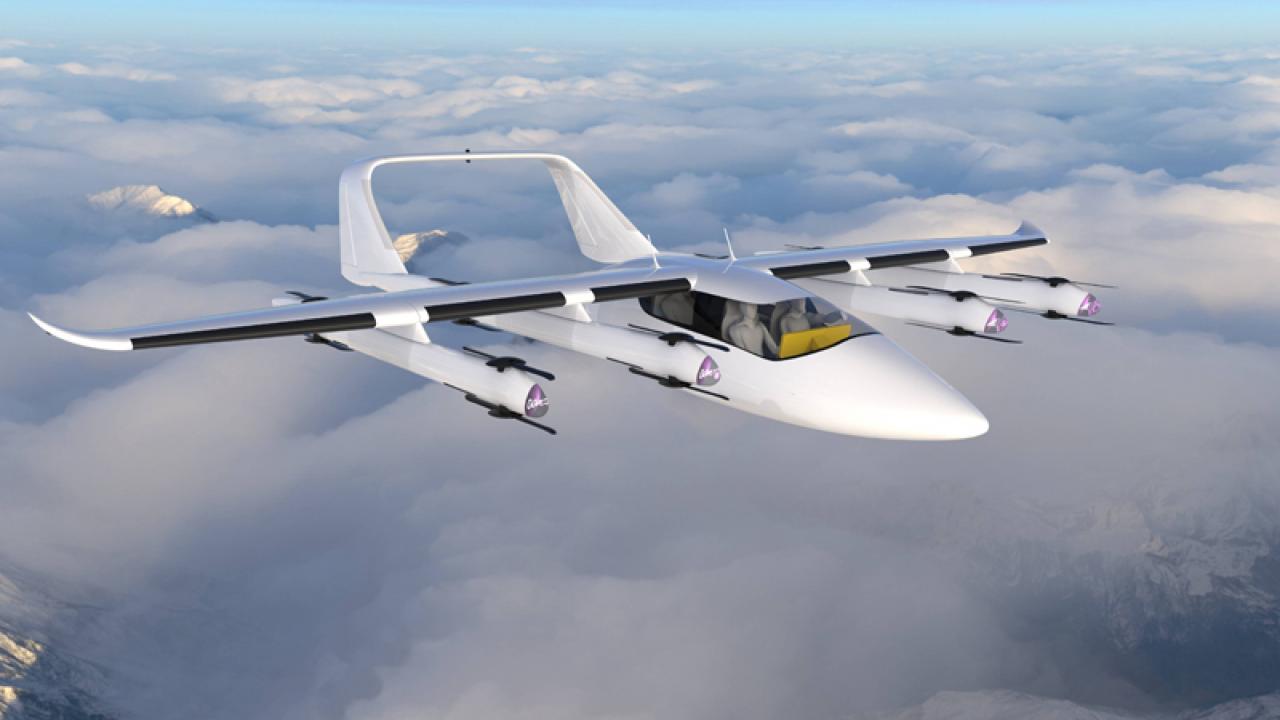 The Zuri VTOL is developed by a company in the Czech Republic, and relies on several horizontally and vertically-oriented propulsion sources that enable forward accelerated flight and vertical takeoff and landing capabilities.

Propeller Configuration: Zuri is powered by 16 independent lift fans for vertical takeoff and landing, and one rear-facing pusher propellor for forward flight.

VTOL PROPULSION: The VTOL propulsion system consists of specially designed propellers, driven by highly efficient electric powerplant units. During horizontal flight, the propellers are in the position of lowest drag. The redundancy of our VTOL system is key to a higher level of safety when compared to the propulsion of a conventional aircraft.

PROPULSION SYSTEM OF HORIZONTAL FLIGHT: The propulsion system is based on a next-generation hybrid powerplant unit. Key features of this system include top-class reliability, redundancy, and high efficiency. Due to low fuel consumption, the propulsion system provides extended range for our missions.

BATTERY PACK: The battery packs consist of modern lightweight lithium cells. There are several independent battery boxes, which are individually monitored and protected by an intelligent battery management system. The boxes are equipped with fireproof insulation for maximum safety.

FLIGHT CONTROL & AUTOPILOT: The flight control system consists of a redundant fly-by-wire system with a mechanical backup for airplane control surfaces. The sophisticated autopilot provides flight control based on multiple inputs, traffic, or terrain information to ensure a maximum level of safety.

Our Take on Zuri

Zuri is a relatively young company (initial conceptualization in 2017) based in Prague, but has a solid and realistic aircraft design. The company has recruited a well-experienced team of engineers (and from their website, is seeking additional talent in test and certification categories) to assist in the final steps of production and initial flight testing. Zuri has thus far a steady track record of progressing from its concept in 2017 through their first small-scale model in May of 2018 and a proof of concept model to follow in August of the same year. 2018 was a windfall for the company when Pale Fire invested over €600k in the company in December. In 2019, the company grew its team, announced Kiwi.com (an online budget travel platform) as a strategic partner, and announced testing in their one-seater prototype along with scale-model wind tunnel testing. Their momentum charts a trajectory that should result in test flights of a single-seat prototype soon, with goals to become one of Europe's main eVTOL manufacturers for business transport and island hopping.