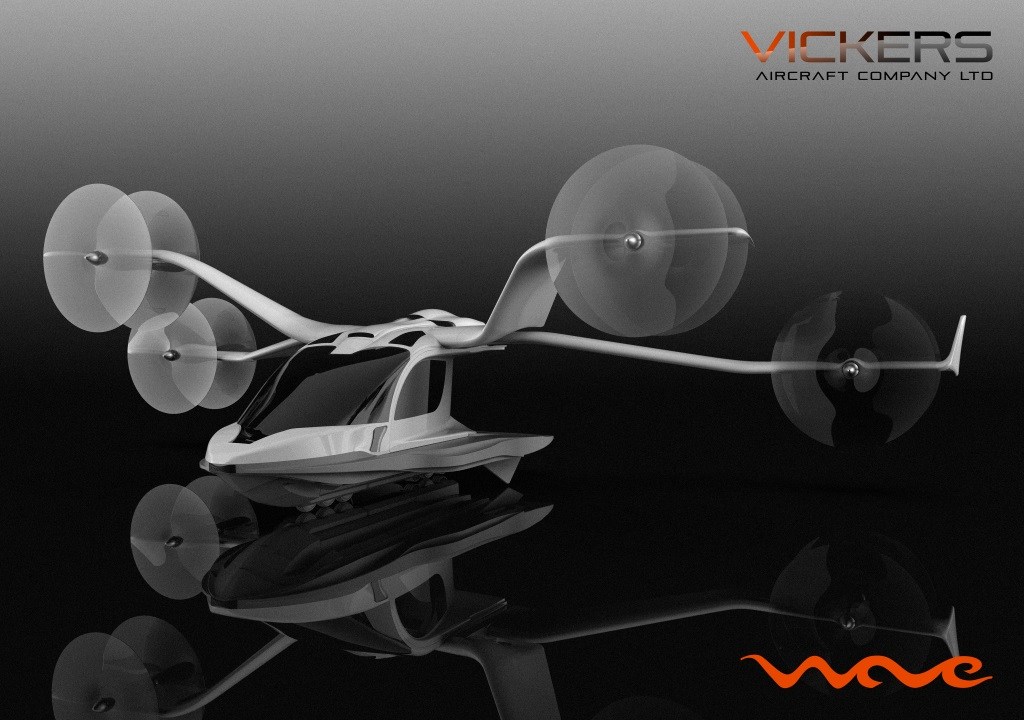 The Vickers Wave eVTOL is the eVTOL version of the Vicker Wave LSA (lightweight sport aircraft). The Wave LSA is an amphibious sport aircraft built to be sleek, safe, and dependable. Similar to to the Wave LSA, The Wave eVTOL design concept is built with ready-to-manufacture components and technology.

Vicker's Aircraft was founded in 2011, and introduced the Vickers WAVE in 2014. The company is based in Hamilton, New Zealand.

Paul Vickers spent several years as a designer and supplier to the aviation industry, as well as a designer of market-leading boats. He eventually decided to begin designing and building his own aircraft, and so founded Vicker's Aircraft. Having already acquired high-level skills in boat building and aviation, Paul decided to devote himself to building amphibious airplanes that he 'would love to fly'.

*Note: Vickers Aircraft has not yet built a prototype because it is focusing purely on getting production-ready. It believes having a prototype is "only 15% of the battle".

Our Take on the Wave eVTOL

The Wave eVTOL is a bold concept, combining the challenges of seaplane flight with those of electric vertical takeoff and landing. The team seems to understand the difficulties behind bringing a product to market, though, and their choice of avoiding prototype production early on in the design phase is a unique approach for their business case. However, their reasoning for doing so is substantial: they see many prototypes that make undeliverable promises. Instead, they hope to focus on manufacturing potential immediately. Because they've based their entire design off already-feasible components, they most likely may be one of the first companies to bring its eVTOL to the production stage. The Wave eVTOL is also unique in its amphibious capabilities–this could position it well in markets that require water landings such as remote islands and difficult to access areas. Vickers' partnership with ROTAX announced on 2019, paired with the doubled down focus on design amidst the global pandemic of 2020 has allowed the company to firm their design approach prior to integration of the powertrain for their newest WAVE prototype, which "should be available soon".

Joby’s New Board of Directors and SPAC Offering Details

XPeng Releases Footage of its Electric Flying Car in Action

Powerplant: Hybrid powertrain gives the WAVE eVTOL the ability to use high powered electric motors for direct drive to the rotors.

Fixed wing flight: On two separate wings, each with two rotors. The back wing starts at a lower position, then rises as the rotors rotate into fixed wing flight position.

Regulation: The Vickers eVTOL will be piloted rather than autonomous so that it can match regulations more quickly. It is still waiting for changes in the FAA to allow for electric propulsion. Vickers is working closely with the Civil Aviation Authority of New Zealand (CAANZ), which is excited by the prospect of eVTOL Vehicles and is near to becoming the first country in the world to allow manned eVTOL flights.

While the following options list covers the amphibious aircraft, many of the same features are reportedly to be included in the eVTOL version as well.