We hear a lot lately about urban air mobility and air taxis that are going to transform our commutes. Recently, I’m getting asked if we’ve yet reached peak-hype. I’m not sure people even agree what the hype is about, much less whether we’re at a crescendo. A common vein in hype is being led into an overly short-term mindset and then getting disappointed. With today’s news cycle, and lacking a broader framework, this is an easy trap to fall into. To counter this, in what context can we frame aerial mobility? Let’s see if history can be a guide. 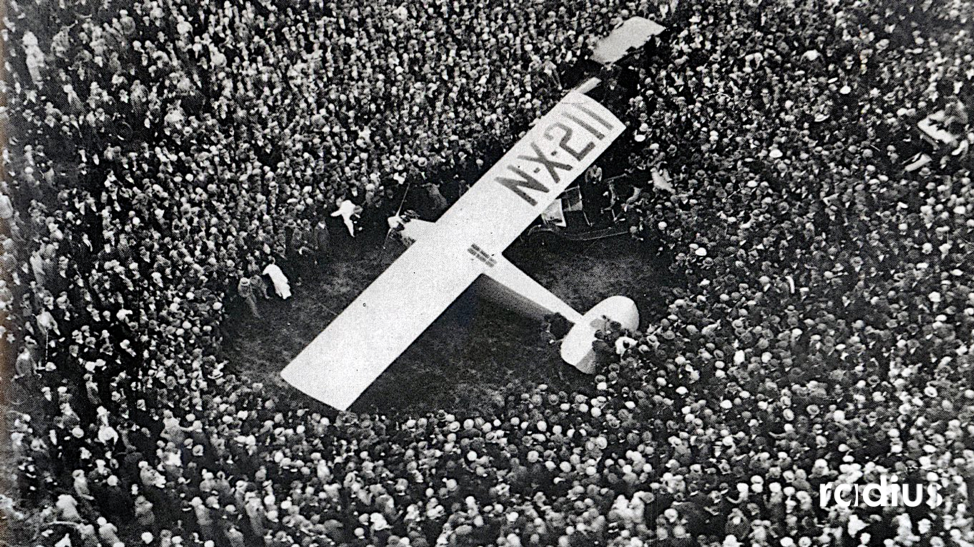 From the day Charles Lindbergh landed the Spirit of St. Louis at Le Bourget in 1927, people have dreamed of when airplanes would deliver truly spontaneous freedom of flight, to move around the world as they wished.

At the time, Charles Lindbergh’s crossing of the Atlantic was a pivotal moment that inspired the world, bringing a wave of capital, entrepreneurs and engineers into the industry. Like today, there was a frenzy of innovation and businesses getting started. Their shared vision was that soon everyone would be flying aircraft at their own whim, like driving a car.

Aviation has come a long way since then, connecting the world, yet that dream has remained elusive. For nearly a century, flying for most of us has been constrained to mass-aggregation of people on long-distance, scheduled commercial air routes with only enthusiasts or the wealthy braving the expense and complexities of private aviation.

Why this outcome? Progress during World War Two raised expectations for a domestic revolution in the use of personal airplanes. Wartime advances in aircraft design and manufacturing combined with the large number of trained pilots and people otherwise exposed to flight fueled expectation that following the war there would be demand for hundreds of thousands of airplanes as soldiers returned. Indeed, industry responded, with ads during the war reflecting this expectation as manufacturers prepared themselves and the public for the coming new era in flight. 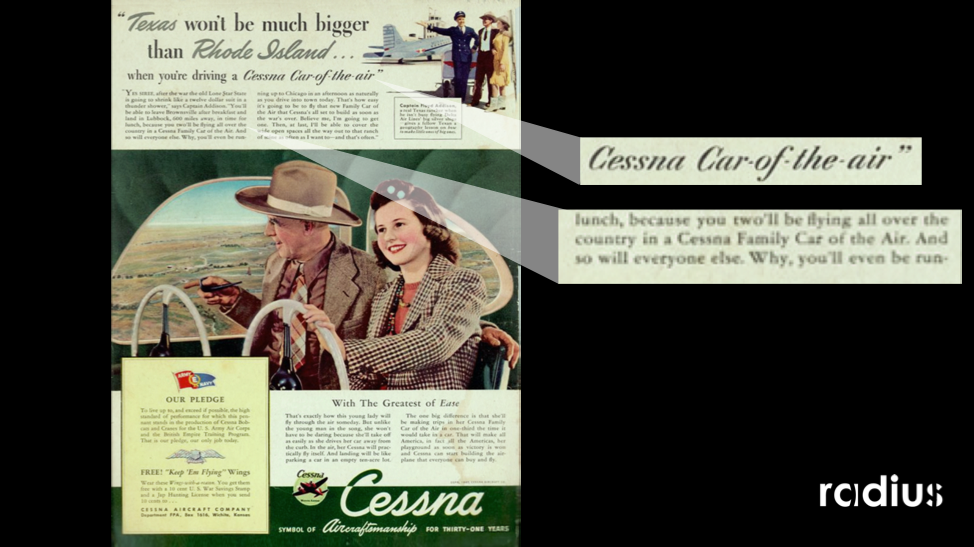 Things actually got off to a decent start. The general aviation industry sold a record high 33,254 aircraft in 1946. But it didn’t last long. A contraction in aircraft sales came about suddenly and violently. In 1947, the number of aircraft sold dropped by more than half, and halved again in 1948. Not until 1951 did growth return. After a modest recovery in the 1960’s and 70’s, general aviation aircraft shipments stalled, seemingly permanently. 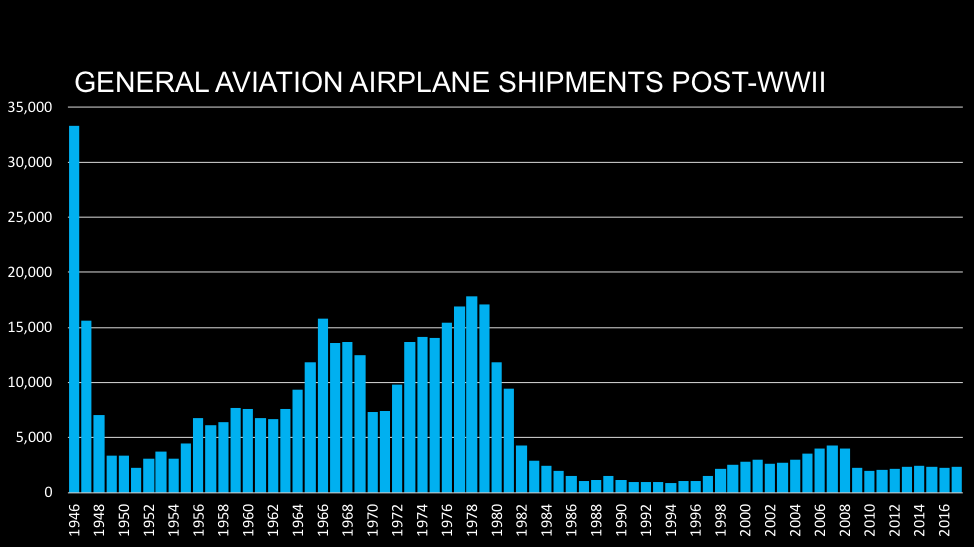 Why did general aviation fail to scale? Simply put, the product didn’t meet the needs of the market. Operating small combustion-powered aircraft proved to be too expensive and frequent maintenance made it unreliable to depend on. At the same time, piloting an aircraft remained complex and steep training requirements held back the pilot population. These forces fed on each other, limiting sales and thus funding for product improvements and airport infrastructure. A stringent certification process also contributed — what was proven safe was often kept in favor of innovation. 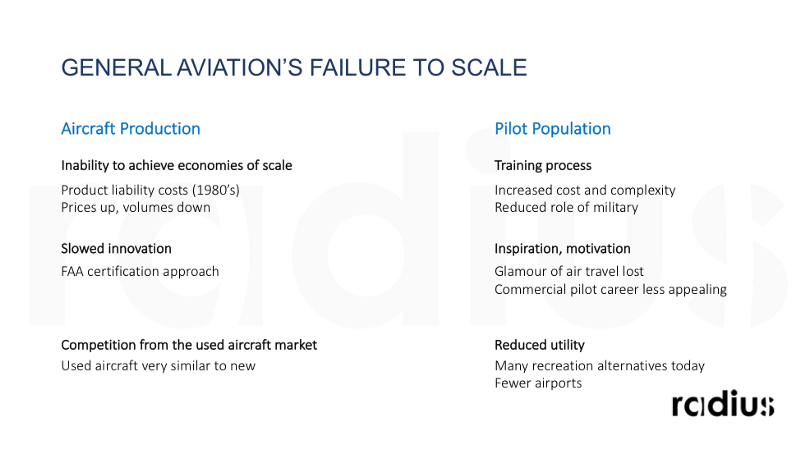 Combined, these factors kept aviation as personal transport beyond the reach of mass adoption. This cycle persisted for decades. The technology was just not evolved and mature enough and the industry had no path to overcome it.

In contrast, commercial aviation thrived. Here, efficiencies could be gained through aircraft scale and complexity managed with highly trained professional pilots. Today, as we watch tens of thousands pass through mega-hub airports daily, we wonder — was personal aviation a misguided idea or just before its time?

The answer, in this case, is destined to come from outside. As we apply electric propulsion and automation technology to flight, we see how they upend core assumptions around the aircraft, its economics, safety, and usability; and moreover, the transportation system in which it will operate. 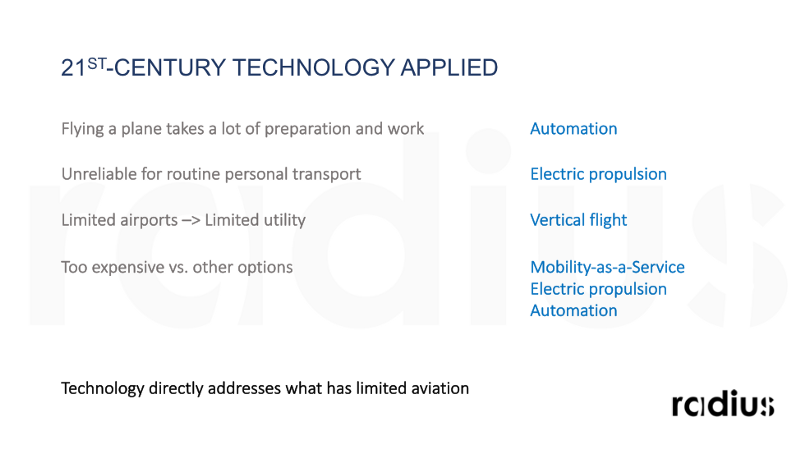 This is not simply an improvement; technology is literally redefining flight. Propulsion electrification, autonomy, and the connected aircraft have profound implications. Electrification turns the operating cost and maintenance equation on its head, while opening up fundamentally new aircraft design possibilities. Automation sidesteps the hurdle of pilot training, delivering the on-demand mobility experience as a passenger rather than an operator. Autonomy in aviation is arguably a more tractable problem than on the ground, as the decades of automation experience already in the aerospace industry indicate.

Thematically, these drive the emergence of three flight platforms: the drone, (hybrid) electric airplanes, and the electric vertical takeoff and landing aircraft (eVTOL). 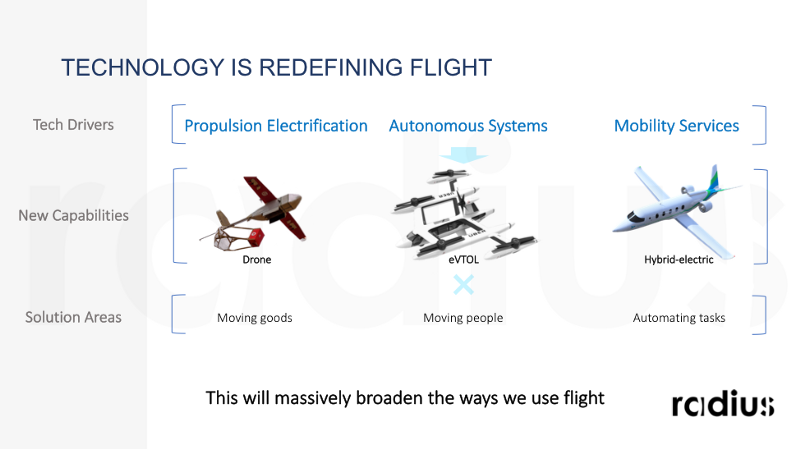 Fantastic, sounds simple. Take that drone and scale it up, right? Be done in about three years, right? Nope. The pathway to redefining aviation with 21st-century technology is complex and interdisciplinary. Recent history with very light jets and light-sport aircraft confirms this. Contrasting cultures must merge — between the people who are driving technology innovation and the community that has tested, refined, and driven aviation to its current levels of safety and maturity. Each community has a lot to learn from the other. 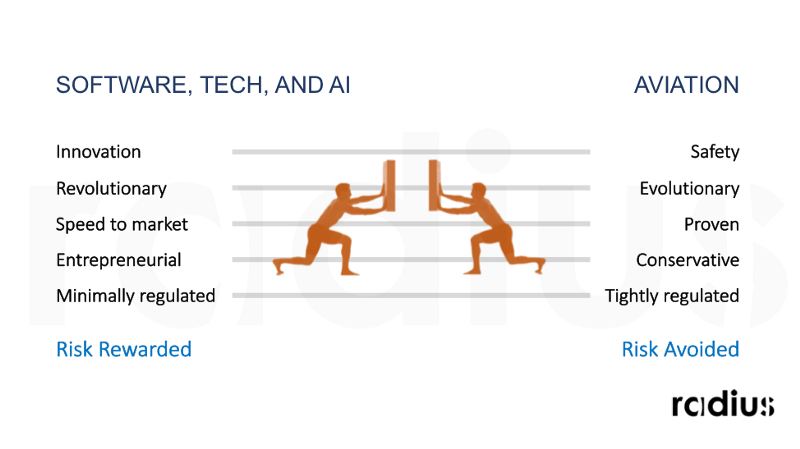 With this as the challenge, investors naturally ask each other how aerial mobility will get funded — questions around the investment thesis, timeline, capital intensity, and gaps to address in this endeavor. For now, internalizing why this is worthwhile will guide us to answer how to make it so.

Focusing on the hurdles and timing to commercialization, platforms requiring fewer changes to regulations or infrastructure will commercialize first. For example, electrically propelled fixed-wing airplanes can be flown by today’s pilots, use today’s airports, and operate within today’s air traffic control system.

Yet, the operating cost reduction they deliver is compelling versus the aircraft they replace. Small training aircraft are seeing direct operating costs drop from $150/hour to under $30/hour. Apply this technology to short-haul regional airplanes and they can experience a 70% drop in passenger-seat-mile costs, making them a cheaper option than driving.

This has both direct market appeal for the aircraft, but also interesting second-order impacts. They will bring real change to how and when people fly and will drive new traffic through our nation’s 5,000 regional public airports. These airports haven’t had meaningful capital investment for 40 to 50 years. Likewise, the fleet operations business model will evolve as more vehicles are employed in on-demand mobility networks.

eVTOL aircraft take the capability set even further. Able to operate vertically, they vastly increase the potential for point-to-point operations. However, their uses are not limited to carrying passengers over cities. Their utility as a cargo logistics tool, an air ambulance, and for access to remote locations over water or terrain shouldn’t be underestimated.

The commercialization of an aviation platform lowers barriers to its adoption. With this, innovators across the economy will apply it to use cases solving problems specific to their industry. This breadth of application reflects the flexibility of aerial mobility as a nodal network. My article, The Big Picture — Aerial Mobility as Nodal Transportation, elaborates and places this in historical context. In future posts, I will give more attention to the rollout of the other platforms and associated opportunities. 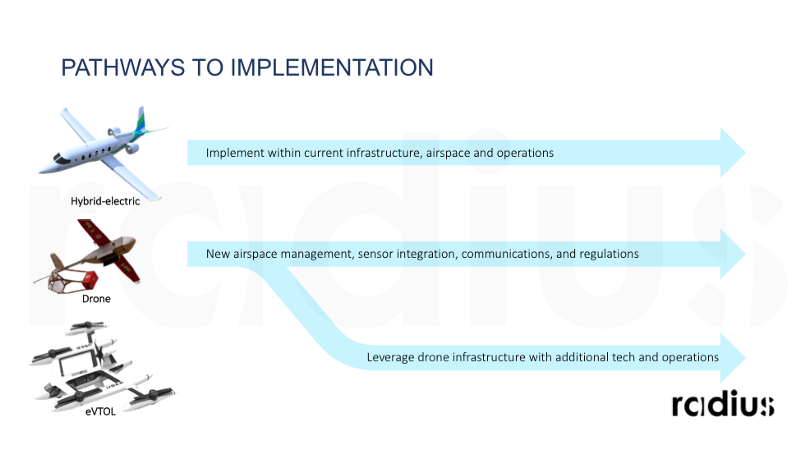 We are at perhaps the most exciting time in aviation since Charles Lindbergh’s Atlantic crossing. When we look back to history to either reinforce or temper our present-day aspirations, we see a persistent vision meeting fundamental technology changes. The proof points that convince us we will build this next generation are already flying. Our challenge now is to coordinate our efforts as an industry to implement this vision with purpose.

About Peter Shannon
Peter Shannon is a partner at Levitate Capital and an investor in advanced aerial mobility, formerly in sustainability and tech. He is also an entrepreneur and software engineer, as an Editor for Radius Mobility.