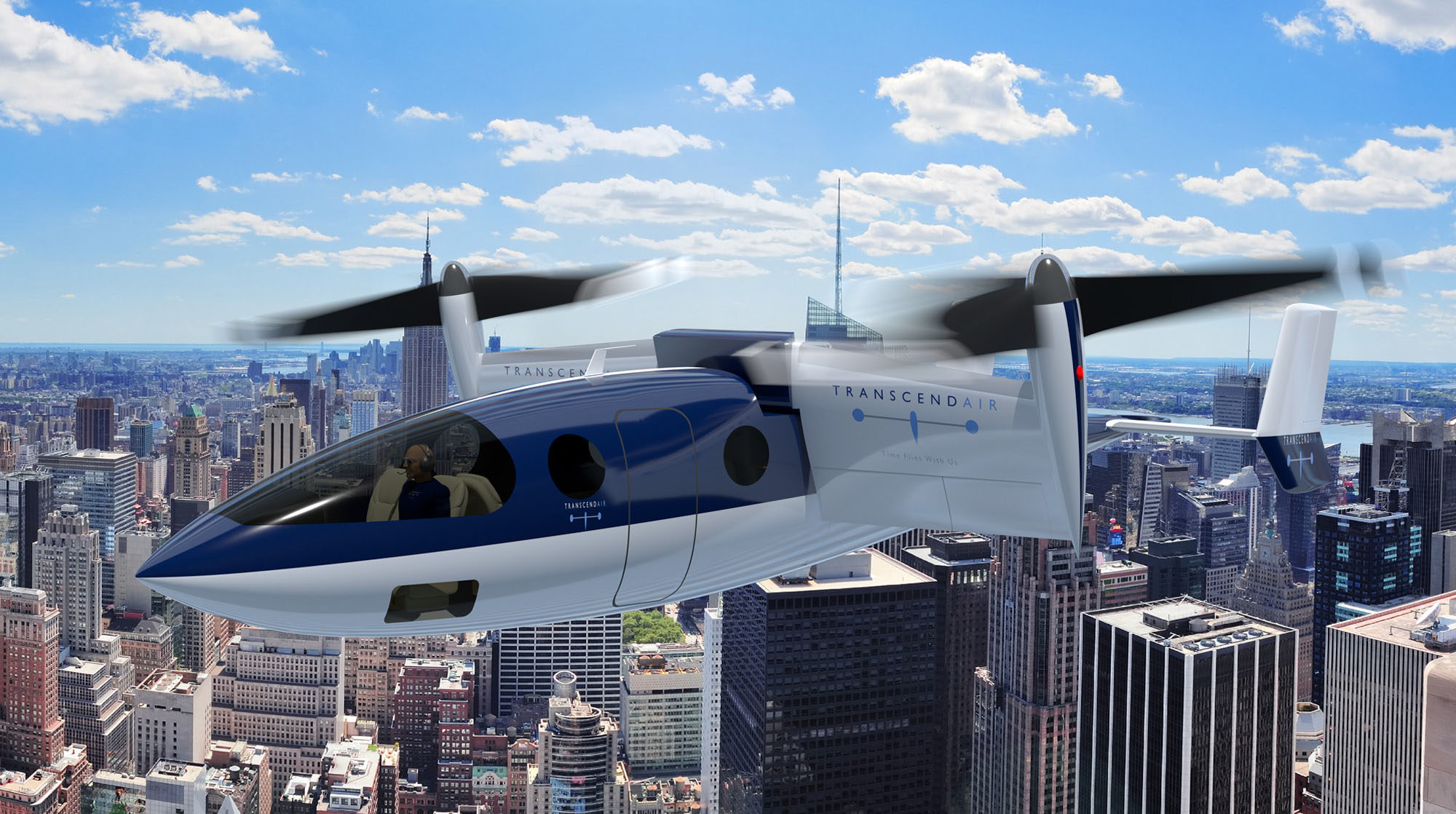 The Transcend Air Vy 400 is a luxury-interior vertical take off and landing aircraft designed for Transcend Air's 'VIP' air taxi service set to launch in 2024. The initial three routes the company plans to offer are NYC to Boston, LA to San Francisco and Montréal to Toronto for prices between $280 and $330. The company claims that the aircraft is ready to build due to its use of proven technologies already on the market. The aircraft itself will sell for about $3.5 million. Founder Greg Bruell is an entrepreneur, engineer, and VTOL expert. He was the Co-Founder of Elytron Aircraft. There, he built the S2 manned tilt-wing prototype. He was also an investor in Martin Jetpack, and a Product Manager at Agranat Systems. Prior to that, he was CTO at Silverback Technologies and Chief Architect at Bay Networks.

Transcend Air's team is made of 20 experts in aerospace engineering. from companies like Bell, Boeing, the FAA, Delta, Jet Blue, National Test Pilot School, and NASA.

Propeller Configuration: 2 mechanically linked lift fans, which enable it to take off and land vertically like a helicopter. In flight, a fixed wing that tilts into position for a cruising speed three times that of a helicopter.

Fixed wing flight: Uses two propellors, which tilt with the wing for vertical use as well.

Regulation: Transcend Air has already started certification discussions with the FAA and expects FAA certification to be achieved in 2024. It plans to start test routes between Boston and New York City in 2024. Neither its aircraft nor its planned service require any new regulations or air traffic control systems. Members at Transcend Air include former employees at the FAA and at Linear Air, a Part 135 online charter marketplace.

Our Take on Transcend Air

Transcend Air jumped onto the aerial mobility scene in September 2018. While the company claims to have been developing prototype models since its founding in 2009, it has flown relatively under the radar until now. This may be because it was waiting until it had reached a certain stage of development before making itself publicly known, or because it was waiting until it could set a launch date with as much certainty as possible. While not much is yet known about Transcend, its team seems to be qualified, with a concept that shows reasonableness in terms of configuration given its selection of power plant. With all the intra-city  VTOL services for the general public being released like Uber and Lilium, there is certainly a market space for the longer range city-center to city-center regional airline service Transcend Air is offering. Transcend tackles a different problem than the eVTOL/UAM players: it focuses on the current frequent business traveler who doesn't like the cost or time/hassle of traveling by private jet or commercial airlines between cities, and provides them with a point-to-point affordable solution. However, no prototypes of the Transcend Air Vy have been built, or at least publicly shown, to date.