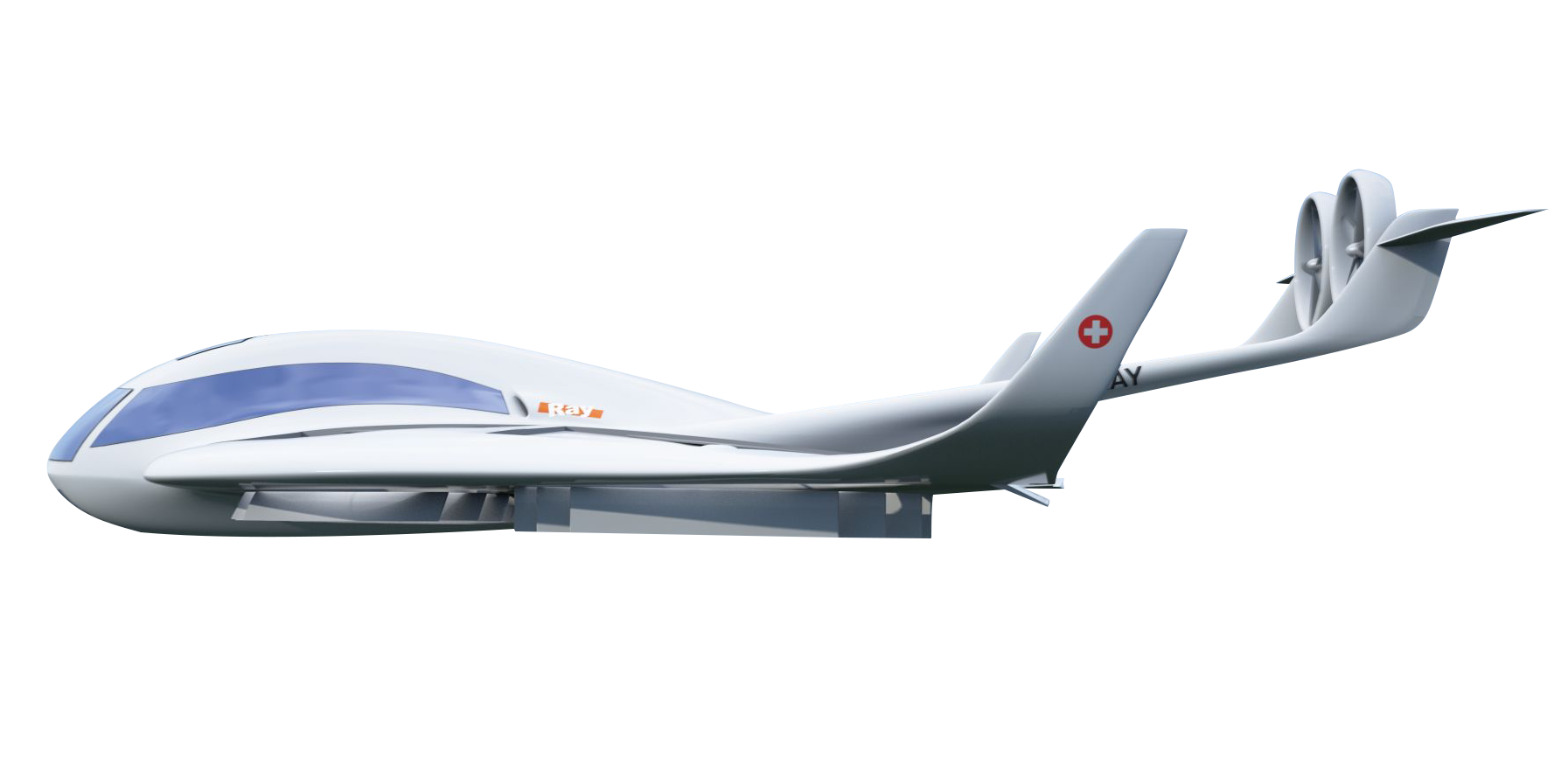 The Ray Civil VTOL Aircraft is being developed by Ray Research AG in Muttenz, Switzerland. The "Ray" VTOL is named such because it resembles a Manta Ray, and features two ducted fans at the rear of the craft for propulsion and two in each wing for additional power.

The Ray aircraft can take-off and land vertically. It needs no runway - like a helicopter.

In comparison to near future helicopters the Ray has the following properties:

The first series of Ray aircraft is designed for 4 passengers and one pilot.

The lift for vertical take-off and landing is generated by the four wing-fans. For cruise flight the wings get closed. The Ray aircraft is as independent as a helicopter (=no runway needed) and almost as economic as a conventional aircraft.
This results in an extremly independent aircraft with a fast cruise speed and a long range for an acceptable price.

“Each wing encases 2 relatively big fans arranged behind each other, which leads to an exceptional deep wing and a low wing loading. When high enough the two tilt-ducts in the back are tilted to horizontal and accelerate the Ray aircraft. As soon as the wings fully support the aircraft we close them and fly almost as efficient like a conventional aircraft. The Ray has further improvements for control, security, economy and performance….”

Number of passengers: 4, and 1 pilot

*Note: The company also released in June that it had designed the Dart Flyer, for the Boeing Sponsored GoFly competition.

Our Take on Ray Research

The blended wing body (BWB) design of the Ray Research VTOL is becoming increasingly popular among futuristic aerospace design concepts as it minimizes the amount of interference with the incoming airflow, and more closely approximates the shape of a bird flying through the air. Ray's concept combines the BWB with two turbines that drive six electric motors, which in turn power propellers that lift the aircraft vertically and then divert air rearward to facilitate accelerated forward flight. Because of Ray Research's concept is technologically sound, the biggest hurdle for the company is most likely manufacturing oriented - there does not exist a large amount of tooling that is readily available for construction of a BWB aircraft. If Ray Research can overcome this challenge, then their next target should be successful flight testing in coordination with a regulatory agency willing to certify their aircraft.