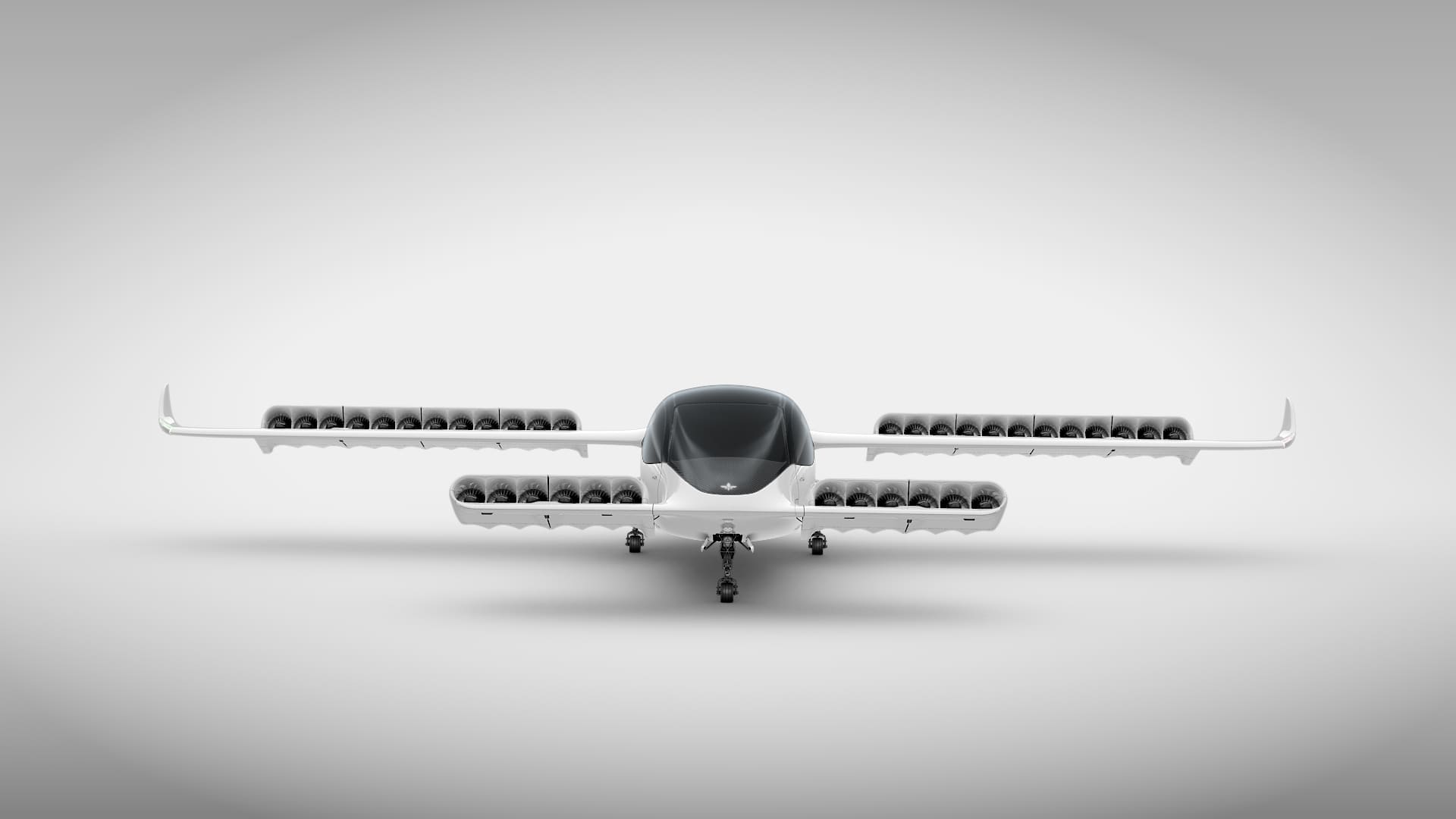 The Lilium Jet is an eVTOL designed and manufactured near Munich, Germany. The Jet uses swiveling ducted fans to provide vertical thrust for takeoff and landing. These same fans then slowly rotate towards rear facing as the Jet accelerates and converts to its forward flight mode.

Lilium, a Munich, Germany based company

"At Lilium, we have invented a completely new aircraft concept for the modern age. While vertical take-off and landing (VTOL) itself is not new – after all, quadcopters, tilt rotors and tilt wings are well-known concepts – we did not want to accept the compromises inherent to these configurations.

Quadcopters excel with their simplicity but are highly inefficient in cruise flight. Transition aircraft can fly three times faster and ten times further with an equally sized battery, but system complexity is usually much higher.

So, the goal was set: defining a transition aircraft concept with better performance in safety, noise, speed, range and payload than existing concepts, while cutting complexity to one third.

We challenged physical limitations, mechanical complexity and energy laws, until we came up with something new and unique. Something simple and efficient."

One Flap,
Covering it All.

The beauty of this system is its simplicity. In comparison to existing concepts, Lilium Jets require no gearboxes, no foldable or variable pitch propellers, no water-cooling, and no aerodynamic steering flaps. Just tiltable electric engines.

What’s more: The Lilium Jet has the highest possible structural efficiency. As we can provide differential thrust from the engines in cruise flight, no stabilizing tail is necessary.

The design of the electric engines ensures a very low drag coefficient in cruise flight, leading to a higher speed and range. The energy consumption per seat and kilometer thereby becomes comparable to an electric car – but the jet is 3 times faster.

The Lilium Jet uses an integrated high-lift system. The objective is to increase the lift of the wings even at low speeds to save energy. While hovering is very energy-consuming, as an aircraft must provide thrust equal to its own weight, dynamic lift of wings consumes much less energy to stay aloft. So, it is important to create as much dynamic lift from the wings as possible, even at very low speeds.

The electric jet engines work like turbofan jet engines in a regular passenger jet. They suck in air, compress it and push it out the back. However, the compressor fan in the front is not turned by a gas turbine, but by a high performance electric motor. Therefore, they run much quieter and completely emission-free.

Our Take on the Lilium Jet

The Lilium Jet is sleek, fast, and successful thus far in flight testing. Lilium has produced (in under 5 years) a very viable prototype eVTOL with a target entry to market of 2025, and a target first manned flight in early 2019. Given their past timeline and rate of progress, both of these goals seem achievable by the German team. Furthermore, the company has gone to great lengths to ensure that their entire experience matches the design paradigms of their eVTOL, and that they make no compromises in safety or the operation of their eVTOL. While keeping relatively quiet in terms of public demonstration flights, the videos depicting flight testing of the Jet are impressive enough on their own and should be a good indicator for future success of the company.