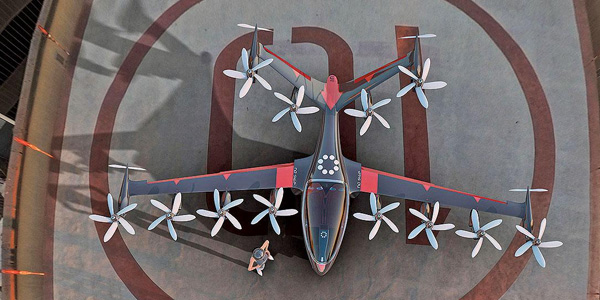 Joby Aviation is a Santa Cruz based company developing the Joby eVTOL (possible type name S4 according to FAA registration records). The S4 has been kept under wraps from the public as the Joby team continues design on the craft. Despite a small public presence, the Joby team is extremely experienced and has executed on numerous projects in the past that demanded a high degree of technical acuity.

The company has not released any technical details on the S4, only CFD models and some configuration sketchups. The S4 is a six tilt-rotor design; the rotors point upwards during takeoff and landing so that minimum groundspeed is required, and then rotate forwards as acceleration into normal forward flight occurs. It is known that the first flight was on February 1st, 2018 where the prototype took off and completed a 15 minute, 15 mile loop according to Bloomberg:

"The pilot managed a vertical takeoff, 15 minutes of flight in a 15-mile loop, and a safe landing. Powered by electric motors and sophisticated control software, the taxi performs like a cross between a drone and a small plane, able to zip straight up on takeoff and then fly at twice the speed of a helicopter while making about as much noise as a swarm of superbees."

Our Take on Joby

Joby's small media presence seems to be by design - Joby's team has been working with maximum intensity on bringing the project to fruition and testing their full scale S4 prototype. Once it's fully functional, chances are there will be a large amount more if attention drawn to the company, as the level of experience Joby Aviation maintains will only contribute to a better final product.