Vertiport Builder Skyports raises £5.35 Million in Series A Funding Round

Skyports, an urban air mobility infrastructure provider and drone delivery operator, announced on December 5th that they’ve raised £5.35 million in Series A funding.  The funding round was jointly led by Deutsche Bahn Digital Ventures (DBDV) and Groupe ADP. Levitate Capital also participated in this funding round following their seed investment in the company in January 2018.

Skyports’ mission is to “connect the world through our skies by building and operating critical infrastructure for urban air mobility and managing end to end drone deliveries” and is based in London, with projects in Asia, Africa, North America, and Europe.

This capital allows Skyports to continue its mission plan: acquire sites for passenger and cargo vertiports in cities around the world, including Singapore and Los Angeles, and develop said sites. Following the Singapore showcase of the world’s first passenger vertiport in October – the VoloPort – in partnership with air taxi manufacturer Volocopter, Skyports has received substantial interest from landlords in the city state and other cities around the world.

Duncan Walker, Chief Executive Officer of Skyports, commented on the recent close of the Series A round:

“We are delighted to welcome strategic investors with a long-term vision for the company. Our investors bring expertise in mobility, infrastructure and airport operations. Their significant balance sheets and strong leadership in their respective markets allow Skyports to consolidate its leading position in the industry in these early stages and through to permanent commercial operations in multiple markets.” 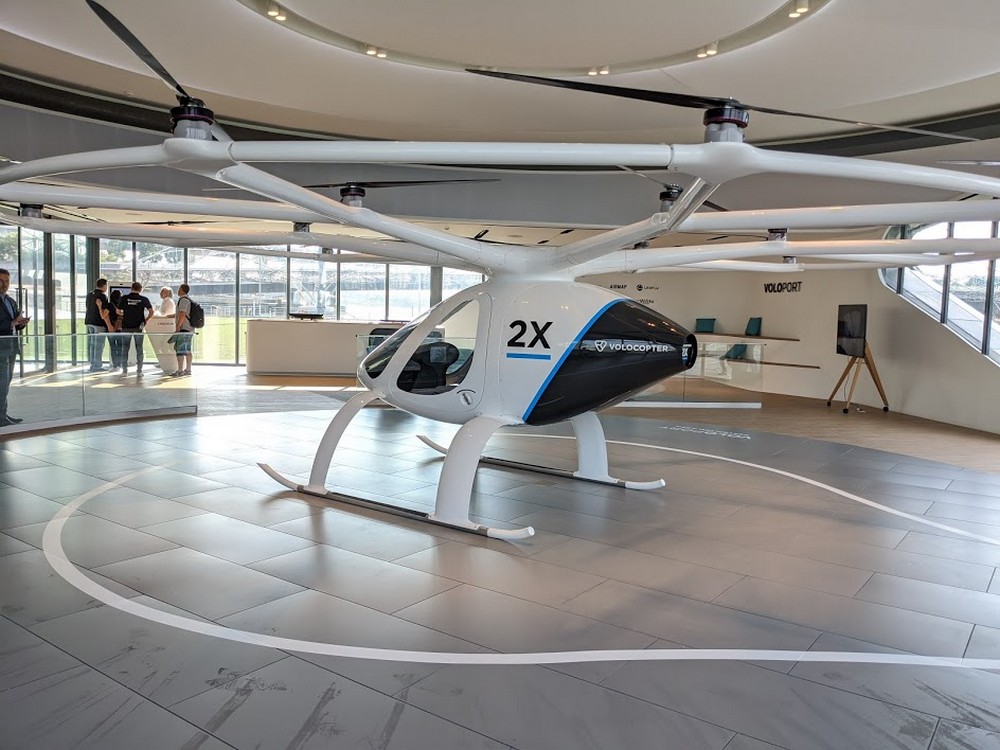 The inside of the Voloport in Singapore, the world’s first vertiport constructed to allow future air taxi riders the chance to better understand the customer experience of aerial mobility.

“Vertical take-off and landing (VTOL) vehicles are a new expression of airport activity – infrastructure, vehicle handling and passenger experience – and we are setting ourselves up to play a leading role in the development of Urban Air Mobility in the Paris Region and internationally through our 25 airports worldwide,” said Edward Arkwright, Deputy Chief Executive Officer of Groupe ADP. “This strategic partnership will allow us to develop a deeper understanding of the emerging VTOL market and will provide strong synergies through Skyports’ expertise in urban areas.”

The urban aviation market is anticipated to be worth $1.5 trillion by 2040, $850 billion of which due to passenger vehicles and $400 billion by the transportation of goods by drone, according to a Morgan Stanley study. Significant investment has gone into the vehicles and research and development enabling technology whilst urban air mobility (UAM) infrastructure is under-invested. Without the take-off and landing infrastructure in place, the nascent UAM industry will fail to realize its market and socio-economic potential.

DBDV and Groupe ADP will take seats on the Skyports Board. Skyports has the option for a second close in the Series A round in the near future.

Groupe ADP develops and manages airports, including Paris-Charles de Gaulle, Paris-Orly and Paris-Le Bourget. In 2018, the group handled through its brand Paris Aéroport more than 105 million passengers and 2.3 million metric tonnes of freight and mail at Paris-Charles de Gaulle and Paris-Orly, and more than 176 million passengers in airports abroad through its subsidiary ADP International. Boasting an exceptional geographic location and a major catchment area, the Group is pursuing its strategy of adapting and modernizing its terminal facilities and upgrading quality of services; the group also intends to develop its retail and real estate businesses. In 2018, group revenue stood at €4,478 million and net income at €610 million.

Levitate Capital is a venture firm focused on next-generation air mobility. They see the coming revolution in how people use and experience aviation for transportation, logistics, and other use cases as one of the profound transformations of modern society. Their investments cover a broad range of ventures, from enabling systems that will let these craft fly electrically, autonomously, quietly and safely to building and operating the new air vehicles as well as business models that will complement aerial mobility networks of the future.

Why it’s important: This additional financial commitment to Skyports will allow the company to further advance its developments of vertiports across the world, and also reinforces the latent demand for construction of the infrastructure to support sustained, scaled commercial air taxi operations in the 5-10 year time frame. The unveiling of the Voloport in Singapore generated a significant buzz amongst industry members and the general public alike, as it was one of the first instantiations of a physical vertiport that allows individuals to understand what a potential customer experience of an air taxi flight would look and feel like. Expect Skyports to ascertain whether future additional funding is prudent, or whether the company devotes all focus to development of further refinements to their vertiport technology.