Vertical Aerospace has received a major investment from the Aerospace Technology Institute (ATI) to fund the development of a smart charger network for its VA-1X eVTOL aircraft. Working in partnership with Warwick University, the two-year project aims to usher in a new wave of aviation battery technology, with marked improvements in battery lifetime, maintenance time, and anomaly prevention. The smart charger system is expected to be completed by October 2022.

“The collaboration between Vertical and Warwick University will take cutting-edge electrochemical concepts and principals from academia and apply them to the production of a charger with an incorporated diagnostic device, effectively a smart charger.” Photograph: Vertical Aerospace

The main feature of the smart charger will be an incorporated diagnostic device, which will allow the charger to oversee and analyze real-time in-flight and charge event data, such as battery lifetime, state of charge, and potential failures onboard the vehicle’s battery. The diagnostic device would then allow the charger to make adjustments that would optimize battery lifetime, schedule maintenance automatically, and report any anomalies before they happen.

According to Limhi Somerville, Head of Energy Storage at Vertical Aerospace, “Battery systems including charge and diagnostics testing are well-known in academia and industry; having undergone years of development and research for the automotive market. An aerospace application provides a fantastic opportunity to utilize methods, designs, models and algorithms that were not financially, volumetrically or technically feasible before. Using these novel approaches, we plan to significantly improve the safety, range and capability of our battery system.” 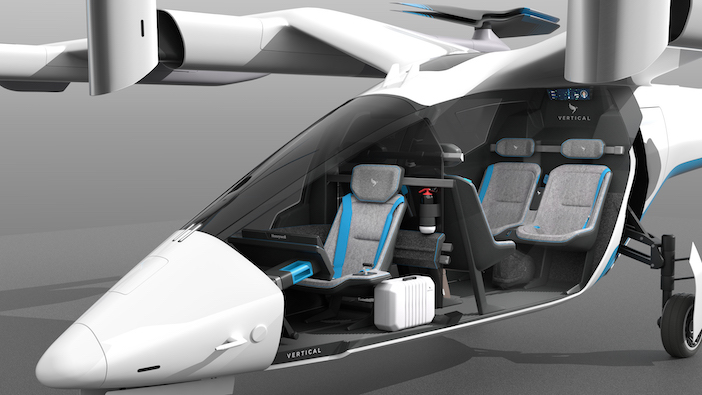 “The smart charger will be used in conjunction with Vertical’s recently unveiled passenger model, VA-1X, to increase the performance and further enhance the aircraft’s safety levels.” Photograph: Vertical Aerospace

To help with the development of this project, technical experts from Warwick University will be working on the algorithms needed and compare with similar models from other industries. The finished algorithms will be implemented into the smart charger, which will be tested on one of Vertical’s aircraft. After testing is complete, Vertical Aerospace intends to implement the smart chargers on their recently unveiled passenger model VA-1X. The VA-1X can hold up to 4 passengers and 1 pilot, and will be capable of flying at speeds of 150 mph with a range of 100 miles. Vertical Aerospace looks to certify the VA-1X in early 2024, and begin commercial services soon after.

According to James Marco, Professor at University of Warwick, “The successful integration and management of battery systems within future electric aircraft represents a significant research challenge and one that WMG is excited to be working on in partnership with Vertical Aerospace. This project will allow us to expand our capabilities in battery characterization, battery system modeling and novel methods of fault diagnosis and prognosis. All within a sector that is strategically important for the UK as it move towards its zero emissions transport targets.”

“Capable of traveling 100 miles at 150 mph, carrying four passengers and one pilot, VA-1X is set to be the world’s first certified winged eVTOL with initial commercial operations starting in 2024.” Photograph: Vertical Aerospace

Why it’s important: Recent commercialized developments in battery technology have mostly come from the automotive industry, meaning that those batteries are not optimized for aviation gravimetric energy or power density requirements. With Vertical Aerospace and Warwick University’s new smart charger project, battery technology in the electric aviation industry will take another step forward, creating opportunities for the entire aerial mobility industry as well.