XTI Partners with VerdeGo Aero for Its Hybrid-Electric Cargo VTOL

Although both companies were originally developing their own eVTOL aircraft, VerdeGo transitioned to becoming a provider of IDEP (integrated distributed electric propulsion) systems in September of 2018. Since then, VerdeGo has become a prominent leader in providing electric and hybrid-electric propulsion systems for new kinds of VTOL aircraft, and has formed partnerships with major industry players such as Seyer Industries and Continental Aerospace. Most recently, VerdeGo tested a production-ready version of its hybrid-electric powertrain, and optimized its diesel-hybrid generator for commercial applications.

VerdeGo’s partnership with XTI may be its most important yet. For several years, XTI has been working to develop the XTI TriFan 600, a passenger hybrid-electric VTOL with impressive passenger capacity and speed and range performance statistics. Now, XTI has chosen to extend its offerings by adding a smaller, autonomous, cargo & logistics aircraft called the TriFan 200. This may be a very wise move for the company as it will help their flight technology reach more market segments and applications. The TriFan 200 will be powered by VerdeGo’s diesel (Jet-A) hybrid-electric powertrain.

According to a recent press release by VerdeGo, XTI and VerdeGo’s collaboration on the TriFan 200 will lead to outstanding operational flexibility, operating economics, and mission capability. When the program reaches commercial development and certification, the TriFan 200 aircraft will be an unmanned autonomous aircraft capable of transporting 500 lbs of cargo on missions of more than 200 nautical miles. Said Robert Labelle, CEO of XTI, “The TriFan 200 aircraft will open up a significant new market for XTI to address the needs of cargo and logistics operators globally. We are excited to be partnered with VerdeGo to leverage their experience with hybrid powertrains combined with our experience from the TriFan 600
program to create an efficient, economical, profitable VTOL aircraft for fleet operators
worldwide.” 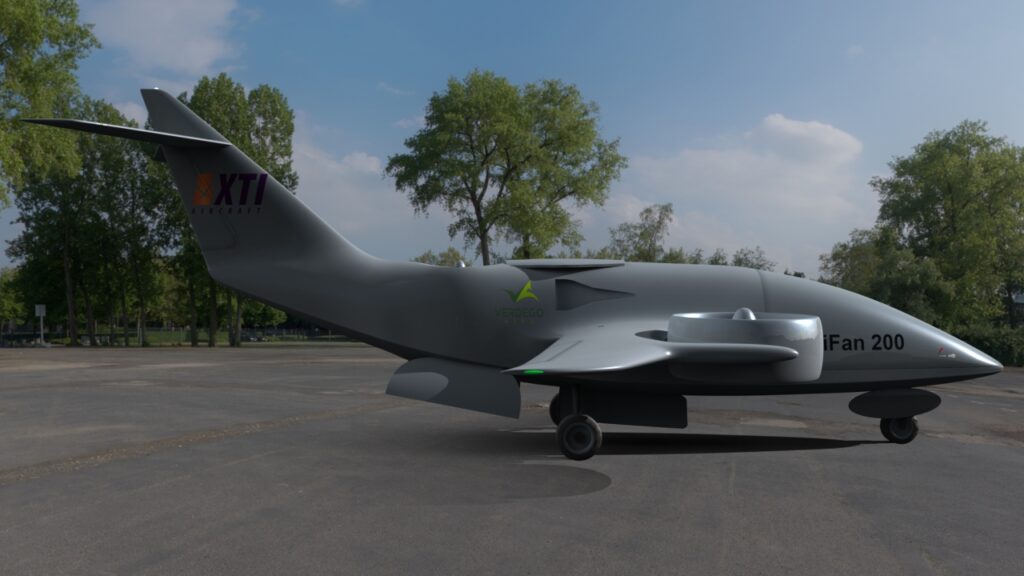 Rendering of the XTI TriFan 200 pre-flight

Why it’s important: As the era of electric and hybrid-electric VTOL aircraft inches closer to reality, it’s becoming apparent that initial use cases (especially for autonomy) will often be for cargo and logistics missions. The XTI TriFan 200 will fit this market need perfectly, allowing companies to move cargo far more quickly and efficiently than ever before. Specifically, the TriFan 200 will rapidly connect global air cargo hubs with distribution points throughout major cities, reducing the need for ground transportation of urgent deliveries. With this partnership, XTI furthers its market offerings, and VerdeGo Aero proves its capability to provide effective propulsion systems.