As the world starts to return to a new-normal living in the wake of COVID-19, VoltAero has announced its final production configuration for its eVTOL prototype dubbed Cassio. The company has already begun flight testing on its Cassio 1 testbed and plans to begin deliveries by the end of 2022.

In March, the company began testing its power-plant technologies on its testbed, Cassio 1, based on a modified Cessna 337. The forward facing propellers will not be like those in the announced in the final production configuration, the test configuration simply allows for easier integration without major modifications to Cassio 1. The goal of Cassio 1 is to validate the two Safran ENGINeUS™ 45 electric motors and an aft-facing internal combustion engine.

The French company will offer 3 variants in its product lineup: 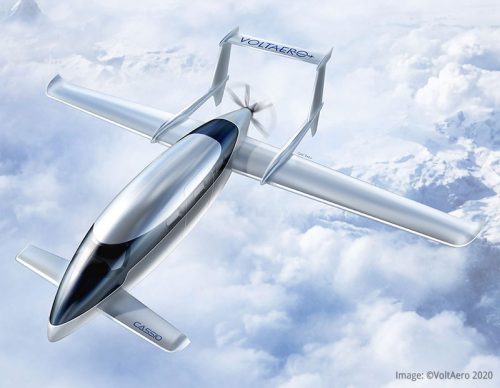 This diverse product family will offer flexibility to a variety of customers and mission requirements. The Cassio family will be able to offer up to 920 nm of range at a 200-knot cruise speed. Further, the aircraft will be certified under EASA CS-23 requirements, offering more flexibility for pilot type certification and operation.

Why it matters: VoltAero’s configuration is a logical intermediate between general aviation purpose-built aircraft seen today and eVTOL aircraft of the future. It will offer a familiar configuration to the aviation community while taking advantage of technologies including a composite airframe and hybrid-electric power-plant. We also view the technical pedigree at VoltAero to be ahead of the competition in the UAM space. Expect to see more as VoltAero continues flight tests and begins production on a greater scale.