VoltAero’s Cassio 1 demonstrator aircraft is beginning a “Tour de France” today which intends to reaffirm the company’s commitment to developing a family of hybrid-electric airplanes for sustainable regional air transportation. Departing from France’s Atlantic seaport city of Lorient on July 5, Cassio 1 will make 10 stopovers in a flight plan that covers destinations in the country’s north, east and south, before returning to the west for its conclusion on July 11 at Rochefort. This first-ever travel circuit of its type by a hybrid-electric aircraft will involve stopovers at Tours, Le Havre, Toussus-le-Noble (in the Paris region), Troyes, Dijon, Annecy, Aix-en-Provence, Nimes and Toulouse. 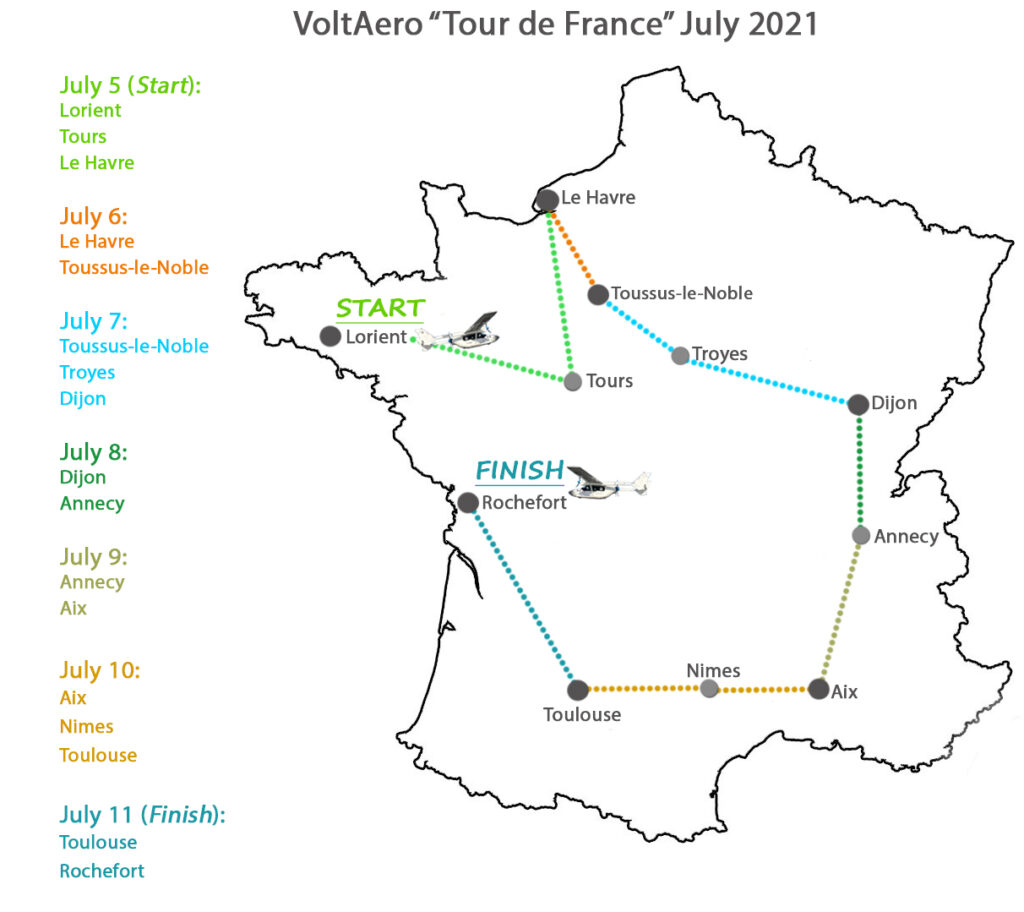 The trip’s segments represent typical regional short- and medium-haul flights that can be efficiently served by hybrid-electric aircraft, bringing clean, quiet and efficient air mobility to local airports. Overall, the hybrid-electric Tour de France will cover a distance of more than 1,440 nautical miles (2,600 kilometers) for a combined flight time of approximately 28 hours. “With Cassio 1’s French tour, we are providing realistic examples of how our future family of Cassio airplanes will bring reliable and eco-friendly air service to regions that – more than ever – require such connections,” explained Jean Botti, VoltAero’s CEO and Chief Technology Officer. “Such service will have the full benefits of low-noise operations and reduced CO2 emissions that come with hybrid-electric aviation.” Supporting VoltAero during the Tour de France will be French airport and infrastructure operator Edeis, which is providing logistics assistance as the partner during this trip. Landings are to be made at eight of the 19 airports managed by Edeis in France. Guided visits of Cassio 1 and on-site briefings by VoltAero are to be performed at each destination. Attendees invited for the stopovers include elected officials, business leaders, air service providers, airport operators and other key players in transportation infrastructure. The Cassio 1 demonstrator aircraft is a flying testbed utilized by VoltAero to validate its proprietary hybrid-electric power module – which combines electric motors and an internal combustion engine. With its multiple sources of energy, the hybrid-electric power module provides highly safe and efficient operations by utilizing one source of power (electrical or mechanical) – or both – depending on the flight scenario. In a typical trip, the module’s electrical motors would be used for nearly-silent takeoffs and landings – with the internal combustion engine serving as a range extender once Cassio is airborne, and also recharging the batteries.

To date, the performance and capabilities of VoltAero’s hybrid-electric power module have been proven during more than 105 flights of the Cassio 1 demonstrator aircraft, logging 76 total flight hours. The hybrid-electric power module concept that is integrated on Cassio 1 will be used for VoltAero’s family of production airplanes. Also installed on the Cassio 1 demonstrator aircraft are two forward-mounted Safran Electrical
& Power ENGINeUSTM smart electric motors, which VoltAero is using in performance verifications as part of its flight test program.

The first production Cassio aircraft version to be built will be the four-seat Cassio 330, with a combined hybrid-electric power of 330 kilowatts. Cassio 330 deliveries are targeted for the second half of 2023, to be followed by the Cassio 480 and Cassio 600, utilizing hybrid-electric propulsion rated at 480 and 600 kilowatts, respectively. Production Cassio aircraft are to have a cruise speed of 200 knots (360 km./hr.), with an airport take-off/landing distance of less than 1,800 feet.

Why it’s important:  VoltAero’s target market for the Cassio aircraft is the short to medium haul regional carrier that will benefit from the increased efficiency of electric propulsion, combined with enhanced dispatch reliability and compatibility with changing and restricting global emission and environmental constraints toward new air travel media. The “Tour de France” for the Cassio aircraft will serve as an opportunity to further advance those goals.