Volocopter to Make First Public Showcase in Singapore This Month

Volocopter has announced plans to fly its first public showcase this month at Singapore’s Marina Bay.

The company held a media event at the end of September and has reported the successful completion of numerous test flights in the hot and humid climate.

Since arriving in Singapore, Volocopter has received support from the Ministry of Transport, the Civil Aviation Authority of Singapore, and the Economic Development Board.

According to Volocopter co-founder, Alexander Zosel, Singapore was chosen for the demonstration as it is a candidate for the company’s first point-to-point network deployment. 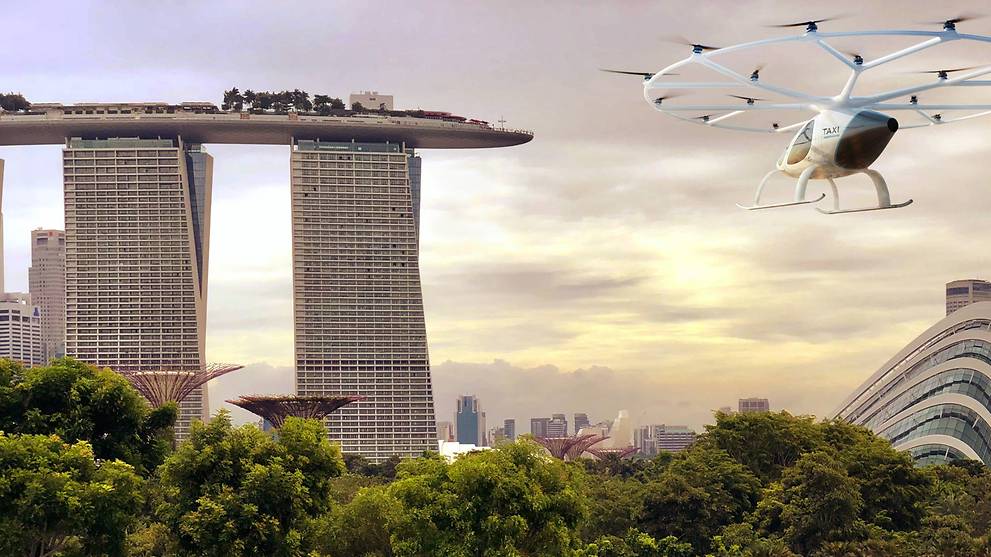 An artist’s impression of a Volocopter taxi flying near Marina Bay Sands.

“In the end, we want to have Volocopter systems here in Singapore as a public transport system for business travelers or tourists. The plan is to open the first route in the next two to three years, but this will be defined with the authorities, and that could be a tourist case or a business case for example from the airport to the business district,” said Mr Zosel.

During this time Volocopter and Skyports will showcase the world’s first full-scale air taxi vertiport prototype: The VoloPort. This infrastructure is a collaboration between Volocopter and Skyports to design and build a full-size vertiport prototype of the type of infrastructure that urban air taxis and their passengers can expect to use in the future.

“It’s a process. It’s also about growing partnerships with the ecosystem in Singapore. Not only with the authorities, also players like 5G network providers are very important to operate this aircraft, so we want to create an ecosystem here with different players.”

The flight is expected to take place as part of the Intelligent Transport Systems Worldwide Congress which runs from October 21 to 25.

Why it matters: This demo will be the first opportunity for the public to witness the flight of Volocopter 2X model eVTOL aircraft. The company has been featured on TransportUP recently for its demonstration of a staged medical rescue operation. Further, the use of the VoloPort will provide a glimpse into the future of aerial mobility infrastructure.