VerdeGo Aero was originally founded to create its own air taxi, but pivoted in 2018 to providing hybrid powertrain solutions for eVTOL air taxi aircraft and more, making its business proposition almost completely unique. Founder Erik Lindbergh (grandson of famous aviator Charles Lindbergh) made this decision in order to create a company that could provide propulsion solutions for other budding aircraft developers. According to VerdeGo, first versions of the powertrain will include for customers electric motors, wiring, and controllers, batteries, and piston or turbine generators. The company recently partnered with Continental Aerospace and Seyer Industries for development, and is now set to provide propulsion systems for aircraft developers ASX and Transcend Air. 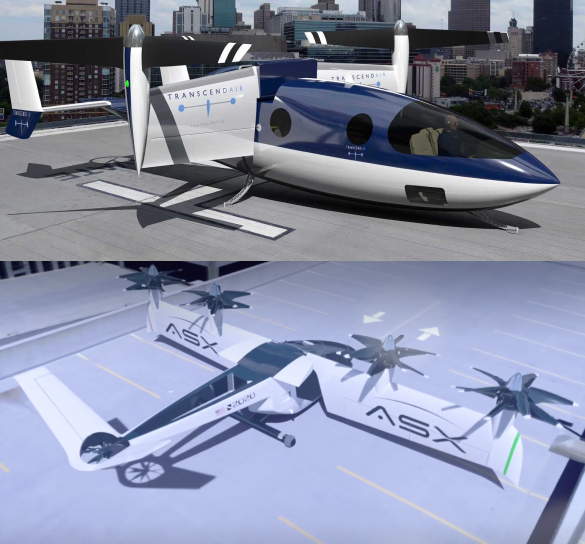 Top: The Transcend Air Vy400, Bottom: The ASX MOBi-ONE. Both these aircraft will be fitted with the VerdeGo Aero hybrid powertrain currently in testing.

This Week, CEO Eric Bartsch gave a company update during an Aviation Week UAM (Urban Air Mobility) online panel. Bartsch said:
“We’re now running at production power the most powerful piston hybrid system in the world down in our Florida headquarters in Daytona Beach. We’ve entered the test and refinement phase of that to get towards a conformal design to enter production with, so we’re really excited about that. And that’s moved from hardware that was under development to hardware that’s being tested to prove it every day.”

Why it’s important: VerdeGo’s transition into refinement testing marks a major milestone for the company. It not only represents near-completion of its mission, but has created the world’s powerful piston hybrid propulsion system, taking hybrid-electric propulsion to where it needs to be for vertical flight. If all goes well, we could very well begin seeing VerdeGo systems in the air within just a few short years.