Airflow, a company founded by the former developers of the Airbus Vahana project, is creating an hybrid-electric, short take-off and landing (STOL) cargo aircraft for medium-distance cargo transport. According to Airflow’s founders, the idea behind the eSTOL is to solve the need for cost-efficient, high-speed, middle mile transportation, without the need for increased airport infrastructure. For example, the eSTOL could provide transport directly between e-commerce warehouses on the outskirts of major cities.

To create this aircraft, which will use innovative distributed electric propulsion, Airflow has partnered with VerdeGo Aero. Founded by grandson of famous aviator Charles Lindbergh, VerdeGo Aero is one of the only companies providing IDEP (integrated distributed electric propulsion) solutions to new aircraft developers. VerdeGo has been gaining momentum in the IDEP industry, having partnered with Seyer Industries, Continental Aerospace, and XTI Aircraft for its new cargo VTOL. The company also recently ramped up its development process by optimizing its Hybrid Electric powertrain and propulsion system for production and commercial use.

While the Airflow eSTOL is not a VTOL aircraft, it seeks to solve many of the same cargo transport infrastructure problems that VTOL might, using the same innovative electric propulsion technology to limit infrastu. Airflow believes that by integrating middle-mile air transportation directly into warehouses, companies can move goods around much faster without major infrastructure development or operational costs. The below photo shows how warehouses might integrate an eSTOL directly into their rooftops: 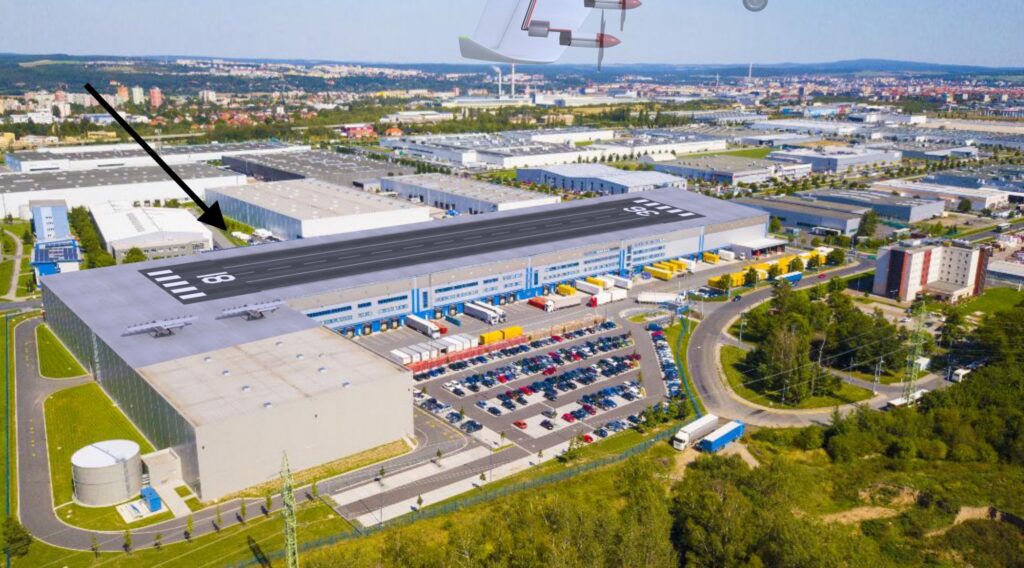 How warehouses rooftops could integrate with Airflow eSTOL operations

VerdeGo Aero’s diesel (Jet-A) hybrid system combines a 180KW generator with a high-power battery pack that reduces emissions and fuel burn by 35% compared to conventional turbine powertrains. Integrating VerdeGo’s hybrid-electric powertrain to the eSTOL platform enhances the aircraft’s mission capabilities by extending range to four to ten times that of a battery-electric system.

Said Marc Ausman, CEO of Airflow: “Our ability to rapidly move cargo from a warehouse directly to another warehouse helps e-commerce companies centralize inventory and reduce carrying costs. These capabilities are made possible by continued strategic partnerships like VerdeGo Aero”

Why it’s important: Like VTOL aircraft, the Airflow eSTOL will enable air travel directly between destinations, allowing companies to more efficiently and more quickly transport goods. Distributed hybrid-electric propulsion will make this technology possible for eSTOL as well as eVTOL, and by forming partnerships with Airflow as well as other key companies, VerdeGo begins to show mastery of the emerging market for this key technology.