Next2021 Expected to Bring New Wave of eVTOL Aircraft
Vehicles/Manufactures

Together, the Japan Aerospace Exploratory Agency (JAXA) and major Japanese transportation company Yamato Holdings have created a standardized cargo pod to be used on eVTOL platforms within Japan. The two organizations have worked together in designing and evaluating the aerodynamic shape of the pod concept, which they have named the PUPA8801. 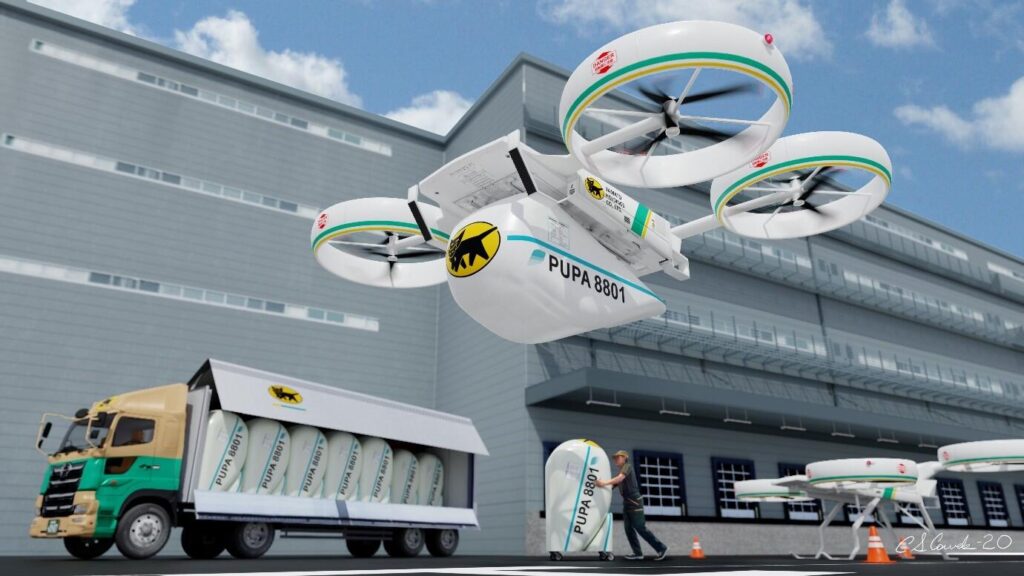 The Yamato Holdings Cargo Pod, shown here with modules being loaded onto a truck from an eVTOL.

The PUPA8801 is capable of carrying up to 400 kilograms (880 pounds) of cargo, which would make any multi-copter to carry it extremely competitive in the growing aerial logistics market. JAXA and Yamato created the pod to be as useful for intermodal travel as possible, which meant the unit had to be both aerodynamic for flight, and as rectangular as possible for efficiency of storage on a truck or other ground-based transportation. In addition, the unit had to be easily detachable and attachable to a wide variety of transportation options. For this, JAXA and Yamato took inspiration from years of experience in the existing intermodal transportation industry.

The PUPA8801 Cargo Pod had to be both aerodynamic for flight, and as rectangular as possible for storage on ground-based transportation.

This partnership is by no means JAXA or Japan’s first effort to promote aerial mobility. As early as 2018, Japan has been forming key partnerships, creating government summits, and writing important reports to help lay the groundwork for aerial mobility in the country’s future. Several major international companies have also either invested in aerial mobility in Japan or collaborated with the Japanese government, such as Uber, Subaru, Boeing, Bell, Volocopter, and more.

Why it’s important: Aerial mobility in Japan will eventually transition from small UAS package delivery to larger cargo delivery, and then from there to multi-copter passenger operations. By creating this cargo pod concept and many other aerial mobility initiatives, Japan indicates both its understanding of the industry, and its commitment to developing its future. Additionally, with this announcement, Yamato Holdings has begun to make a name for itself within aerial logistics, placing itself as a market provider for an important component of large UAS cargo delivery.