Skyryse is a Hawthorne, CA based startup with aspirations of developing semi-autonomous helicopters.

To date, the company has raised $38M and has talent from across the aerospace and automotive industries from the likes of Airbus, Boeing, Ford, SpaceX, Tesla, and Uber, among others. The Silicon Valley firm was founded in 2016 and retrofits existing helicopters with semi-autonomous features meant to reduce pilot workload in-flight. The company describes itself as seeking to re-imagine “urban transportation for the 21st century by making air travel a viable option for more people.” 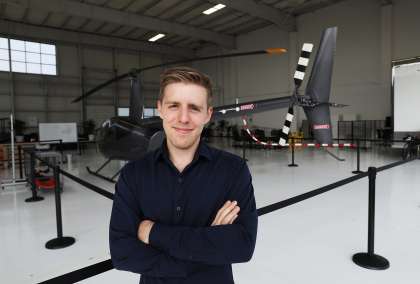 This round of funding includes previous round investors with the addition of Ford Motor Co. Chairman William Clay Ford Jr.

Skyryse’s business model is a stark contrast to the all-electric, clean-sheet prototypes scattered across the aerial mobility space today. The company has an opportunity to reduce its research and developmental costs by focusing on implementing new technology onto existing helicopter platforms.

Skyryse aims to make helicopters safer, quieter and more efficient. The company’s Flight Stack is designed to simplify flight controls, making the task of flying a helicopter simpler and hence safer. By doing so, helicopters using the technology would then become more viable for use in transportation services and scaled commercial operations.

“Urban air mobility promises a new transportation future, but short-distance flying has traditionally been too expensive for mass adoption,” SkyRyse said in a media release. “Automating critical parts of flight will make flying more affordable; however, wide urban flight usage also requires a safety and communications network that works as reliably and safely as commercial airline flight today. The Skyryse Flight Stack is the first step in creating an entirely new urban aviation system that will allow for safe mass deployment.”

Additionally, Skyryse aimes to include flight control automation with an array of sensors which will help to aim, steer, and stabilize the helicopter in flight. The company plans to implement their improvements under present air network management systems and regulatory agencies.

Why it matters: Skyryse has an opportunity to quickly deliver autonomy solutions to the existing aviation industry. These business models are a logical stepping stone to full-scale aerial mobility operations and all-electric eVTOL prototypes. The envelope protection features and simplification in crew resource management will be critical in making aerial mobility a commercial success.