Skyports, a drone delivery operator, announced on October 21st that it has created a joint venture with Irelandia to bring drone deliveries to Colombia and wider Latin America (LATAM). The joint venture will bring an innovative, fast, frequent and reliable logistics service to Colombia, providing a cost-effective solution to connecting Colombia’s rural communities. 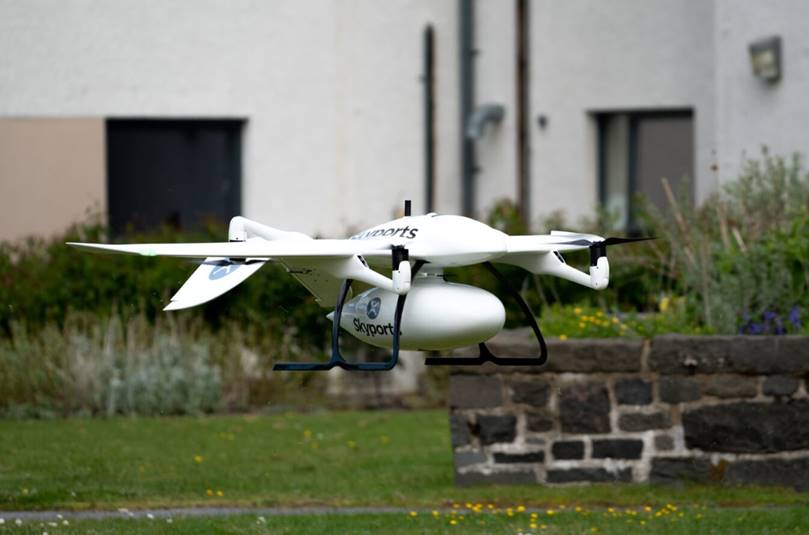 Skyports has also conducted trial COVID-19 response flights for the National Health Service in Scotland via partnerships with Wingcopter for drone delivery and Thales for airspace management. Photo // Skyports

The joint venture will be led by Skyports’ Bogota-based Colombia General Manager, Daniel Salamanca, who brings years of drone delivery experience and expertise to the project. Salamanca was also the first to receive approval for beyond visual line of sight (BVLOS) flights in Colombia on the Pacific Coast, where he worked with the national government and the presidency to transport blood samples from rural areas into central hospitals. These drone delivery trials benefited more than 1,200 people and waiting times for laboratory results was reduced by more than 75 percent.

The Skyports medical drone delivery trials will be the first of their kind for Colombia, with flights expected to commence around mid-2022. Drone delivery operations will be launched across remote areas of Colombia including La Guajira and Chocó, with a focus on carrying critical health supplies such as vaccines, pathology samples and HIV tests. The drones to be used on this project are provided by Australian drone company Swoop Aero and can carry up to 5kg, as far as 180km in harsh environments such as high altitudes, wind and rain.

The joint venture will build on from Skyports’ successful proof of concept trials which took place earlier this year, where Skyports partnered with the UK’s world-leading National Health Service in rural Scotland, transporting COVID-19 test samples, vital PPE and other medical materials by drone between medical facilities in isolated and difficult to reach areas. The successful trials reduced end-to-end delivery time by almost 95 percent – from what would have taken on average 20 hours through conventional delivery methods to just one hour via drone delivery.

Irelandia, a recognized low-cost airline developer, brings its deep aviation expertise to the partnership, through its previous ownership of leading airlines Ryanair, Tiger Air, Allegiant and Viva Aerobus. Irelandia’s current airline is Viva Air, based in Colombia and Peru. The Irish company has expertise in regulations, flight operations and commercialization, which will be a key asset for this project.

Why it’s important: This move increases exposure of Latin American infrastructure to beyond visual line of site drone operations, which are crucial for successful ultimate deployment of aerial mobility aircraft and flight guidance systems. Additionally, the political coordination required to enact these operational structures will pave the way for future operations of larger aircraft that carry fare-paying passengers or those being transported for EMS or first responder purposes.