SkyDrive, an aerial mobility aircraft developer backed by Toyota, has officially released footage of its SD-03 aircraft in flight with a passenger/pilot on board. The company also simultaneously announced a massive Series B fundraising round from the Bank of Japan and other investors.

SkyDrive’s SD-03 aircraft is a single-person small aircraft, meant as a personal commuter vehicle for the ‘skyways’ of the future. It is piloted by the sole passenger (rather than autonomous), and is powered by four sets of counter-rotating propellers. The current version of the SD-03 has only a ten minute flight time, but SkyDrive intends to increase that time to thirty minutes in order to expand the potential of the aircraft.

Until now, SkyDrive has been fairly quiet about its progress, but this latest release marks a major step forward for the company, which hopes to allow sales of its flying vehicles in Japan by 2023. According to SkyDrive, it is already working with the Japanese government on developing a plan for regulations and airspace management, making safety its top priority. Japan hopes to allow these vehicles for business use by 2023, and for commercial use by 2030. Read more about Japan’s plan for aerial mobility here.

In addition to the unveiling of its aircraft, SkyDrive also announced a major fundraising round from several major investors. The biggest of these is the Bank of Japan, but other investors include the Itochu Corporation,
ENEOS Innovation Partners, LLC Obayashi Corporation, Energy & Environment Investment, Inc., STRIVE, Inc.,
Sumitomo Mitsui Finance and Leasing Company, Limited, and more. In total, these investments come to ¥3.9 Billion, the equivalent of $37 million USD.

Said Mr. Yuki TAKEMORI, at the Innovation Promotion Office of the Bank of Japan:
“The “eVTOL” business is a harbinger of revolution in the sky. We are a step closer to what seemed like a distant dream now that (these) new companies have joined forces. The Bank of Japan will work with the stakeholders to help SkyDrive become a company that is widely embraced by public by staying tuned to its commitment to realize a secure, safe and comfortable social infrastructure”.

Said Tomohiro FUKUZAWA, CEO of SkyDrive:
“We want to realize a society where flying cars are an accessible and convenient means of transportation in the skies and people are able to experience a safe, secure, and comfortable new way of life. We also aspire to develop markets around the world, in collaboration with our partner companies, so that an urban air mobility society with aircraft supplied by SkyDrive becomes a reality not only in Japan but also across the globe.” 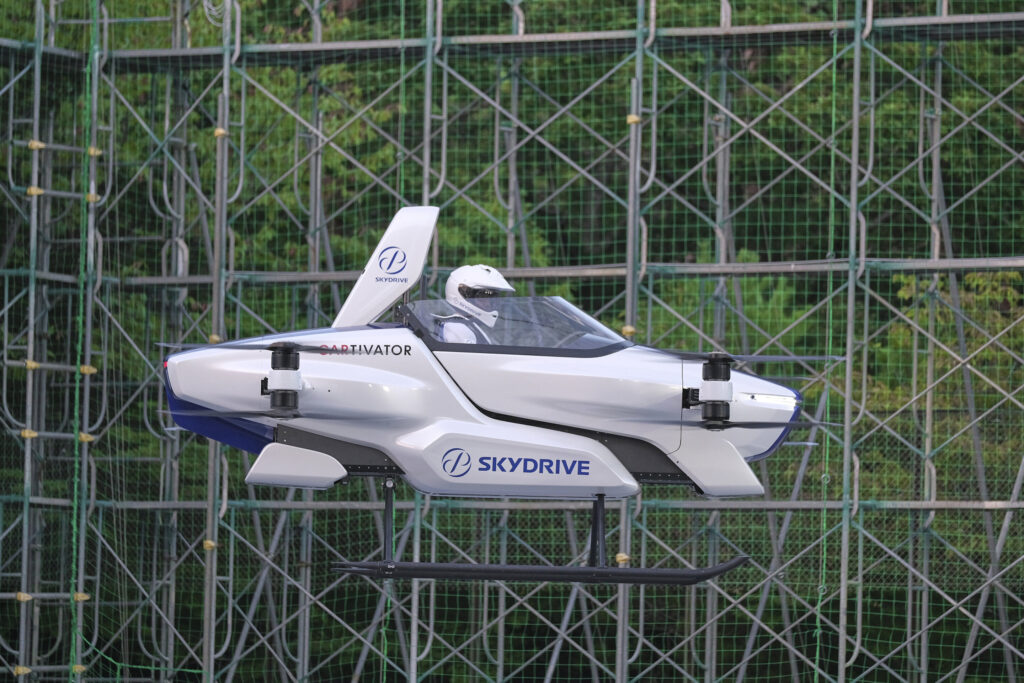 The SkyDrive SD-03 in Flight

SkyDrive will continue to conduct test flights under an expanding range of conditions in order to improve its technologies further and achieve full compliance with the safety provisions of the Civil Aeronautics Act in Japan. It currently is aiming to obtain approval for flights outside the limits of the Toyota Test Field before the end of 2020.

Why it’s important: Although SkyDrive had yet to publish any great amount of news, this announcement marks a major step forward for the company. Despite only being founded two years ago, SkyDrive has already produced a finished, passenger-functional prototype, which has made world headlines. With this achievement, SkyDrive sets its place among the multiple aerial mobility companies now releasing vehicles globally.