Although Varon Vehicles has in fact released images of a prototype ‘flying car’ design, the company has always been clear that it’s true goal is not to be a manufacturer of these vehicles, but to partner with expert aircraft OEM’s to create a ‘full transportation system’ for countries like Columbia and others in Latin America. As a partner, Varon’s vision is to provide integration of aerial transport into cities through working with regulatory institutions, designing vertiports, providing customer-end service, and even airspace setting up airspace integration and navigation. Essentially, Varon hopes to be the operator for eVTOL air vehicles for Latin American regions, as Uber might soon be in the United States. 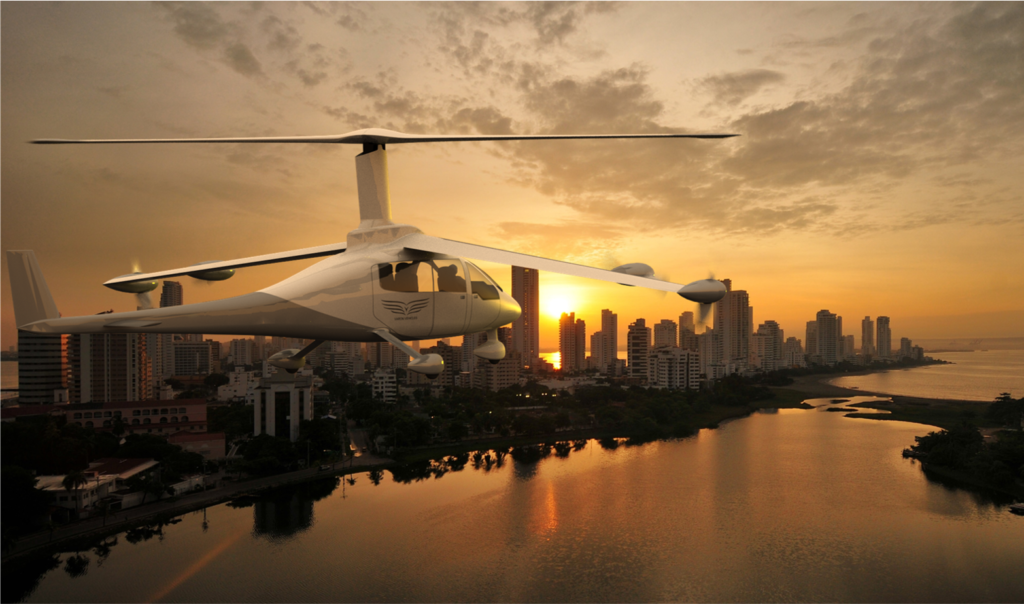 Jaunt’s ‘Journey‘ eVTOL featured in the skies of Cartagena, Columbia

Jaunt Air Mobility, meanwhile, is a celebrated designer of an eVTOL that includes a fixed wing, and uses slowed-rotor compound technology for vertical lift to increase efficiency and limit sound. Through these technologies, Jaunt’s ‘Journey’ eVTOL will be able to cover 70 miles in 25 minutes or less, and take-off and land from anywhere. Jaunt had previously partnered with Uber Elevate, and although Elevate has now been acquired by Joby Aviation, the partnership showed Jaunt’s readiness to enter markets in the U.S and abroad within the next few years. Jaunt believes its ‘Journey’ aircraft will be in operation moving people and aircraft by 2026, with demonstrations beginning in 2023.

Varon Vehicles is currently developing a series of Vertiports in Latin America connected to each other via well-defined low altitude virtual lanes through which aircraft like Jaunt Air Mobility’s eVTOL will fly. Vertiports will be placed both inside and outside existing urban areas to alleviate the pressure for city growth, providing transportation services to multiple customers like logistics companies, tourism companies, hospitals, law enforcement and transportation network companies  for air taxi services, all without the need for per-mile physical construction.

Said Felipe Varon, CEO and Founder of Varon Vehicles, “The Varon Vehicles Infrastructure Network is a new form of mobility infrastructure. Technology now makes it possible to tap into unused low altitude airspace over cities and suburbs in an environmentally friendly manner to provide potentially disruptive transportation services and invaluable connectivity. We have chosen to start implementation in Colombia, where we’re working hand in hand with the Colombian civil aviation authority and a host of regional industry partners, as we bring together technologies, like Jaunt’s, for implementation.”

Over the course of 2021, Jaunt Air Mobility will work with Varon Vehicles to understand the unique transportation needs in Latin American cities and will help define the operations and integration of its Journey aircraft into service. This will kickstart the building blocks necessary for early demonstration of the Jaunt Journey aircraft and Varon Vehicles’ operational vision.

Why it’s important: Although Jaunt Air Mobility had previously partnered with Uber Elevate, it has successfully made a quick pivot to work with Varon Vehicles in Columbia and other Latin American countries. Being this fast to begin integrating its vehicles abroad will give Jaunt a great head start into entering its vehicles into operation. In turn, Varon has received a very well-established partner in Jaunt, which brings to Varon a near-certification ready aircraft that has already received major interest from eVTOL operators in the United States like Uber.