The S Eleven is a racing purpose-built vehicle designed to reach a top speed of 155mph and has room for one pilot. The flying racing car also has automatic collision avoidance systems, similar to the Alauda Airspeeder,  in order to ensure full safety during competition.

“The racing industry has enabled us to build and evolve our product faster than our competitors because we apply existing requirements and certifications to our craft beginning with our initial design phase, allowing us to overcome all regulatory hurdles before conceptual development ever began,” says MACA Chief Operating Officer Thierry de Boisvilliers. “Plus the Carcopter S Eleven will be powered by eco-friendly Hydrogen-based fuel cells, which leaves no impact on the environment while delivering greater time-in-the-sky autonomy than vehicles using electricity or fossil fuels.” What’s more, de Boisvilliers says, the company’s relationship with the world of auto racing allows MACA to test their vehicle at low altitudes at local racetracks within a closed environment, thus enabling the company to gauge, monitor and support the vehicle through every phase of product testing.

“During trial flights, MACA will place sensors all around the tests-tracks, ensuring that even unmanned sessions will prevent vehicles from hitting walls or – in the case of multiple vehicles testing simultaneously – one another,” he says.

A retired French fighter pilot, de Boisvilliers founded MACA in 2020 with former Airbus executive Michael Krollak, after three years of R&D. The concept launched as the direct result of an internal Airbus engineering competition, where the duo’s Formula One Flying Car Concept earned top honors, garnering the support of all major Airbus divisions. Now equipped with a Carcopter S Eleven prototype, MACA was able to unveil their creation to the world in Las Vegas via its one-third scale aircraft. 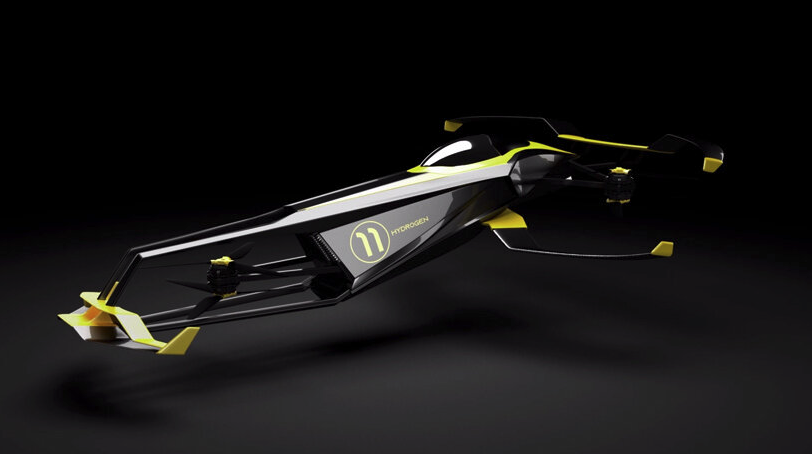 The Carcopter S Eleven’s side profile

Why it’s important: MACA’s racing Carcopter isn’t the only ‘flying race car’ concept on the horizon. Alauda and Airspeeder, for example, just established the world’s first Flying Race Car Factory, and have even already conducted the first unmanned aerial drag race with manned races planned for later this year.

Both Alauda and MACA are inspired by F1, and intend to use the momentum gained through competition to push forward the aerial mobility industry, eventually hoping to develop vehicles that could augment auto traffic to reduce its load on urban areas.

This arrival of MACA on the playing field increases competition within the aerial racing industry, which could accelerate overall interest in the niche and foster development of needed infrastructure.