Volocopter and Geely Technology Group, a global mobility technology group, presented the Volocopter 2X eVTOL for the first time in China last week at the Shanghai International Automobile Industry Exhibition 2021. According to a joint press release issued, the companies are highlighting their cooperation and their aim to introduce urban air mobility to the Chinese market, giving visitors the chance to learn more about this new form of transport.

Volocopter emphasized that in partnership with Geely Technology Group, its commercial on-demand aerial mobility services will soon be introduced in China. The company also shared that their current work is developing a scalable model for production and operations. 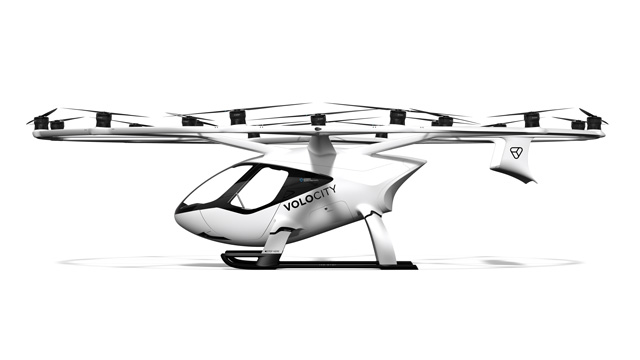 The Volocopter Volocity, which will be Volocopter’s featured aircraft for air taxi use.

“Geely’s market leadership in China and forward-thinking approach to expanding mobility options make them a great strategic investor. They are an invaluable partner for bringing urban air mobility to China – one of the most promising markets for the UAM industry globally,” says Florian Reuter, CEO Volocopter.

Volocopter and Geely Technology Group have agreed to enter a joint venture to make UAM services in China a reality and have already applied for a business license. Both companies understand that public awareness in China is one of the key factors to successfully introduce this new mobility concept, which is why they chose to present the Volocopter prototype at the Auto Shanghai 2021.

Volocopter touts their 2X aircraft for its safety and low noise emission levels. Flying at a height of 100m, the sound level of the 2X is imperceptible over normal public street noise levels.

Volocopter is no stranger to operations in Asia. In 2019, the Volocopter 2X flew over Singapore’s Marina Bay to display the possibilities of ATM (air traffic management) and UTM (unmanned traffic management) integration and infrastructure. The current two seat 2X model would be the introductory aircraft utilized in China, but for future services, Volocopter will be using their fifth-generation aircraft, the VoloCity, which is currently in the certification process with European Aviation Safety Agency (EASA). The VoloCity will have an increased speed of 110 km/h and an increased flight duration of 35 minutes.

Why it’s important: Volocopter’s partnership with Geely represents a major step toward Volocopter’s future operations in China. Geely Technology Group, a subsidiary of major Chinese company Geely Automotive Holdings, has even already entered into the growing field of aerial mobility by fully acquiring other mobility companies such as Terrafugia. Track the progress of Volocopter’s certification in China with the CAAC, or whether EASA and the CAAC reach an agreement for joint certification credit, as key indicators of future performance for Volocopter in China.