Blade Air Mobility, Inc. (“Blade”, NASDAQ: BLDE) and Eve Urban Air Mobility Solutions, Inc. (“Eve”), a subsidiary of Embraer S.A. (“Embraer,” NYSE: ERJ), have announced an arrangement for Eve to provide Blade up to 60,000 hours of flight time per year on its EVA (electric vertical aircraft) beginning in 2026 for use in Southern Florida and West Coast markets. 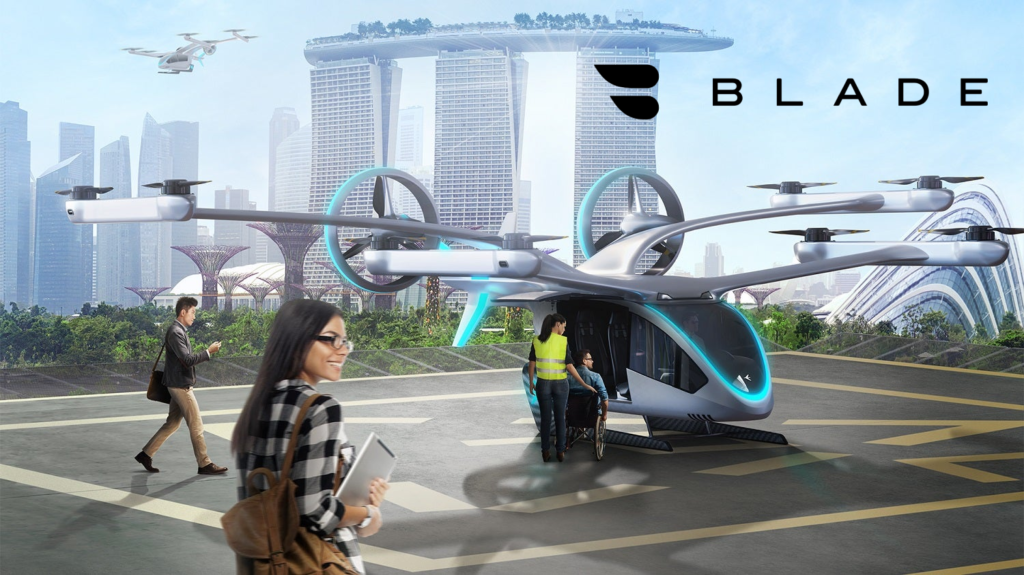 This marks Eve’s second partnership with an aerial mobility operator, having recently partnered with Ascent Urban Air Mobility for markets in the Asia-Pacific region. The aircraft’s design is impressive, with 8 vertical lift propellers, 2 pusher propellers, and room for 4 passengers plus a pilot. Dedicated thought was given to the aircraft’s aerodynamic design and cabin, giving it a fixed wing to increase range in forward flight, and an accessible and spacious cabin for passengers.

As an organization, Eve offers both its aircraft,and its Urban Air Traffic Management system, which recently reached a new milestone in its collaboration with the United Kingdom’s Civil Aviation Authority to develop a scalable environment needed to host UAM flights.

Eve plans to deploy, together with local partners, up to 60 aircraft for Blade’s use throughout the United States beginning in 2026. Blade will pay for flight time utilized on Eve’s aircraft, which will be made available by Eve and other third-parties. The deployment of Eve aircraft across the Blade network is subject to the parties entering into definitive final agreements.

Said  Andre Stein, President & CEO of Eve: “Blade is aligned with our mission as they have created a platform that provides the user seamless access to Urban Air Mobility, and now with Eve to provide an experience that is quiet and without emissions. The company’s platform will be instrumental in deploying our aircraft in key markets in South Florida and the West Coast of the United States. This partnership with Blade is the next step in unlocking the future of mobility in these key areas and marks an exciting time for both companies.”

Why it’s important: The partnership with Eve represents BLADE’s third agreement with an eVTOL development and manufacturing partner, and its fourth with electric aircraft developers overall. Other notable partners for aircraft include Beta Technologies, MagniX, and Wisk. With this announcement, BLADE adds Embraer, an aircraft developer with over 50 years of experience, to its upcoming repertoire of aircraft providers. Through these partnerships, BLADE positions itself as a foremost service provider for the rapidly approaching electric aerial mobility market.