EmbraerX, the advanced technologies division of the Brazilian aerospace company, has recently conducted the first flight of its new eVTOL aircraft design in a simulator. The eVTOL has also undergone wind tunnel testing and flights of a downscaled model, but a release date for the design has not been announced yet.

According to Andre Stein, EmbraerX head of strategy and urban air mobility, the simulators recreated accurate flight control parameters and control laws based off of real world conditions in order to prepare for eventual type certification flight testing. EmbraerX engineers have also already been testing the design’s fifth generation fly-by-wire controls, and the aircraft will initially support piloted operations but will be able to later upgrade to autonomous flight. Stein is confident that with Embraer’s vast experience in the aerospace industry, they will quickly be able to certify a reliable and efficient aircraft design.

“One of the things we have talked about is how to leverage our know-how to develop new aircraft, and [we saw this] when we did the first flight in the E2 because we broke records in expanding the flight envelope,” he said. “A lot of [eVTOL] startups rush to fly something just to have something to show investors.”

The simulator, located at the company’s headquarters in Sao Jose dos Campos, will be qualified to test the man-machine interfaces of the eVTOL design, using both experienced and inexperienced pilots. Luiz Valentini, engineering manager, said that EmbraerX works on the assumption that the aerial mobility industry will need to rely on pilots with a large variety in background and experience, meaning that the design of a very user-friendly control interface will be crucial for the new aircraft. The simulator will also allow for the preparation for an eventual shift to fully autonomous operations, giving information on detect and avoid systems, and other capabilities necessary for autonomous flight. “We are trying to create a vehicle that we can show will have the flexibility to operate in different airspaces around the world and it gives us the confidence to be able to facilitate autonomous flight capabilities before we fly the aircraft,” says Valentini.

Details on the new aircraft are limited. EmbraerX’s eVTOL will be a four-person all electric aircraft, with eight, fixed propellers attached to two parallel wings for vertical lift, while a pair of ducted fans are attached to the rear of the aircraft for cruise flight. 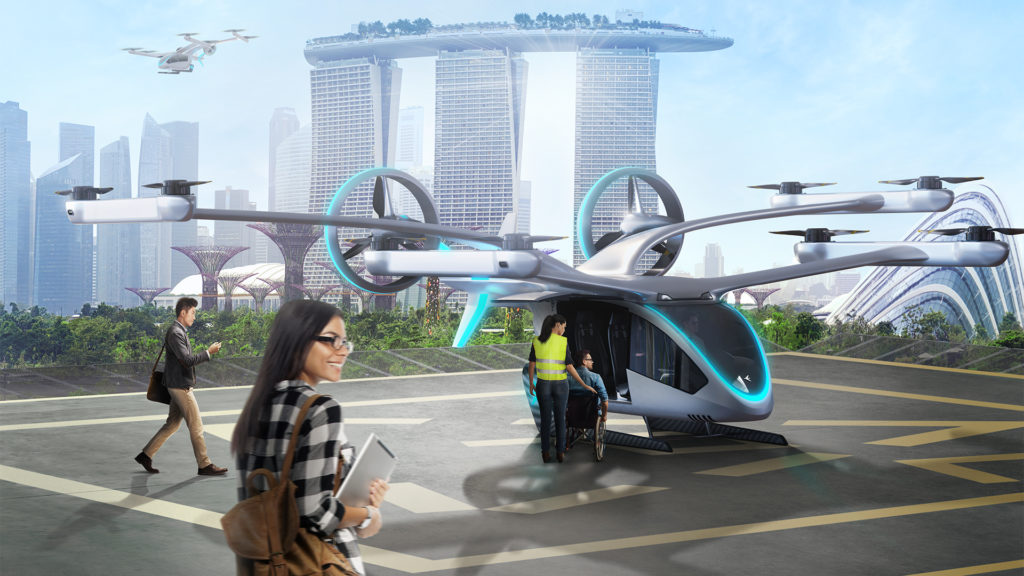 Why it’s important: With the right infrastructure in place, EmbraerX sees potential for an aerial mobility market, especially as eVTOL aircraft change the scope of air transportation in and around cities. With extensive experience spanning decades in designing and certifying aircraft, EmbraerX possesses the ability to create a working, reliable eVTOL design, and create the necessary ecosystem for such a design to fly in.
Source // AIN Online