EHang announced on April 28th hat it established a strategic partnership with the city of Zaragoza in Spain. Zaragoza was announced to be the fourth pilot city for EHang’s pilot aerial mobility program in Spain, and follows Seville and Llíria, as well as Linz in Austria.

According to the agreement, EHang and Zaragoza City will jointly promote the implementation of AAV demonstration projects in passenger transportation, aerial tourism, aerial logistics and other application scenarios under the framework of UAM strategic partnership.  They will also collaborate on UAM infrastructure development such as command-and-control center and vertiport. Both parties aim to build an aerial transportation hub in Zaragoza to advance sustainable and eco-friendly development for the city. 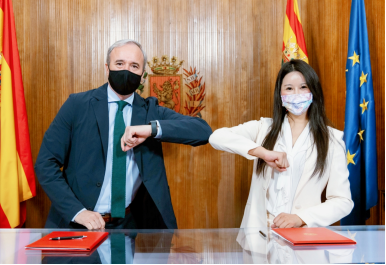 As the fifth largest city in Spain, Zaragoza has superior geographic advantages. Zaragoza actively promotes the development of urban air mobility as one of the members of UIC2 (UAM Initiative Cities Community) in Europe. In the future, with the goal to promote aerial transportation technology into the next stage of development, EHang will conduct flight tests and pilot projects at the Hera Drone Hub and along the Ebro River in Zaragoza. The partnership will also help Zaragoza to further develop UAM innovation Strategy and lead the expansion of UAM in Europe. 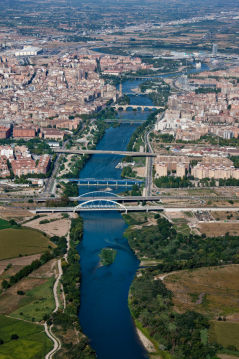 Mr. Jorge Azcón Navarro, the Mayor of Zaragoza, said, “The partnership with EHang will further drive the city of Zaragoza to become a pioneer and leader in UAM in Spain and Europe. In the future, the general public can enjoy the view of the Cathedral-Basilica of Our Lady of the Pillar, a national art treasure in Zaragoza, not only from an Ebro river boat but also from passenger-grade AAVs over the Ebro river.”

“Zaragoza is a crucial transportation hub city for Spain and for all of Europe. EHang is committed to make safe, autonomous and eco-friendly air mobility accessible to everyone. As the forerunner of cutting-edge AAV technologies and know-how, EHang will lead innovation and build a sustainable and efficient 3D air mobility solution for Zaragoza,” said Victoria Xiang, CEO of EHang Spain & Latin America. She added, “The partnership will benefit the citizens of Zaragoza by making life more enjoyable and environmentally friendly.”

Why it’s important: EHang’s growing partnerships with pilot cities across the world represent a growing network of aerial mobility hubs that will serve as springboards for future development. EHang’s novel approach of partnering directly with cities has been adopted by other aerial mobility companies as of late, and is likely to yield more grassroots support from specific municipalities when electric aerial mobility aircraft commence operations.