EHang, a long time leader in aerial mobility development, has now added another vehicle to its line-up: The VT-30 AAV, which, unlike EHang’s existing EHang 216, features a fixed-wing for longer distance inter-city travel. 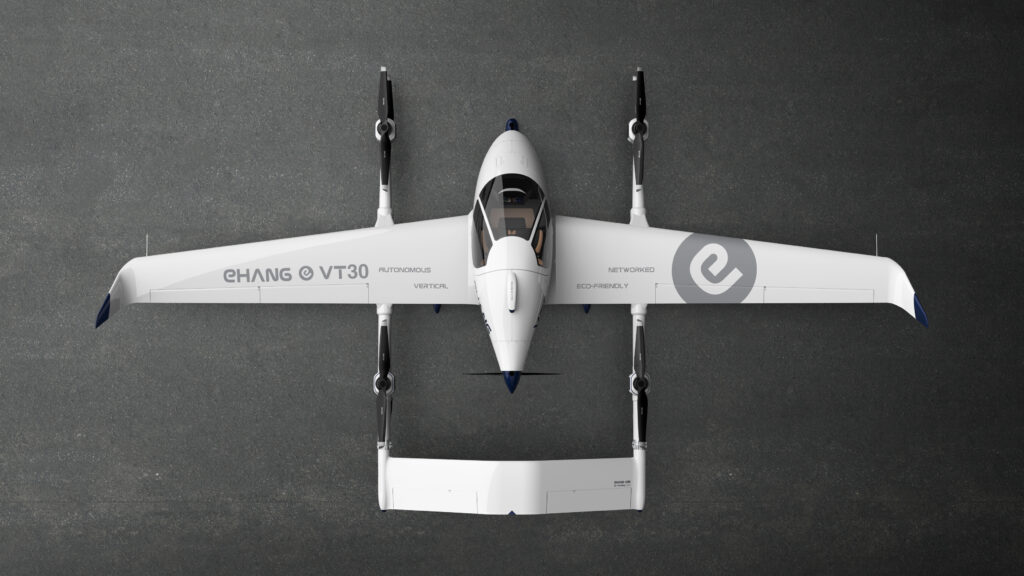 With a hybrid structure, VT-30 is designed to travel a distance of up to 300km with a designed flight time of up to 100 minutes and is designed as a safe, convenient, efficient, eco-friendly and intelligent air mobility solution for inter-city travel. As EHang’s long-range flagship product, VT-30 will complement EH216, a product focusing on intra-city air mobility, to further expand EHang’s air transportation network and expland its overall future urban air mobility (UAM) ecosystem.

VT-30 has a streamlined fuselage with a combined lifting rudder surface at the tail. Equipped with eight propellers on each side, it has a pair of fixed wings, and a propelling propeller at the rear, which are designed to achieve a maximum balance of hybrid lift and push. The distinctive design enables VT-30 to enjoy the advantage of both vertical and taxi take-off / landing modes, while satisfying the need for longer distance and flight time. Using these modes, it can either minimize or completely eliminate runway needs for take-off and landing versus traditional fixed-wing aircraft. Moreover, the tri-redundancy fly-by-wire control system can be flexibly altered into multiple modes, implying a much higher safety level for the aircraft. 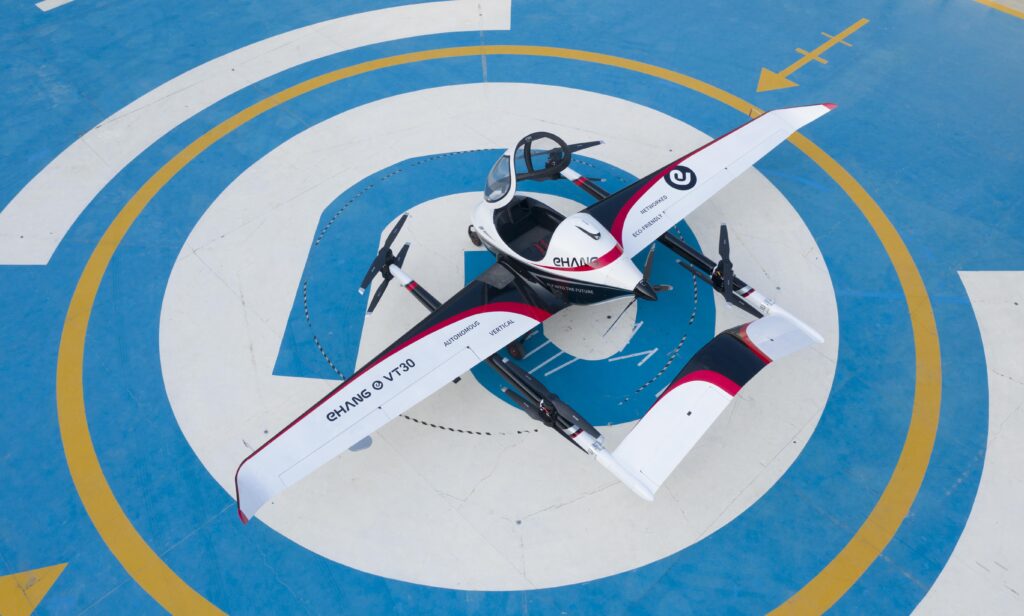 The VT-30 Prototype on an EHang take-off/landing pad

VT-30 is geared towards inter-city travel between city clusters (such as the Guangdong-Hong Kong-Macao Greater Bay Area, Yangtze River Delta, Bohai Rim, etc.), as it is able to carry two passengers from one city to another. VT-30 boasts the merits of eco-friendliness, zero emissions, and low noise, fully aligned with EHang’s principle of green travel. Compared with conventional inter-city transportation modes, VT-30 is expected to provide more efficient, environmentally friendly and low-cost solutions to urban dwellers as well as expanding the capacity of existing UAM services.

So far, VT-30 has conducted vertical take-off and landing, power system and other tests. Moving forward, EHang will continue to conduct various tests and optimizations under different environment conditions, while continuously improving AAV safety and stability, with the goal of accelerating long-distance AAVs to be used in various scenarios such as air commuting, aerial sightseeing, and aerial logistics.

“Our passenger-grade AAV EH216 is already fully equipped to travel in the cities with its lightweighted and streamlined structure, and the launch of the VT-30 provides a powerful complement to the inter-city air traffic network by meeting needs for covering longer distance,” said Mr. Huazhi Hu, Founder, Chairman and CEO of EHang, “Moving forward, these two product series will be used as core development for a service-oriented operations strategy to improve the safety, duration and capacity for carrying both passengers and goods. We will work continuously to obtain regulatory certification for our various AAV products, including the VT-30, and provide a more convenient and efficient public urban air mobility operational services.” 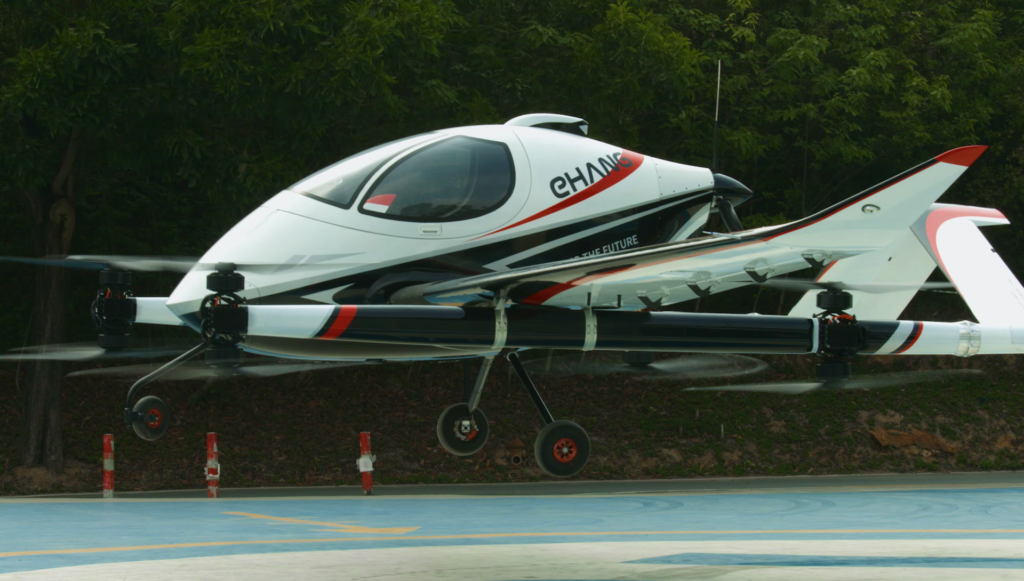 Why it’s important: With this latest product launch, EHang joins the ranks of of aerial mobility companies that are offering longer range, intercity aircraft. Prior to this release, EHang had been leading the market for non-winged AAV’s (autonomous aerial vehicles), having already launched in several cities around the globe with the EH216, and with this new aircraft in combination with its proven technology, EHang becomes an even greater key presence on the global market.

Also notably, EHang has chosen an increasingly popular ‘Lift and Push’ design, which features lifting propellers on struts along the aircraft’s sides. Other increasingly successful companies featuring this design include the recently released VoloConnect, Wisk’s Cora, and the Beta Technologies Alia. Significantly successful aircraft featuring tilt-rotors, another prominent design, are the Joby Aviation eVTOL, and the Vertical Aerospace VA-1X.