EHang is one step closer to realizing its aerial mobility vision

EHang today announced its strategic partnership with property developer Heli Chuangxin Real Estate Co. Ltd. to build out an urban air mobility (UAM) demonstration project in Guangzhou. This is a major milestone as EHang prepares for the launch of commercial operations of its much-anticipated autonomous flying taxis.

Under the terms of the partnership agreement, Heli Chuangxin and EHang are committed to building up the infrastructure for the world’s first commercial in-city sightseeing UAM route in Guangzhou. 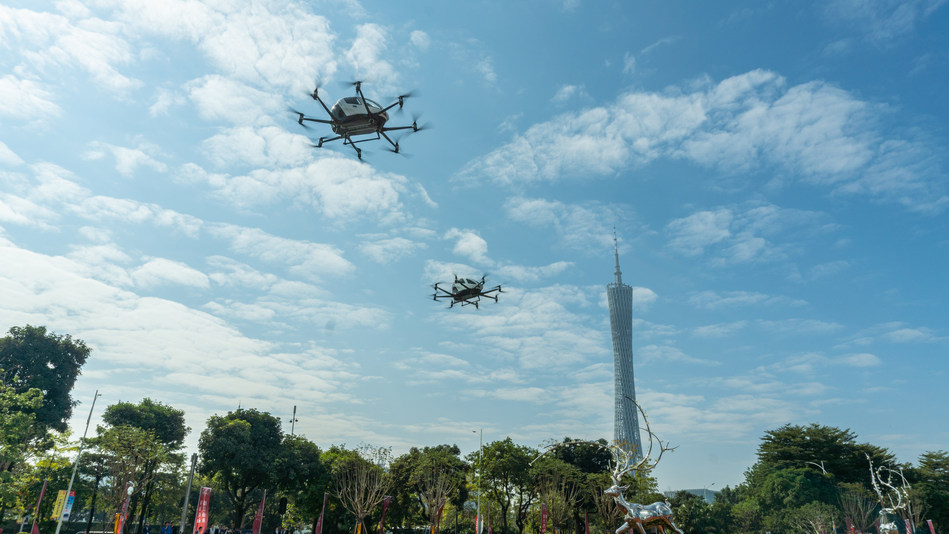 2 EHang passenger-grade AAVs performed simultaneous flight in the downtown area and CBD of Guangzhou city, near the landmark of Canton Tower and LIEDE Bridge where are must-see sightseeing place for all tourists in Guangzhou.

On November 30, two passenger-grade AAVs of the two-seater EHang 216 model performed simultaneous flight demos, vertically taking off from and landing at Heli Tiande Centre in Guangzhou on the Centre’s opening day. Six EHang 216 AAVs were also on display.

“Today’s demo flights mark another key step forward in Guangzhou’s journey to making urban air mobility a reality and lead global efforts in such commercial operations,” said Hu Huazhi, EHang’s founder, chairman, and CEO. “We are thrilled to be working together with our partners to enable safe, autonomous, and eco-friendly urban air travel as soon as possible.”

The November 30 demos took place four months after EHang announced that it had selected Guangzhou as its first UAM pilot city globally. EHang and Guangzhou plan to establish a low-altitude air transportation network that shuttles passengers and cargo in a safe, fast, environmentally friendly, and cost-efficient manner.

The pilot program enables EHang to test more flight routes and vertiports before moving into passenger-grade commercial operations. Last year, EHang already started commercial operations of air cargo transportation in and near its home base in Guangzhou, working with the express delivery company DHL-Sinotrans and retail company Yonghui.

In January 2019, EHang was selected by the Civil Aviation Administration of China as the country’s first and only pilot company for passenger-grade AAV programs. To date, EHang has safely conducted over two thousand test flights both inside and outside of China to ensure that its AAVs operate safely and reliably.

Why it matters: This milestone partnership for EHang and Heli Chuangxin Real Estate Co. Ltd. represents the progress made by the aerial mobility manufacturer. EHang appears to be on a strong growth trajectory as the company has made strides to build up its pilot program and autonomous route network in its first target city, Guangzhou. Further, the company has begun the process of filing for its IPO in the United States. Expect to see EHang making waves in the aerial mobility space in the coming weeks and months as they prepare to begin commercial operations.