Boston based Cleo Robotics was founded by Omar Eleryan to solve the problem of safely conducting inspections in tight confines within harsh environments such as the oil and gas industry, defense surveys, industrial applications, and first responder scenarios. The benefits of the solution to this problem may have much farther reaching benefits than the market that is now served. 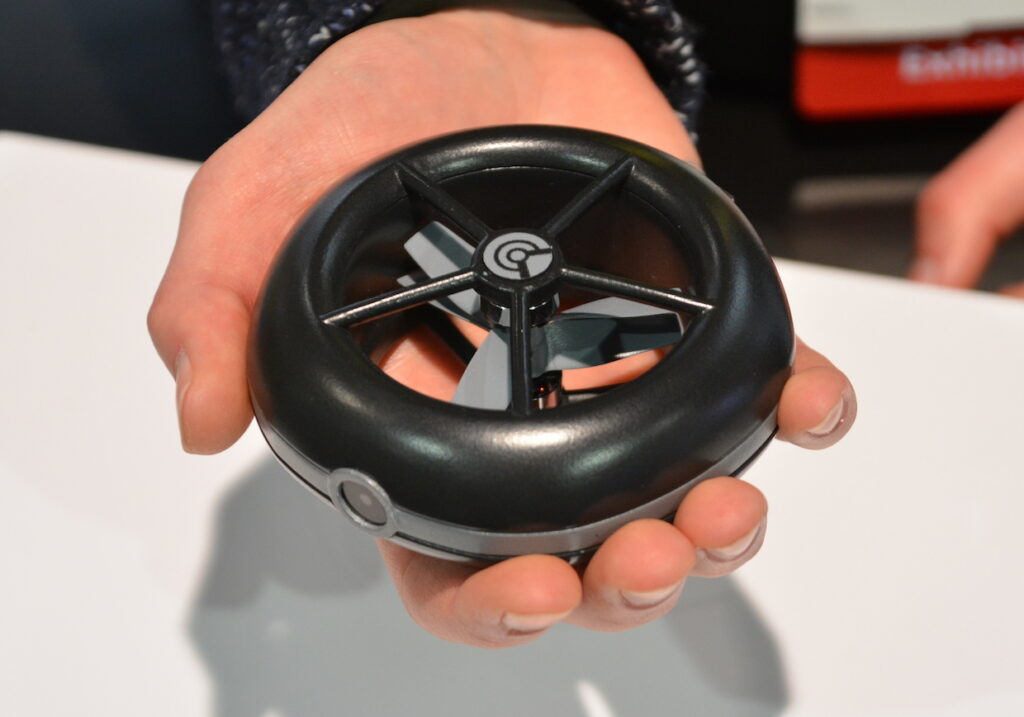 As a Mechanical Engineer who worked in the oil and gas industry, Eleryan realized that his passion for flying drones and being involved in aviation might apply directly to the problem that he faced conducting work on a daily basis. This was the genesis of Cleo Robotics, and what is now called the Dronut. The Dronut is a 6″ diameter spherical electric ducted fan drone, scaled up from the original 3″ diameter model. What’s even more impressive than the small scale of Dronut is the amount of technology that Eleryan and his team have packed into such a small vehicle.

The Dronut uses a combination of accelerometers, gyroscopes, and cameras to deflect thrust vectoring surfaces below the ducted fan that guide the Dronut through tight areas to capture imagery of the inside of chemical tanks, or a hostile building. After the imagery is obtained the Dronut returns back to the pre-programmed home base. Dronut features intelligent flight path guidance, meaning that operators can program a pre-defined imaging path which Dronut will follow, in addition to detecting and avoiding obstacles that may conflict with the proposed flight plan. This full technology suite contained within the small drone contains three kew features that could be applied to aerial mobility applications:

Additionally, Dronut’s cameras that provide the imagery capabilities required for conducting inspections could be used for tertiary purposes as well, including concurrent aerial imagery during commercial aerial mobility flights, or traffic monitoring and data sharing with other aircraft operating in nearby airspace. These capabilities have been recognized already, as the company received the AUVSI XCELLENCE Award and the New England Innovation Award for Robotics, both in 2020.

Why it’s important: Cleo Robotics has developed an integrated software and hardware package, one that’s particularly powerful since the required volume is small and the weight is low. These are key factors for effective aerial mobility aircraft that will require larger useful loads in order to carry fare paying passengers, medical transports, or other goods. While the company is currently focused on commercial applications of the Dronut, the intellectual property of the integrated autonomy package that Cleo has developed might possibly have an even larger value to future customers than the current hardware solution. In the meantime, however, there will likely be no shortage of demand for the current Dronut system, with strong interest from a number of commercial customers.