The Bell Autonomous Pod Transport (APT) took off from the AllianceTexas Mobility Innovation Zone, and delivered a package to Pecan Square in Hillwood Communities’ tech-forward, master-planned community in Northlake, Texas.

Bell has recently made a massive name for itself in the aerial mobility industry by creating UAS systems like the ATP, unveiling multiple versions of its Nexus passenger aircraft at Vegas’s Consumer Electronics Show, and even beginning to design smart cities that support aerial mobility. Through these actions and more, Bell has begun to make itself a leading American name in aerial mobility advancement.

Hillwood, meanwhile, has also participated with companies like Uber Elevate in the past to design infrastructure for urban aerial mobility transportation. Said Ross Perot jr, chairman of Hillwood, “Together, we are carving a path forward for future commercial operations to solve the supply chain challenges our world currently faces.”

The APT initiated a vertical takeoff from the Mobility Innovation Zone, and then rotated to fly on its wing, becoming nearly silent to the ground below. The aircraft reached a maximum altitude of 300 feet above ground level, and flew a total of four total miles. Its route included flying near I-35W and unpopulated fields, transitioning in and out complex airspace in order to demonstrate the multiple types of airspace the APT could encounter during a commercial flight.

Said Mitch Synder, President and CEO and Bell, “This demonstration showcases the future application of the APT 70 as a logistics carrier. Testing at the MIZ showcases how Bell’s autonomous vehicles could seamlessly integrate into logistics operations, and unlock new opportunities for businesses.” 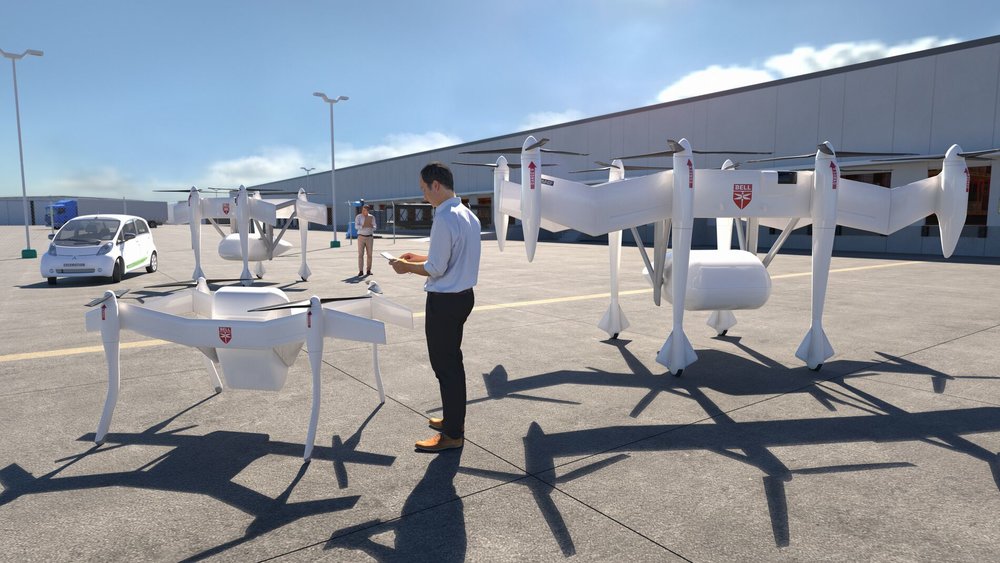 Multiple versions of Bell’s ATP system on the ground.

Why it’s important: Autonomous cargo transportation will almost certainly be the main way to lay the groundwork for the passenger-carrying aerial vehicles of the future. By setting out to begin these logistics services now, as well as simultaneously designing passenger vehicles like the Bell Nexus, Bell is creating a path for itself to bring aerial mobility networks to cities across the United States. Vehicles like Bell’s ATP will help Bell in building community acceptance, creating air mobility infrastructure, and testing flight technologies early on.