ALI Technologies showed off their prototype, Xturismo, at the 2019 Tokyo Motor Show

While ALI Technologies is still in the process of developing its final product, they presented their prototype, the Xturismo Limited Edition, at the 2019 Tokyo Motor Show at Tokyo Big Sight. ALI plans to have the final product ready for delivery by late 2020, and gain licensing for public roads under Japan’s Road Transport Vehicle Act by 2023. Mass production is also scheduled once the vehicle gains licensing provisions. 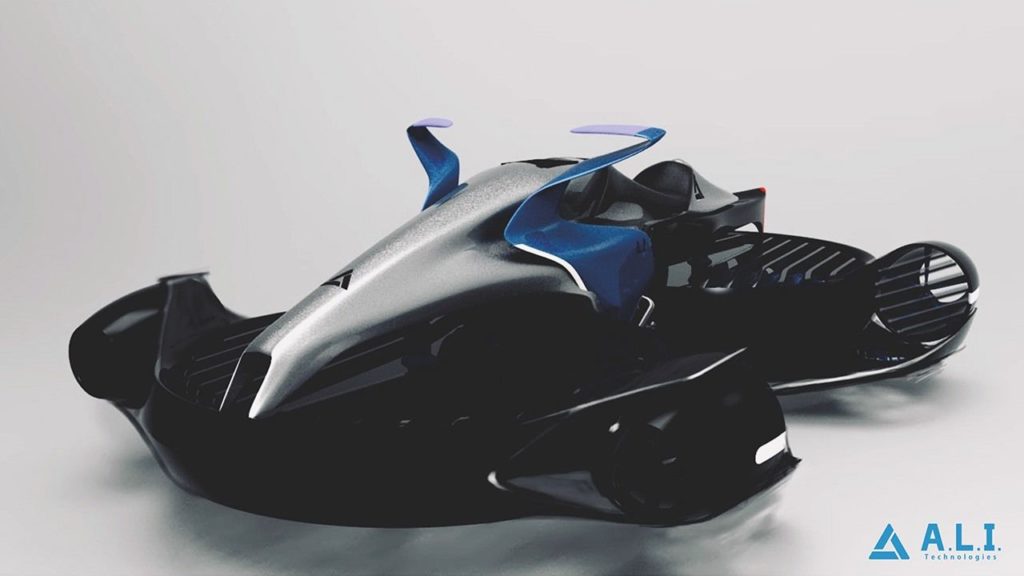 The futuristic looking vehicle runs on two fans, aligned on the front and back of its underside. Additionally, four sub-fans are installed on each quadrant section of the vehicle for steering purposes, and small, motor-driven propellers are placed on either side of the vehicle to maintain posture control. A hybrid, the vehicle is driven by both a gasoline engine and electric battery; according to ALI, while a completely electric vehicle is the plan for mass production in 2023, the gasoline engine is installed for now to ensure sufficient and sustained driving power even with small propellers. A cowl on the front and an exhaust duct at the rear help to further maximize lift. ALI Technologies did not elaborate on the vehicle’s capabilities or specifications at this stage of its development. “As for speed, all I can say right now is that we are aiming to produce a 200-kilometer-per-hour model.”, says Katano Daisuke, president of ALI Technologies. 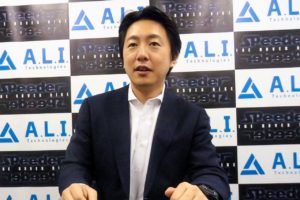 Conceptually, the vehicle is a “fusion of compact size and design,” according to Katano. Katano emphasizes the importance placed on design, and compares ALI to Tesla Motors, in that “we plan to start by marketing exclusive, high-end models, and after we’ve established our market, we’ll shift to mass production.” An important parallel would be the importance placed on the usage of clean energy in their vehicles; while Katano did not elaborate on the final product’s intended battery capabilities, at the moment ALI Technologies is aiming for two hours of driving time with one full charge of the batteries.

In concert with finishing the development of its aerial mobility technology, ALI is also working to build infrastructure for airborne traffic, including three-dimensional control systems and air route designs, ultimately aiming for “an air mobility society in which traffic accidents never happen,” according to Katano. The focus is especially strong on cutting down on traffic accidents by developing self-driving electric vehicles with a high degree of control.

“Self-driving vehicle mobility is easier to achieve in a three-dimensional rather than a two-dimensional context. The lack of obstacles make it easier to control the vehicle.” says Katano, “Our mission is to eliminate traffic accidents altogether.”

Like with many other eVTOLs and flying vehicles, ALI Technologies’ flying motorcycle will need to face numerous safety and legal hurdles to overcome, as well as a need for public acceptance. ALI Technologies has appointed Yasutomi Masafumi, a former vice transport minister, as its special advisor and is hoping to secure licenses for its airborne vehicles to be used on public roads by 2023. Until then, the vehicles will only be usable in areas such as: open fields, lakes, deserts, and wetlands, or even areas where unexploded ordnance is present. Uses that will benefit society, such as disaster relief,  will take precedent over personal applications.

ALI Technologies, headquartered in Minato, Tokyo, was established in September 2016 by a group of University of Tokyo student entrepreneurs developing drones. Chief among the group is Komatsu Shūhei, who developed the basis of a business plan for a flying bike and is the former company president and current chairman, and Katano Daisuke,who took over as president in July 2018. Komatsu and Katano work in tandem in guiding the firm, with Komatsu overseeing technology development and Katano taking responsibility for overall management of the company.

“It’s a rare company that tackles both air infrastructure and air mobility,” says Katano, “I think there’s only one other company like ours, and it’s in Israel. Our company is working to achieve an air mobility society in which traffic accidents never happen.”

Why it’s important: It’s evident that aerial mobility can be realized in numerous forms other than the “flying car.” While similarities can be drawn with the flying motorcycle in development by JetPack Aviation, the main factor to look out for will be the difference in intended applications. ALI Technologies is ultimately aiming for “an air mobility society in which traffic accidents never happen,” while JetPack’s Speeder seems to be designed for purely recreational purposes. The paths of these two companies will be interesting to follow in light of the numerous more “traditional” aerial mobility companies.