Urban Air Mobility – How big is it, really?

The initial hype about the size of the future Urban Air Mobility market, that reached its peak with the Morgan Stanley’s prediction of a $1.5 trillion potential by 2040, is now fading.

Current forecasts about Urban Air Mobility (UAM) tend to indicate a market volume which can only be possible if flying-cars fill-up the city-skies, landing or taking-off at every corner, operating very close to the pedestrians.

Whereas, the technical experts suggest something akin to today’s heliport based operations, only a bit busier. The experts have a reason for that. The regulatory uncertainties in air traffic management and a “to be defined” certification framework, combined with environmental concerns like noise and green-house-gas emissions, together with existing technical challenges regarding electric propulsion and autonomous flight, force them to limit their imaginations and try to define an implementable concept.

This is both good and bad!

The good part is that it is much easier to implement.

The concepts that the experts mostly promote avoid the regulatory swamps by reducing the routes over city centers, and empowering to fly VFR [1]while concentrating the operations to specific landing spots properly regulated and protected. They plan to increase the number of heliports and propose to start by employing hybrid aircraft until full electric propulsion becomes technically feasible.

This is very logical. But there is a catch over there. They promote exactly what the current helicopter air-taxi services are doing today, albeit with a smaller market share. But flying exotic electric air vehicles instead of helicopters is not Urban Air Mobility. Such an initial move of mimicking the existing practices will not morph into the trillion dollar future that the UAM investors dream of.

Well, maybe it will, but definitely not in the time frame that they hope for…

Porsche Consulting’s 2018 report titled “The Future of Vertical Mobility”, takes Sao Paulo as an example and suggests a “vertiport (heliport) infrastructure build-up” to achieve “sufficient coverage” of the city. This, the report says, will require some 100 vertiports with around 1000 air-taxis in operation. 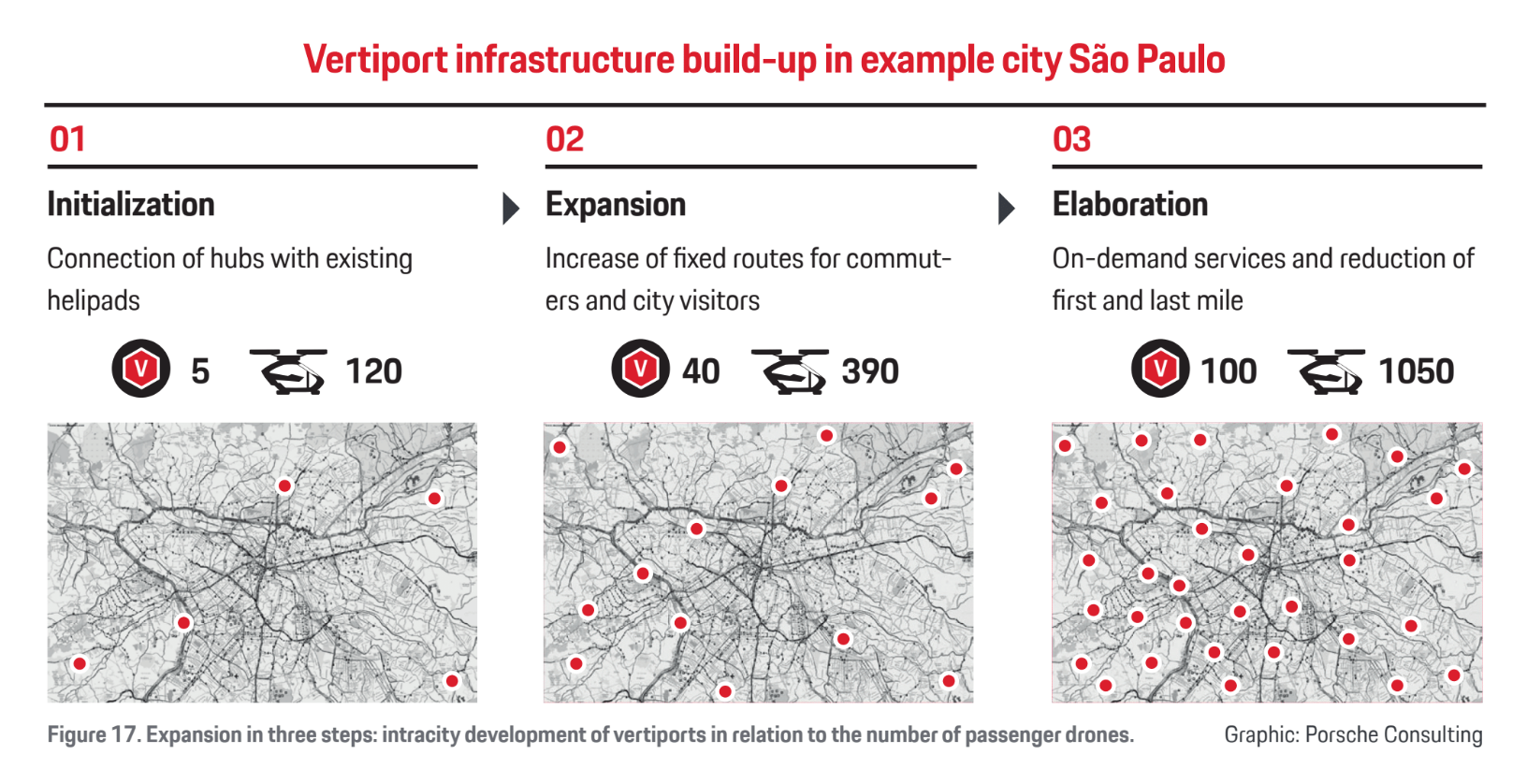 But in real life, one should expect that the demand will not be evenly distributed among all vertiports. And the Pareto Principle suggests that 20 percent of vertiports should assume 80 percent of the traffic. This will mean that during the “elaboration phase” (refer to figure above) some 20 vertiports in Sao Paulo may have a continuous demand of over 40 air-taxis, each. This situation will either lead to ridiculous waiting times (either on the ground or in the air) or will force the vertiports to expand and become medium size airports, both of which will highly impede the versatility of the UAM concept.

A more likely scenario is that the expansion will got chocked before fully evolving into the “elaboration phase”. According to Porsche Consulting’s figure above, at the “choking point” there will be almost 400 air-taxis in operation in Sao Paulo. Even if we assume the existing 400 registered helicopters to be still in operation at that time (the report assumes 130), this would indicate a doubling of the market, and no more…

By the way, I find Uber’s plans of “1,000-plus takeoffs per hour at each vertiport” [2] rather ambitious.

It is, of course, critical to evaluate UAM for specific use cases (e.g. Air Taxi, Air Metro, Last-mile Delivery…) to produce meaningful results. Air-metro, which practically is the “ride-sharing” version of air-taxi concept, is more likely to flourish first. Very probably the air-metro solutions will initially utilize piloted and hybrid aircraft and (by definition [3]) will operate between pre-defined locations like airports and vertiports. So that, they will be able to“avoid the regulatory swamps and reduce the routes over city centers”, while staying competitive against ground transportation solutions.

But even the “easier to certify” piloted solutions will not help to reach optimistic forecast figures. Because for a market volume approaching to trillion dollars “…there’s no way you could put a pilot in every vehicle”, as Robert Pearce from Aeronautics Research Mission Directorate of NASA had neatly put it in August 2018.

Is this the End of Story?

Absolutely not! But we need to see that even the obvious solution of operating piloted services to and from specific controlled points (i.e. vertiports) to circumvent the; regulatory, environmental and social obstacles has two major bottlenecks: 1) the number of pilots required and 2) the traffic volume that any vertiport can handle in a given time interval.

Putting it openly: The suggested market volume of trillion dollars is not realistic. Such a market volume cannot be reached through current approaches. It needs the embarking and disembarking points become highly distributed (and unregulated) and the autonomous flight be regulated.Even after then, according to Eduardo Domínguez-Puerta of Airbus, it is more or less “$50 billion accumulated market. Out of that $50 billion, less than half is going to go to the vehicles.”[4] And this is not bad at all! Please note that the current Civil Helicopter Market is fluctuating around just $8 billion/year [5].

Finally, I cannot not help but making a prediction: In line with the above, I expect that the first successful commercial air-metro implementation to be the Terrafugia’s TF-2 [6]. It somehow bridges the gap between the air-taxi and air-metro by a unique multi-modal solution (while keeping the unshrouded props away from the ground crew, see https://www.linkedin.com/pulse/urban-air-mobility-quest-right-shape-mehmet-emre-yazici/). And it is quite possible that we will see it operational by 2025.But for a real Urban Air Mobility we need to wait until the flying-cars (and air-taxis) become widespread, probably not earlier than the mid of the century.
// This article was originally published by Mehmet Emre YAZICI //
[1] Visual Flight Rules – not allowed for instrument flying, i.e. they need to fly in good weather only
[2] Nick Zazulia, https://www.aviationtoday.com/2019/01/24/ubers-air-taxis-will-succeed-helicopters-failed/
[3] Taxi is a vehicle that collects you from any location of your preference and transports you to any location that you dictate. Whereas, a metro collects you from a fixed predetermined location and provides you with limited possible alternative destinations for you to prefer one.
[4] Eduardo Domínguez-Puerta, Airbus, https://c-drone-review.news/en/2019/01/23/airbus-presents-air-taxi-strategy-at-aiaa-scitech-forum/
[5] Forecast International, 23 february 2018
[6] This doesn’t mean I changed my mind about Lilium’s design. I still believe it is the optimum configuration for flying-cars or air-taxi (piloted or not) services where you should be able to land and take-off from any [unregulated] location, just like today’s cars. I only think that the air-metro will precede the air-taxi.