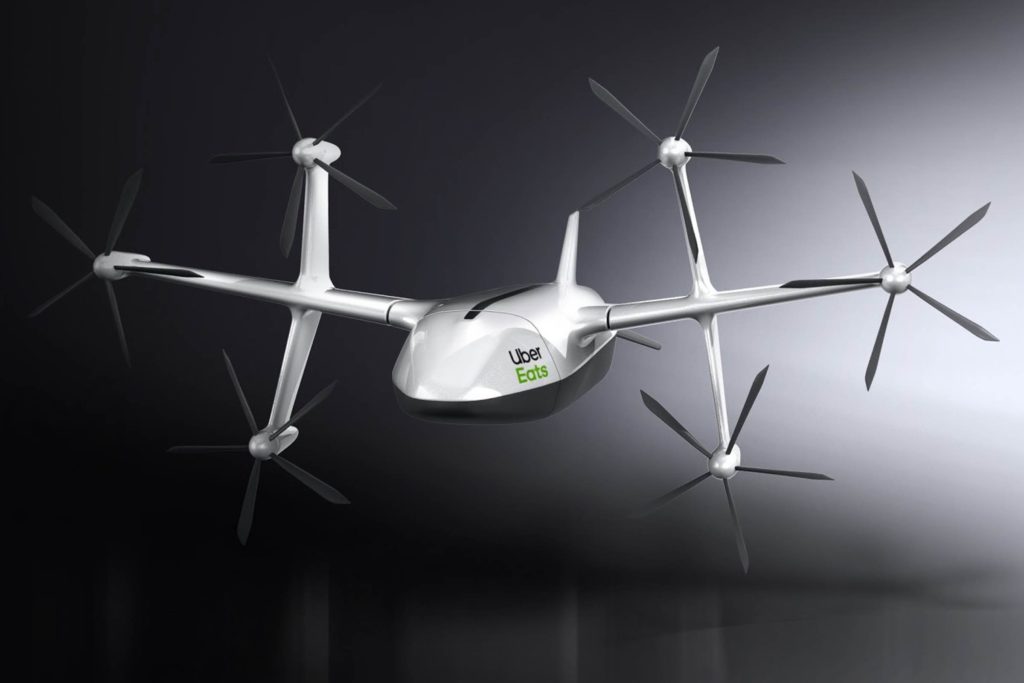 The new Uber Eats drone was designed by Uber Elevate with speed in mind. To “increase speed and efficiency”, Elevate chose to use a rotating wing design. This means that the rotors will initially point upwards on take-off, lifting the drone into the air and then tilting into the horizontal flight position seen above. The drone itself can carry enough capacity for about two meals, with a range of about 18 miles.

This new design is remarkably similar to the concept model drawn up by Uber Elevate for its future air taxis. Like the new drone, the model also utilizes the tilt-rotor design, using the same rotors for both vertical take-off and horizontal flight.

Uber Elevate’s concept design for air taxis. This design also features tilting rotors with a fixed wing for efficiency. Uber will work with partners such as Bell, EmbraerX, Boeing, and more.

Elevate plans to begin drone food deliveries in San Diego in Summer of 2020, having already applied for FAA approval to complete commercial flights there. The company already completed delivery tests in San Diego early last summer in partnership with McDonalds.

Food delivery by drone will be operated through Elevate’s ‘Cloud System’, which will eventually be responsible for managing passenger air taxis. Testing the Cloud System through drone deliveries, as well as through Uber’s new Uber Copter service, will allow Uber to begin laying the ground work for the coming future passenger aircraft.

Many other companies have initiated drone delivery efforts as well. Earlier this month, UPS became the first to receive full part 135 certification as a commercial air carrier using drones. Prior to this, Alphabet company Wing received a similar certification, although for a smaller area. Amazon too recently entered the industry with a new hexagonal drone design, hoping to even futher lower package delivery times. And just this week, aerial mobility company Volocopter unveiled a new drone designed for heavier cargo.

Why it’s important: Ultimately, beginning work on aerial mobility through food delivery by drone will help enable the future of Uber Elevate’s eVTOL air taxi vision. The important strides being taken throughout the drone delivery industry will provide important technologies and frameworks for the operation of the coming eVTOL passenger aircraft.