In a partnership with automotive manufacturer Hyundai, Uber Elevate has released an updated version of its air taxi concept, and has begun plans for large-scale manufacturing.

In a major move for both companies, Uber Elevate has partnered with Hyundai with the intention of mass-producing air taxis for its eVTOL network. Other Uber partners so far include Boeing, Bell, EmbraerX, Karem Aircraft, Pipistrel, Jaunt Air Mobility, and Joby Aviation.

Elevate has selected Hyundai for its experience in mass-producing innovative electric vehicles within the auto industry. While other aircraft partners (listed above) have provided excellent designs, none of them have produced vehicles on the same scale as Hyundai. As Uber notes within its original white paper, mass-production of eVTOL aircraft will be key in making air taxi services affordable to the general public. EEnlisting Hyundai marks the next step in that journey.

Together, Uber and Hyundai have created the next generation of Uber’s own concept model, which was originally created in collaboration with former NASA employee Mark Moore. The newest aircraft removes two lift rotors that were originally flush with the tail, and moves them to sit behind each of the front forward thrust rotors. It also adds an inverted rotor underneath each of the wing top lift rotors, giving them an extra layer of propulsion.

The newest design will follow NASA’s historical approach of publicly releasing engineering blueprints and concepts applied, in order to help all players within the industry develop more advanced aircraft. In particular, the newest aircraft focuses on the key aspects of noise reduction, wing design, and overall aerodynamics.

Under the current model unveiled at CES, the vehicle would have a cruising speed of 180mph with an electric range of 60 miles, carrying four passengers plus a pilot, and requiring only five to seven minutes to charge. 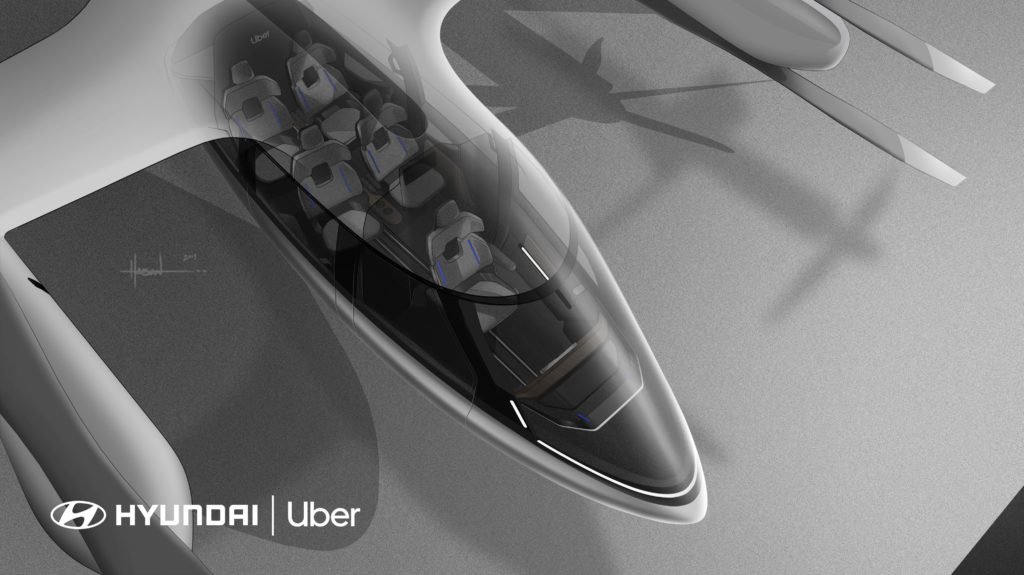 To an extent, this newest development may help answer the question of how much Uber’s partners will work together in creating their individual aircraft. Important key engineering concepts will likely be shared among partners, leveraging combined knowledge to give the industry itself an extra boost. Similarly, Hyundai is likely to share its wide-scale manufacturing capabilities with Uber’s partners, giving them extra potential.

““We expect UAM to vitalize urban communities and provide more quality time to people. We are confident that Uber Elevate is the right partner to make this innovative product readily available to as many customers as possible.”

Why it’s important: The collaboration of such massive transportation industry players as Uber and Hyundai along with the other experienced aviation industry partners will exponentially increase potential for the “vibrant air taxi network” Uber Elevate hopes to establish in the coming years. Combining Uber’s logistics and technology expertise with Hyundai’s manufacturing capabilities and other partners’ aircraft design experience could create the winning combination Uber is hoping for, making the newest partnership an excellent move for Elevate.

Read more on the progress of Uber Elevate.