Flyboard Air Soars Over Crowds at Bastille Day in France

On Bastille Day, a national holiday and pride celebration in France, inventor Franky Zapata flew over crowds on the jet-powered ‘Flyboard Air’. 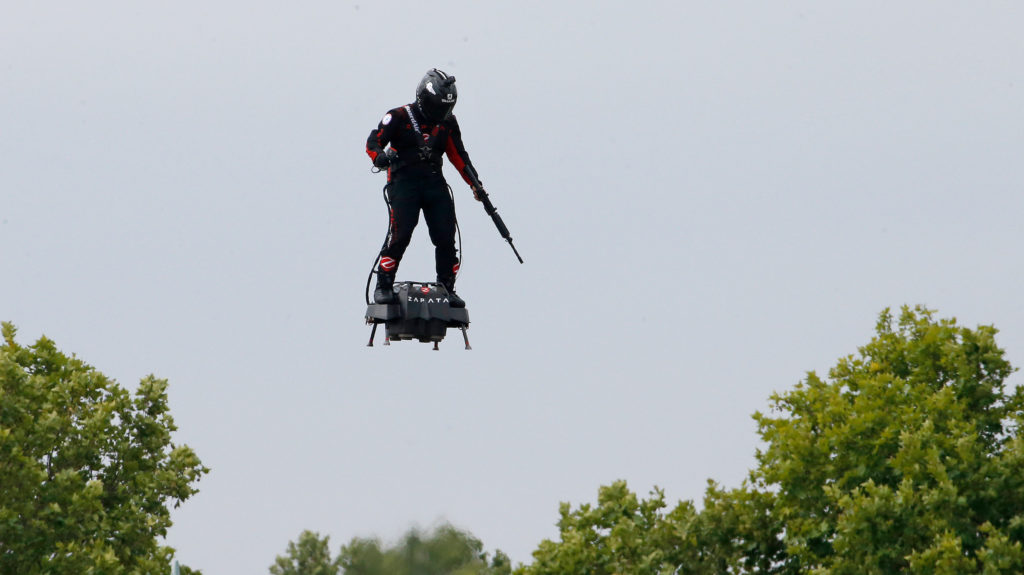 Franky Zapata, a flying enthusiast, has recently found success by starting a new business selling customizable hydro-powered flying kits for jet skis. Now, he has turned to making boards that are completely standalone, using a combination of turbines and electric engines to fly through the air at high speed.

At Bastille Day, a celebration of national pride for France, Zapata exhibited the capabilities of the Flyboard Air, posing as a ‘flying soldier’ to demonstrate the potential use for specialized military operations. While so far all of Zapata’s flying products have been recreational, the Flyboard Air offers a level of mobility which could be used for military, medical response, and industrial surveillance.

In attendance at the Bastille Day demonstration was French president Emmanuel Macron. According Armed Forces Minister Florence Parly, the French military is considering using the Flyboard for various uses, which may include assault operations. Watch the full demonstration flight in this video from a tweet by Macron:

The Flyboard Air is powered by a series of turbine jet engines, and is controlled by a combination of throttle and the human body itself. Previous challenges to designing such a compact personal aerial vehicle have included the storage of energy needed to sustain flight, the difficulty of aircraft control, and of course, safety issues. To address this, the Zapata team claims to have a redundant flight system through which the aircraft can still easily fly with only one engine, and can complete a safe auto-landing in the event of two engine losses.

According to the Zapata site, the Flyboard Air should be able to fly up to 120mph, reach heights of nearly 10,000 feet, and stay in the air for a maximum of 30 minutes.

Why it’s important: While the Flyboard Air may not be directly applicable in Urban Air Mobility in the near future, the engineering potential in its propulsion design has important implications for UAM. The Flyboard Air shows that even the lightest of aircraft can sustain powered flight, meaning a great deal for UAM engineering challenges.