Expo 2020 Dubai and Jetman Dubai have accomplished another world first in their quest to achieve 100 percent autonomous human flight: a take-off from the ground, transitioning into a high-altitude flight.

On Friday February 14th, Jetman pilot Vince Reffet successfully launched into the air from the runway of Skydive Dubai and flew up to an altitude of 1,800 meters. This milestone proved that Jetmen can now fly directly upwards from a standing start without the need for an elevated platform or helicopter drop.

For both flights, Reffet was equipped with a carbon fiber wing powered by four mini jet engines. Controlled by the human body, the equipment enables the Jetman to reach speeds of 400kmh, as well as hovering, changing direction and performing loops. A manually controlled thrust vectoring nozzle allows the pilot to control rotations around the yaw axis at zero speeds, making human control of the wing possible in all flight phases without the aid of any electronic stabilization systems. 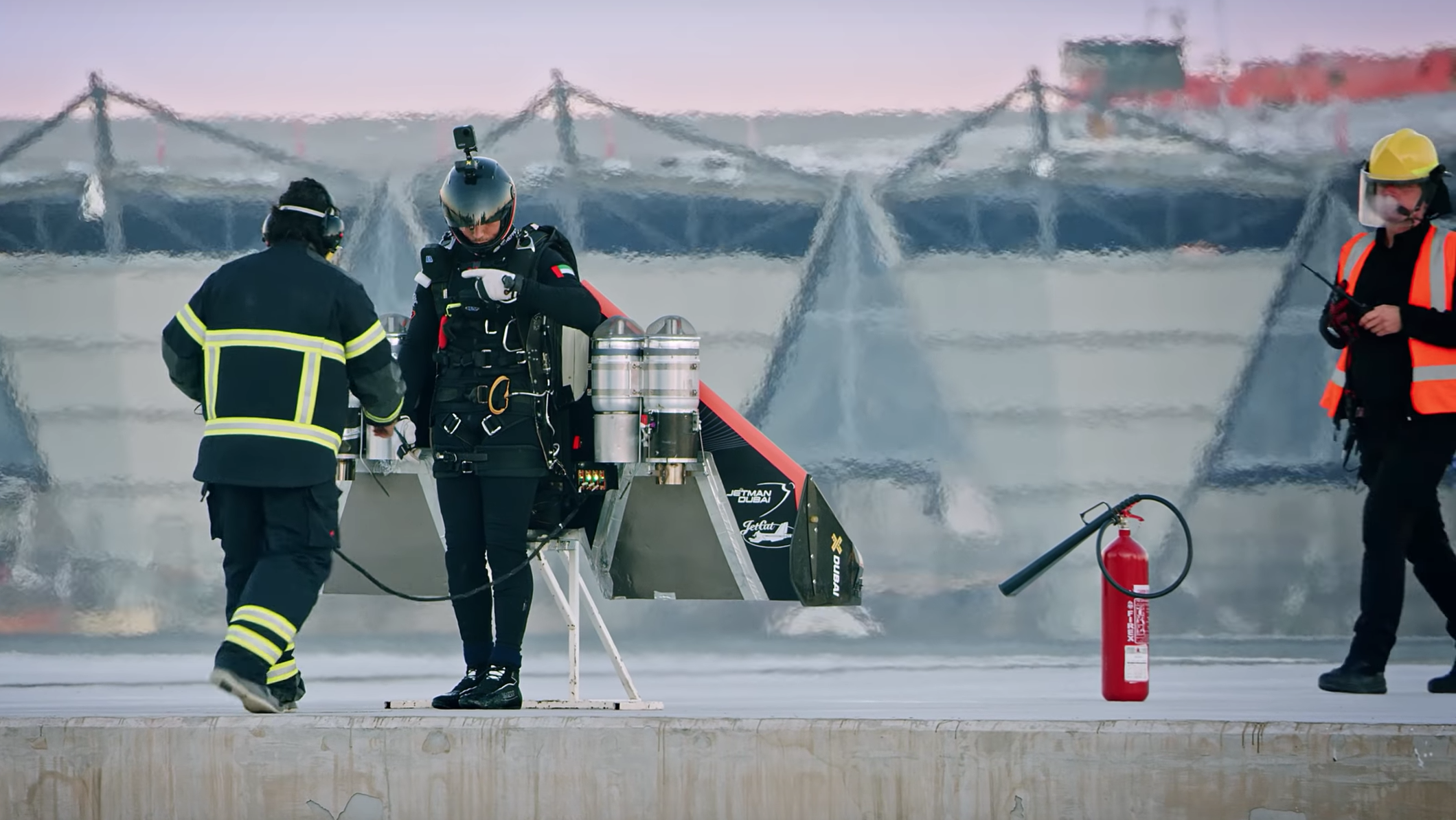 Previously, Jetmen have launched into the air by leaping downwards off elevated platforms such as a helicopter in flight. This included a jaw-dropping stunt in late 2019 – also part of Expo 2020’s Mission: Human Flight program – as Reffet and fellow Jetman Fred Fugen soared through Tianmen Cave (aka ‘Heaven’s Gate’) in China’s Hunan Province. Additionally, this is the first time that a Jetman pilot has combined hovering safely at a low altitude and flying aerobatics at a high altitude in the same flight.

Research supported by Expo 2020 Dubai has also focused on drastic risk reduction by studying speed profiles, engine parameters and flight attitudes. Should an engine failure have occurred at low altitude, Reffet was backed by a pyrotechnic safety parachute that reduces the critical phase of his flight to four seconds (when his altitude is between five and 50m). Jetman places a high priority on safety during these stunts, and claims “no fewer than 50 preparatory flights were conducted – comprising more than 100 take-offs and landings under a cable and with the safety of a fall arresting system, as well as in-flight tests next to a helicopter.” 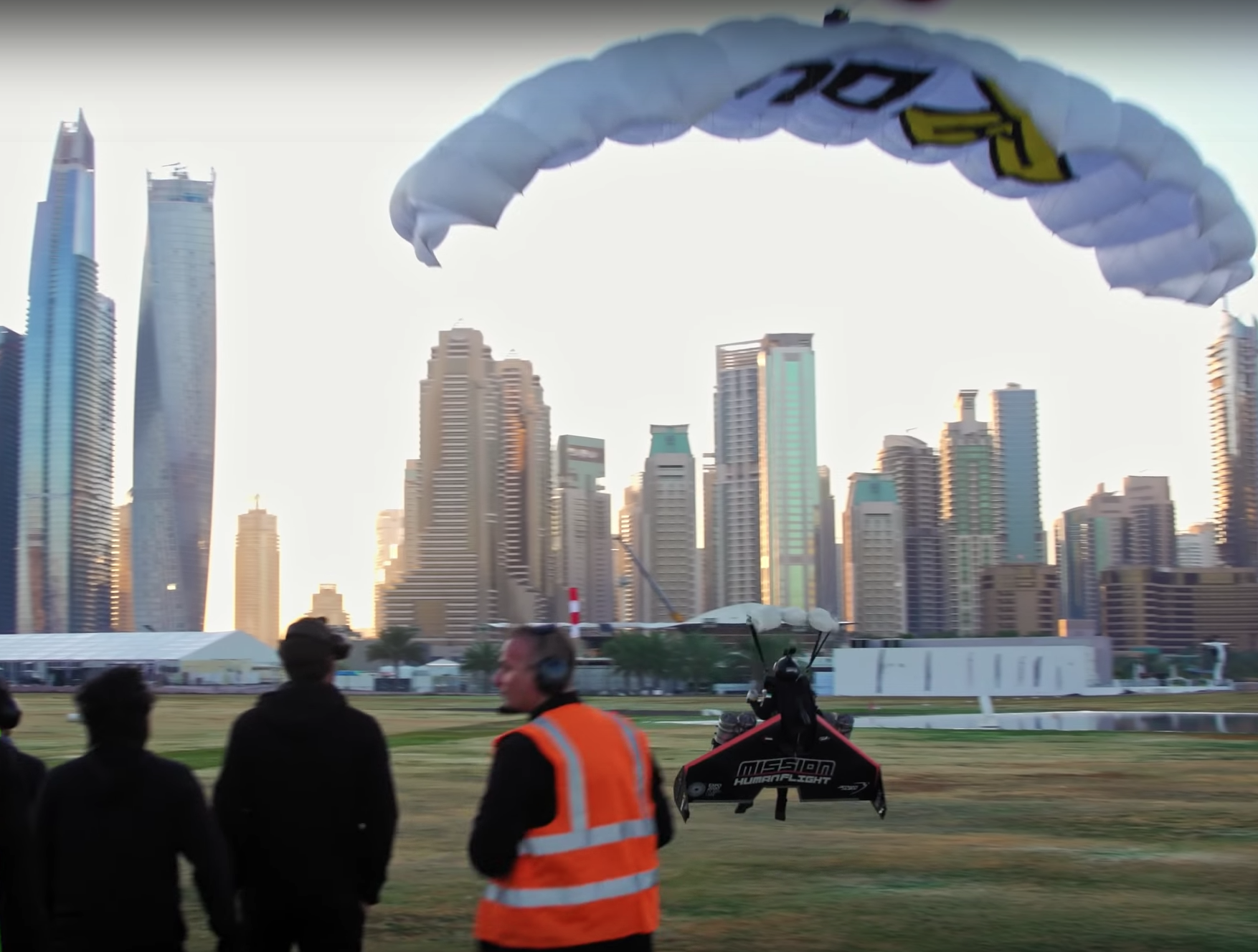 At the end of his three-minute flight, Reffet performed a roll and a loop at 1,800m altitude, before opening his parachute at 1,500m and landing back at Skydive Dubai.  Credit // Jetman

Shortly after his landing, Vince Reffet commented: “We are so happy we achieved this incredible flight. It’s the result of extremely thorough teamwork, where each small step generated huge results. Everything was planned to the split second, and I was overjoyed by the progress that was achieved. It is another step in a long-term project. One of the next objectives is to land back on the ground after a flight at altitude, without needing to open a parachute. It’s being worked on.”

Why it’s important: Jetman has achieved and impressive and eye-catching milestone, but does not plan on stopping here. Development will continue in the coming months, and Ahmed Alshehhi, the first Emirati Jetman, continues to train as the UAE prepares to welcome 192 nations and millions of global visitors for Expo 2020 Dubai (from 20 October 2020 to 10 April 2021).