In the rapidly-growing industry of urban air mobility, creativity can – and is encouraged to – manifest itself in various forms and functions of new transportation vehicles. While purely recreational for most, some regard the hoverboard as a viable mode of transportation for short-haul trips. Franky Zapata, a skilled hoverboard inventor and pilot, aims to prove that to the public. 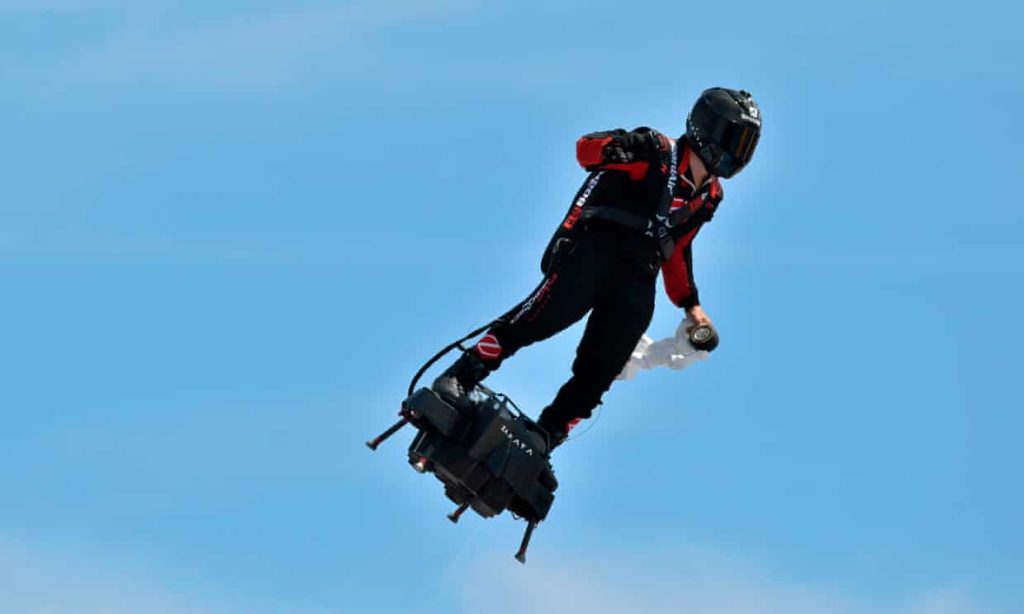 110 years ago, French inventor Louis Blériot made the world’s first crossing of the English Channel via airplane. To honor the achievement, inventor Franky Zapata (also French) recently attempted to make his own cross-Channel trip on a jet-powered flying hoverboard.

The 40-year old Frenchman took off from Sangatte at around 9 am local time (3 am EST), hoping to make the 22-mile crossing in time for the 110th anniversary of the first aerial crossing of the English Channel. He was about 11 miles out from the finish line at St. Margaret’s Bay, England when he crashed during a mid-Channel refueling attempt.

Some footage from the flight and an interview with Zapata can be seen in this video from The Guardian:

Zapata missed the refueling platform, which was mounted on a boat, while trying to pick up a second pack of kerosene fuel. Zapata was uninjured, but the flyboard was damaged in the crash. “When I got closer to the platform, the boat took a wave and it hit the foot of the machine and broke it,” Zapata said in a press conference, “The flyboard is damaged, the electronic part has to be redone, the motors are ruined but the base is saved”.

For the 21 mile trip, Zapata needed to make the refueling stop at the 11 mile mark. He had planned to hover above the support boat during refueling rather than landing so that he could claim a complete channel flight. Although the attempt was ultimately unsuccessful, Zapata previously had recognized the boldness of the venture, saying, ““It won’t be easy at all, and I reckon I’ve a 30 percent chance of succeeding.”

Zapata, a jetski champion-turned-inventor, recently showed off his newest invention at Paris’ Bastille Day. According to Zapata, that flight only used “3% of the machine’s capabilities”, while the flight across the English Channel required 99%.

Watch the video of the successful flight on Bastille Day below:

The Flyboard Air has five mini turbo engines, can run autonomously for a maximum of 10 minutes, and can reach speeds of up to 118mph (190km/h) at full capacity.

Why it’s important: The French armed forces minister has articulated a foreseen potential for both cargo and military applications of hoverboard technologies. Although the cross-channel flight was ultimately a failure, it does much to prove the potential for the Flyboard Air and helps its development process. This could lead to further funding for the project, adding to the €1.3 million grant Zapata already received from the French government in 2018.