FARNBOROUGH, England — Drones are here and flying cars are moving from sci-fi to reality — now regulators and potential customers are scrambling to catch up.

Aerospace giants like Airbus and Boeing, tech companies like Uber and even McDonald’s are betting big on drone deliveries and air taxis. They promise to shorten delivery times, ease congestion and decarbonize transport. But that technological vision is running into two problems — public skepticism and a missing regulatory framework.

“Lots of people come and say they want to launch in central London, that’s great but planning issues, privacy, power and public acceptance are more intensely felt there,” Tim Johnson, policy director at the U.K. Civil Aviation Authority, said at the Global Urban Air Summit at Farnborough on Tuesday. 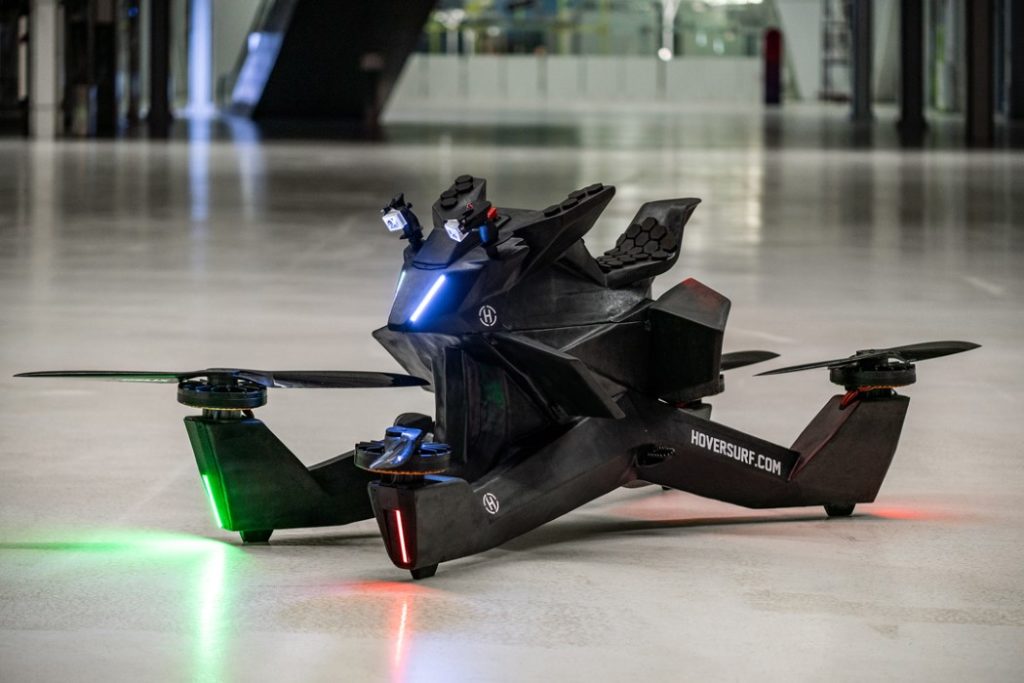 Companies like Hoversurf, creator of the S3 Hoverbike, are utilizing ultralight certification categories to circumvent the formal type certification process of the FAA. Image // Hoversurf

The challenge is that the nascent technologies span the range from what exists now — drones, for example — to those that are still on drawing boards, like various versions of flying cars. Regulators have to work out rules on everything from what is covered — the EU had a big debate on how heavy a drone has to be before tougher rules apply — to how such decisions affect shared airspace, noise levels, pollution and safety.

While Brussels is trying to establish EU-wide rules, national regulators are also drawing up regulations, and often choosing divergent approaches.

“If we think if we go in anything less than incremental steps, then we’re probably mistaken” — Jon Round, Civil Aviation Authority official

“Picking our markets have been almost exclusively driven by politics, not economics,” said Duncan Walker, co-founder and managing director of Skyports, a company that builds platforms and buildings from which aircraft can take off and land.

He said that working with regulators “frankly, is a mess.”

Walker’s words were echoed by other industry officials at the conference. Asked if U.K. authorities have implemented steps to allow the integration of unmanned aircraft into airspace, Harini Kulatunga, head of solutions for unmanned aerial systems at Airbus, said: “I don’t believe so.”

The speed of technological change throws up another issue for regulators.

An image of the new Amazon delivery drone is displayed during the Amazon Re:MARS conference in Las Vegas on June 5, 2019 | Mark Ralston/AFP via Getty Images

“It’s equally as bad to get ahead of the industry as it is to get behind them,” said Jay Merckle, executive director of the Unmanned Aircraft Systems Integration Office at the U.S. Federal Aviation Administration, citing the risk that legislating too early means doing guesswork on which way the industry will go, and often getting it wrong.

Jon Round, head of airspace, air traffic management and aerodromes at the Civil Aviation Authority, asked for patience. “If we think if we go in anything less than incremental steps, then we’re probably mistaken.”

Getting technology and regulations aligned leaves another hurdle — persuading people that these services are needed.

Convincing them to agree to more noisy objects flying above their heads is a challenge. People “don’t want noise above them unless they’re the ones going on holiday in a plane or there’s a drone delivery that’s for them,” said Round. “The noise is enormous as an issue.”

High cost also makes it difficult for companies to make the argument that ordinary people will benefit. Current helicopter services in São Paulo, Mexico City and New York — running as pilot projects for Airbus and Uber — only cater to affluent customers.

Industry emphasized the need to outline the potential value of urban air mobility — moving organs and blood across a city rather than pizza, for example.

“The real challenge of making this successful is that people don’t feel it’s only for a select few,” said James Cranswick, director of aviation at Deloitte, the consultancy.

Companies argue that urban air mobility is a possible solution to congestion, but Uber, which is also investing in air transport, said it does not envision “mass transport,” and predicts eventually moving around 10,000 people in a city per day — a far cry from the 3.5 million who use London’s public transport system every day.

Industry emphasized the need to outline the potential value of urban air mobility — moving organs and blood across a city rather than pizza, for example. The biggest challenge is “social,” said Mildred Troegeler, the director of global airspace integration at Boeing NeXt, the company’s division that deals with urban air transport. “We need to show the actual value of the operations.”

This article originally appeared on Politico.eu. Used with permission from Saim Saeed.