NASA and Booz: The Joint Projection of Urban Aviation’s Future

NASA and consulting firm Booz Allen Hamilton released a joint study on November 12 that outlined future projections of the urban aviation industry. The original executive briefing was presented on October 5th to NASA’s Aeronautics Research Directorate. Before we go into the details of the study, here are some of the key takeaways: 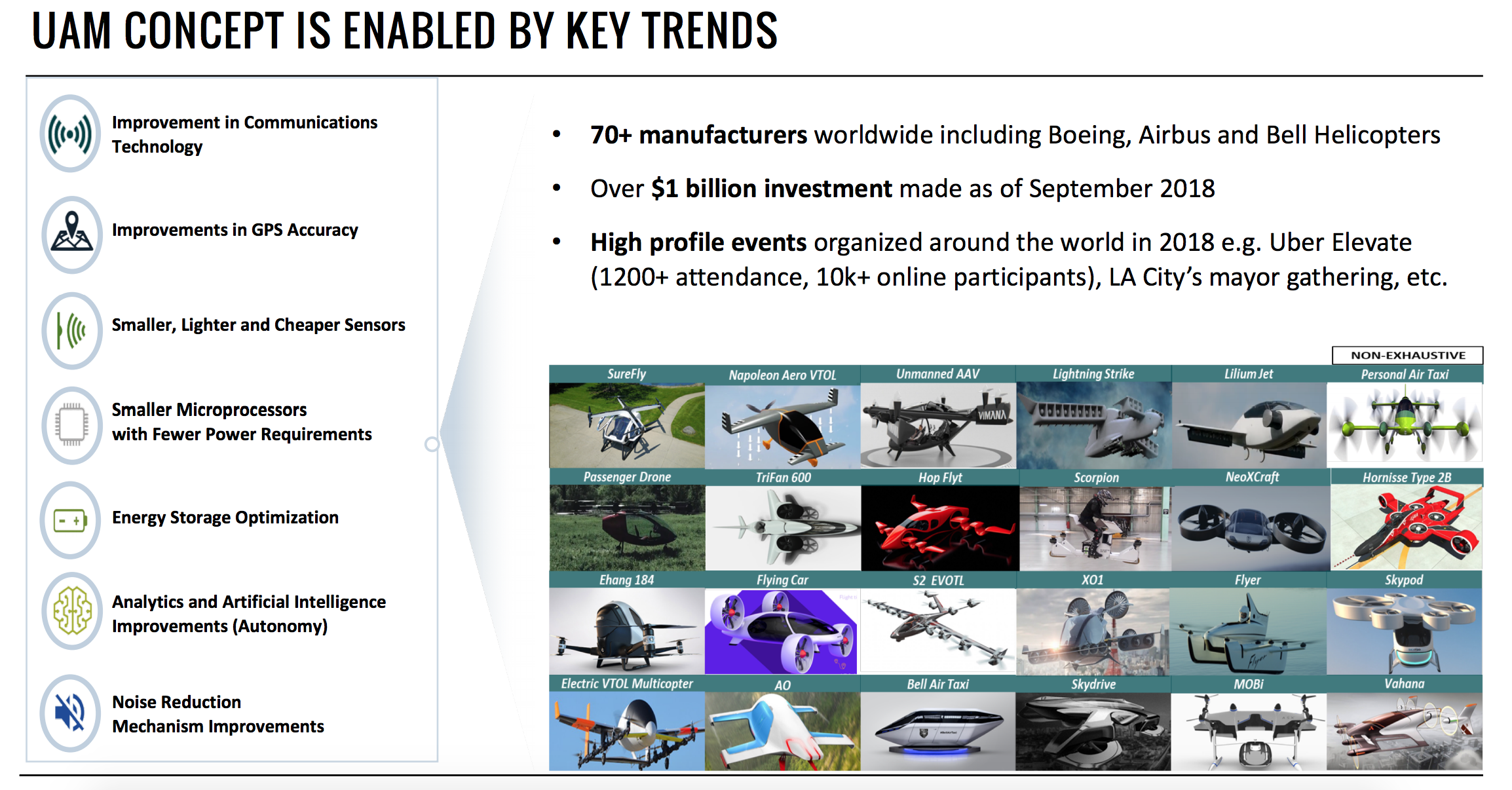 NASA and Booz Cited a few Key Trends for the UAM Industry, Including GPS Accuracy Improvements and AI Autonomy Advances

That’s the Summary. Here are the details.

A Strategic Advisory Group, or SAG, was assembled from prominent figures in the UAM, transportation, government regulations, infrastructures, public policy, and insurance disciplines – the SAG serves as an invaluable resource that enabled the information and advice of experts in their respective disciplines to offer their work and research toward answering some of the most pressing issues in the path towards wide spread UAM application. The study analyzed the following key components, each of which will be detailed below:

The study focused on a consortium of 10 cities across the United States to represent the larger industry. 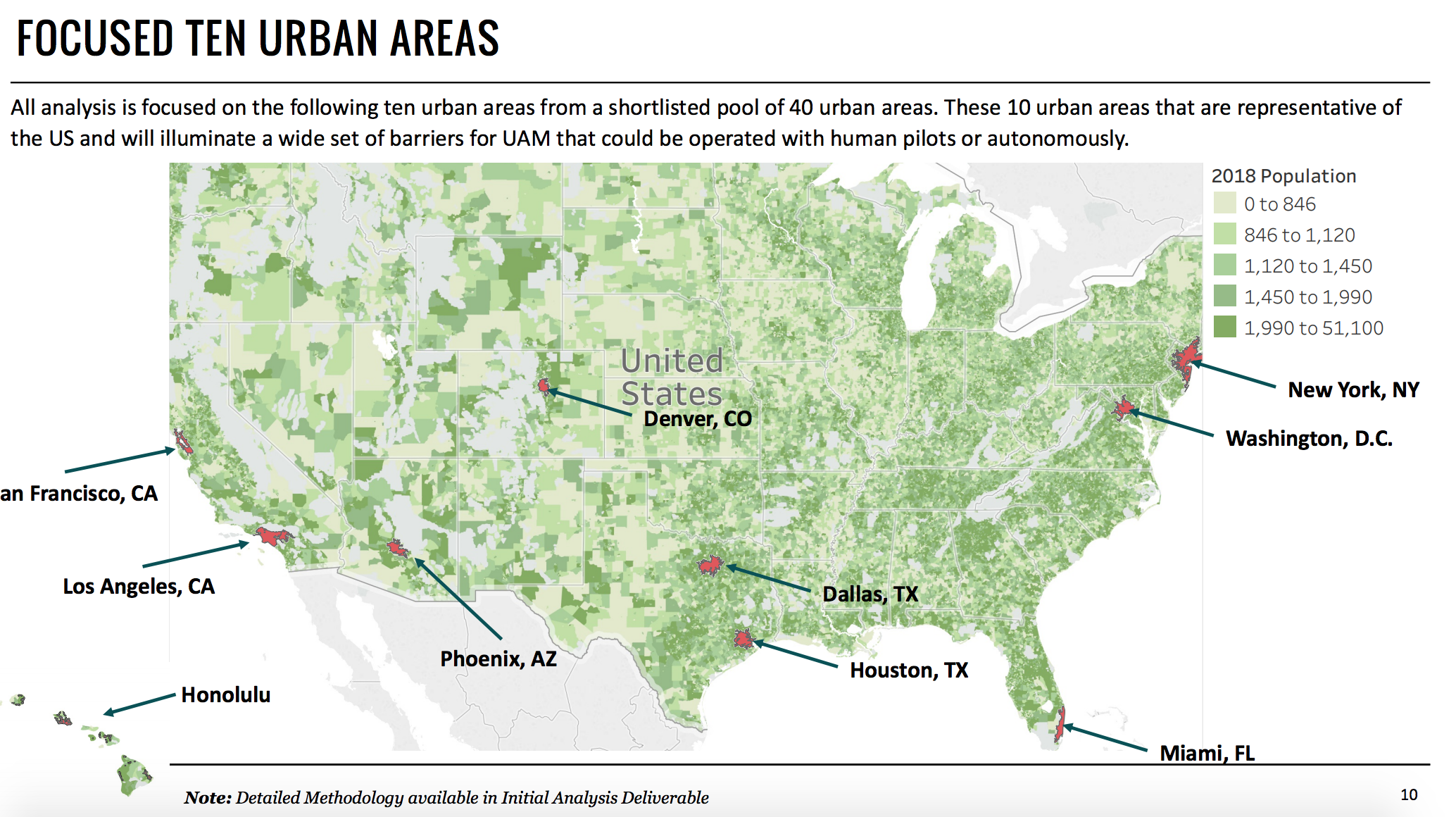 Of potential interest in the selection of these 10 cities (and one city that has not been considered as heavily in the past) was that of Denver. Other cities that were selected, such as Los Angeles and Miami, have already been under consideration by real estate development companies and technology firm UAM development plans. However, the selection of Denver in this study is important – Denver has the potential for the lowest portion of air taxi shuttle trips within the FAA’s National Airspace System (NAS), which balances the perspective of a mostly urban-dominated, completely NAS-immersed UAM operating environment.

The largest legal and regulatory challenges that have the potential to slow urban aviation are regulations that already exist. In general, the framework for certifying aircraft already exists, but there are numerous legal barriers and gaps in the path to certification for some aircraft that may be classified as rotorcraft/mixed propulsion. Similarly, determining which regulations apply to what component(s) of air taxis is another challenge that has not yet been answered. Finally, system redundancy and failure management are critical safety considerations that will not be amended whatsoever for the sake of introducing a new type of aircraft such as an air taxi.

Fortunately, there are answers on the horizon to these challenges; for instance, ballistic parachute recovery systems are being developed for UAM systems. Additionally, the summary also cited that voluntary self-regulation (or even proposal of standards) may help to advance the regulatory process faster than relying solely on federal and state governments.

The largest concerns from the audience surveyed in this study (both younger persons aged 18-29 and older persons aged over 50) focused on credibility of pilots and the manufacturers of the aircraft. In general, those pilots/companies who were older attained a higher level of perceived experience, but gender and racial bias also played a role in affecting a passenger’s comfort with boarding a given flight. Passengers preferred intra-city hops instead of inter-city trips, and surprisingly, accepted a “hybrid flight deck” configuration where one pilot was onboard and the other “pilot” was automated.

Interestingly, the study also analyzed the position of weather in effecting UAM operations, and how in some locales the weather has enough of an adverse effect on air taxi services that their application could be placed in jeopardy. In general, cities in the Western United States had favorably weather, with the exception of impacts due to potential low visibility, high temperatures, and strong surface winds during summer thunderstorms. Cities like San Francisco suffer during the summer mornings when low-lying fog banks generate IFR conditions. 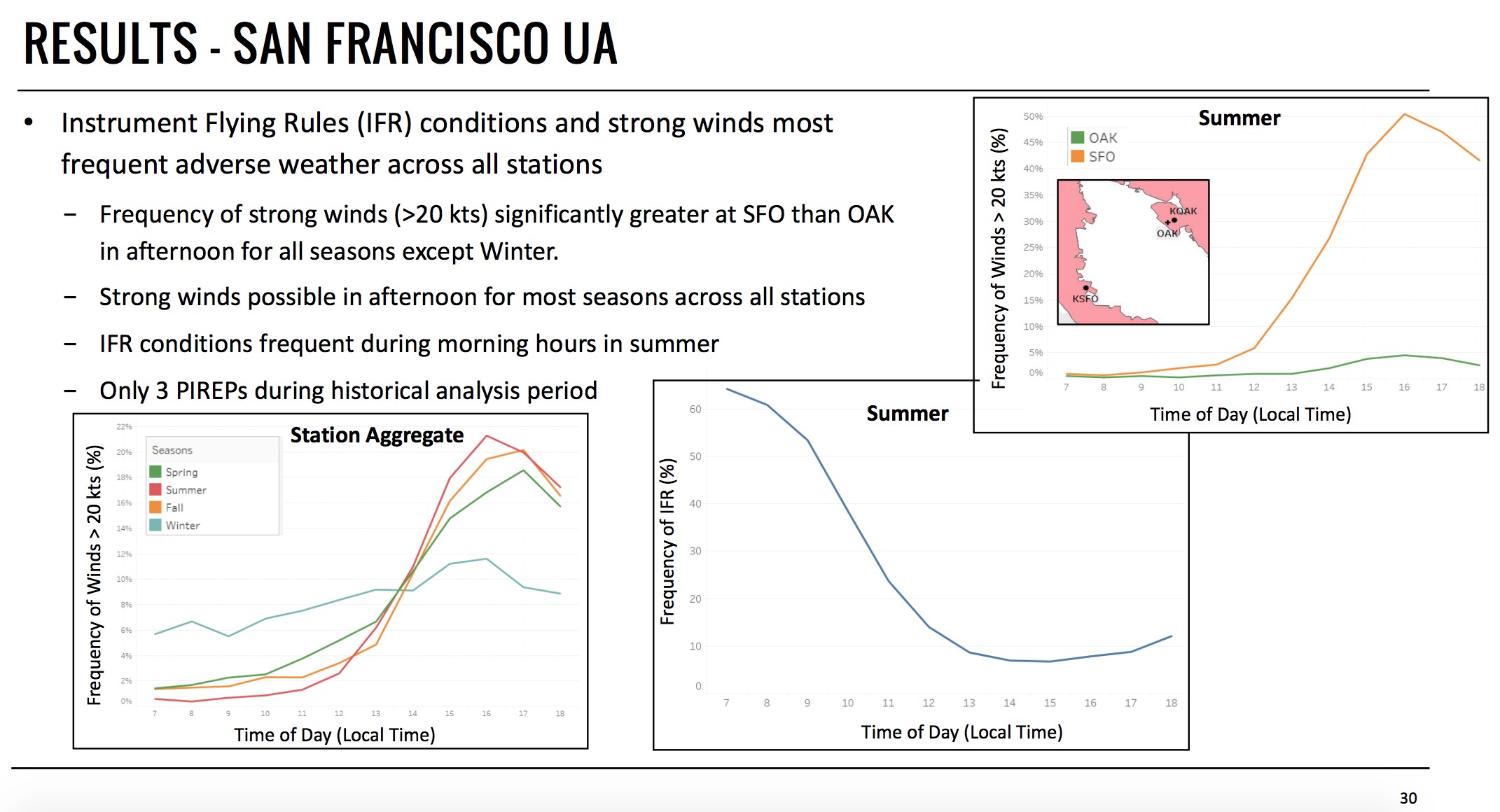 In the Eastern United States, storms and low visibility are the primary limiting factors, especially during summer afternoons. In areas such as Texas, low level wind shear, high temperatures, and storms have large impact potential to UAM operations, storms in the summer, and low visibility in the winter. While the summary did not expound further, expect more details in the full report – and also an overview of just how much the TAM may be reduced by seasonal weather shifts.

A Monte Carlo analysis was performed under a range of constraints to determine max usabilities – constraints involving customer’s willingness to pay, infrastructure limited, time of day limited, weather limited, and unconstrained scenarios. After performing these analyses, it was determined that only ~0.5% of unconstrained trips were captured after all other constraints were applied. This figure translates the $500 Billion as mentioned originally to the $2.5 Billion TAM. While the UAM market itself provides a lucrative magnitude of TAM, it is not without competitors – such as autonomous cars.

Additionally, analyses were conducted to determine the cost of air ambulance transports. After 10,000 iterations of this analysis, the estimated cost for an average trip was $9,000 for an eVTOL, and $9,800 for a hybrid – compared to $10,000 for that of a conventional helicopter transport. While there is a potential cost savings and practical benefit to eVTOLS as air ambulances (potential lives saved) the operational proficiency for eVTOLs will require time to establish – time that helicopters have had to demonstrate their applicability in situations that require extreme consistency. Another important consideration is the return time for an eVTOL, which is much higher than helicopters. While helicopters can be fueled with Jet-A in a matter of minutes, the charging technology for eVTOL’s is still not completely matured.

The best case scenario for air shuttle and air ambulance services includes a TAM of $500 Billion. In the near term, 5-seat eVTOL’s will cost ~$6.25 per passenger mile to operate. The high cost of infrastructure (and the current availability of infrastructure) are both large hurdles to overcome. Legal and regulatory analysis found that the air taxi, air ambulance, and air shuttle markets all face similar barriers. Additionally, psychological analysis and market surveys have proven that the general public is much more likely to board a piloted aircraft than an autonomous one. Finally, weather is a larger influencer in the applicability of air shuttle services than the industry has previously considered.

Why it’s Important: The joint Executive Summary between NASA and Booz Allen Hamilton has underscored many of the points made by numerous other consulting studies – but it also includes new considerations that will be important for the future development of the UAM industry, including the effects of return time for air ambulance operations and the effects of weather on all three markets. Stay tuned for the release of the full study and increased details on each of the topics addressed in the executive summary. The study emphasizes that a market of $2.5 billion may be reached in the short term (even after all the constraints are applied to market modeling) which is a large enough magnitude to continue to sustain the level of interest and dedication toward making this industry commercially operational in about five years.