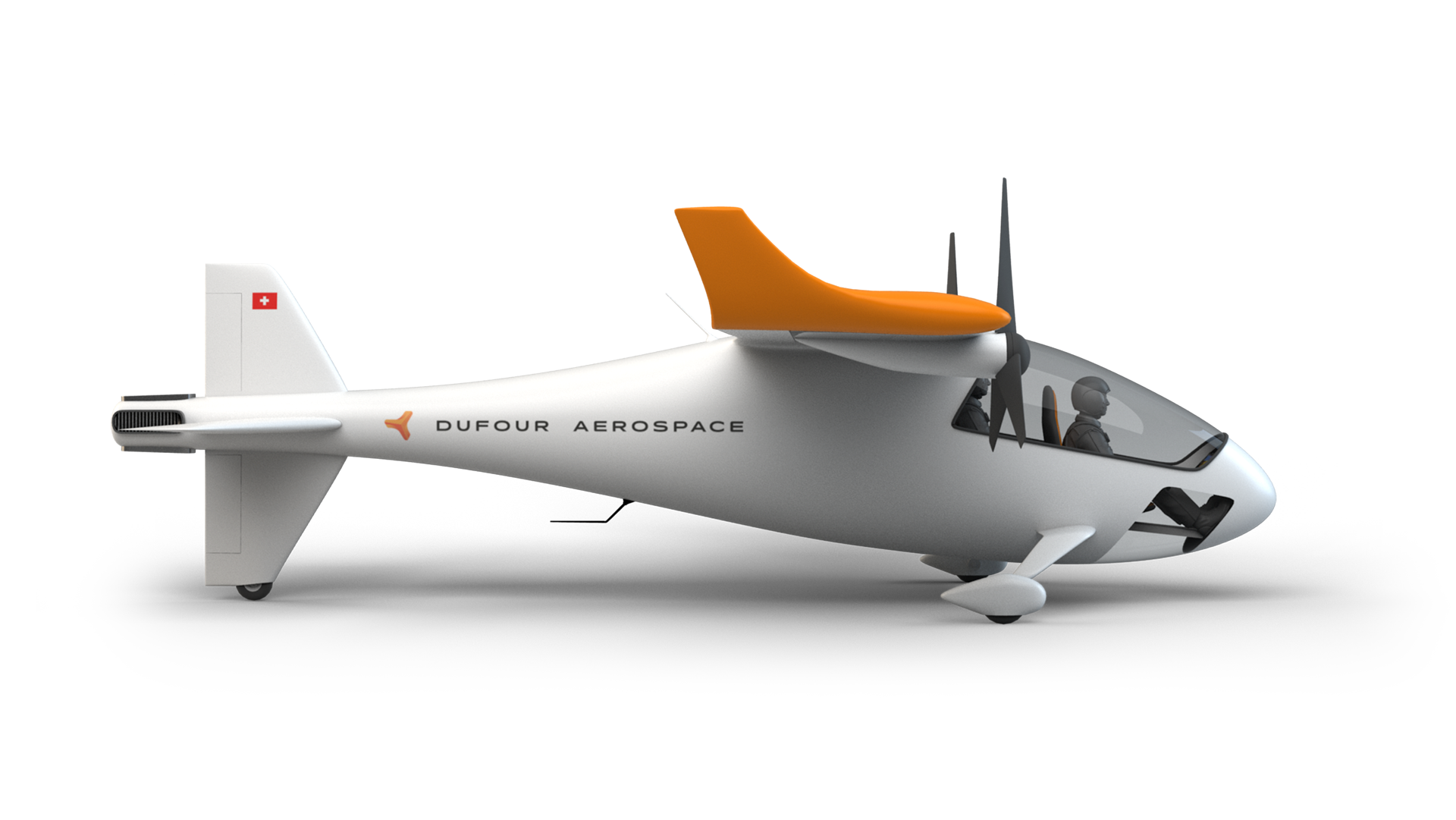 The aEro2 is one of Dufour Aerospace's eVTOL concepts currently under development. It is a winged eVTOL that uses two variable angle propellors mounted on the wing of the aircraft that swivel to provide vertical thrust for takeoff and landing and then transition to a horizontal orientation to facilitate acceleration to forward flight. Dufour is also known for successfully designing and flying other conventionally configured electric aircraft, and looks to build on the success of its aEro 1 electric CTOL aerobatic plane.

Our aircraft uses a proven tilt-wing design concept which keeps the wings constantly under airflow and therefore offers outstanding stability and control even in very slow flight. An efficient tail fan provides pitch control in hover flight and ensures that aEro 2 is robust against changes in center of gravity and gusty conditions.

Four motors (two on each side) provide redundancy, with each motor temporarily able to provide twice the power to keep full hover capacity in case of a failure. The laminar airflow around the wing makes it less vulnerable to vortex ring state, strong wind and gust conditions in hover than any other aircraft.

The unbeatable visibility makes it safe to operate in congested areas and gives the passengers a wonderful view.

Even without electric motors running the aircraft is still under the pilot's control: unlike a multicopter, the conventional plane configuration guarantees flight safety in multiple ways. If 1 or 2 motors fail on one side, or even if 3 motors fail the aircraft is still fully controllable and can make an emergency short landing within a couple of dozens of meters. And even in glide configuration aEro 2 is fully controllable and glides at a 1:12 ratio (like today's single engine light airplanes). Finally, the integrated parachute guarantees the last line of safety.

Operational safety is also paramount: similar to a helicopter, for the safety of passengers and bystanders, the rotors are positioned above head height. The passenger compartment is a strong monocoque construction and the landing gear can absorb impact energy if necessary.

Our Take on the aEro2

Dufour did what many other eVTOL manufacturers did not - they built a full size electric proof of concept conventional aircraft, named the aEro1, prior to moving forward with an eVTOL configuration. The company's iterative approach to testing its electric propulsion technology first on a proven configuration has evidently paid dividends, as shown by the success of its aEro2 eVTOL flight test program. As of July 2020, Dufour has just completed the first phase of flight testing of its VTOL technology demonstrator aircraft. Over the course of 550 test flights, expanding the flight envelope incrementally, the aEro2 demonstrated a high degree of stability and control in all conditions, including transitions from hover to cruise and back again.