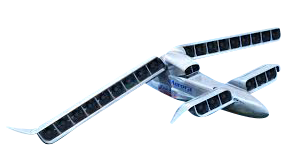 LightningStrike is the first aircraft in history designed to demonstrate the following:

Our Take on the LightningStrike

Aurora Flight Sciences has a large pool of resources at its disposal - even more so following Boeing's purchase of AFS in November of 2017. The LightningStrike concept was a conscientious effort to corner not just the civilian eVTOL/VTOL market, but also the future of military VTOL applications. The LightningStrike completed sub-scale proof of concept test flights before being officially discontinued by AFS.