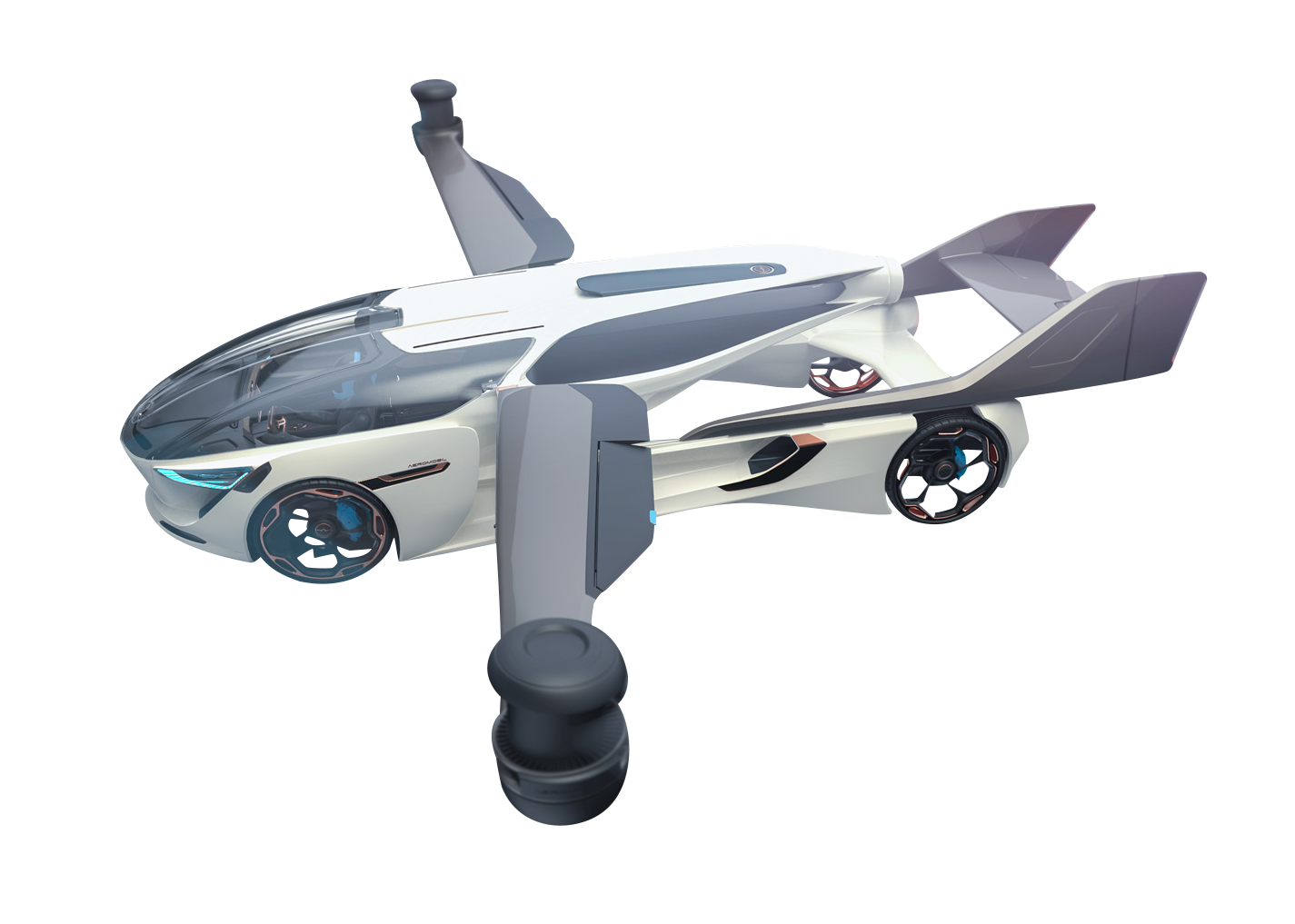 The AeroMobil 5.0 VTOL is being developed in the "Detroit of Slovakia" by Mr. Juraj Vaculík and his AeroMobil team. The 5.0 VTOL advances the company's 4.0 STOL design.

AeroMobil, an advanced engineering company, today announced the extension of its planned product range with the launch of the AeroMobil 5.0 VTOL (vertical take-off and landing) concept for shared mobility. Together with the AeroMobil 4.0 STOL (short take-off and landing capability), the company solves the first-to-last mile of personal air transportation, because users are able to switch smoothly between flight and driving mode.

The AeroMobil 5.0 VTOL concept has two electrically driven rotors to ensure safe vertical take-off with horizontal thrust being provided by an electric powered rear mounted pusher propeller. It will seat four passengers providing similar comfort and user experience as next generation electric vehicles. Each occupant will have access to a personalised inflight experience, with flight or drive data and advanced communications and media to ensure occupants stay connected while in the air or on the road.

AeroMobil’s international engineering team has more than 400 years of cumulative experience in the automotive and aerospace industries. The team has been able to develop the AeroMobil 5.0 VTOL concept and AeroMobil 4.0 STOL to meet the varied needs of private usage and future flying taxi operators.  The AeroMobil 4.0 STOL is currently in the testing phase of the development and delivers efficient intra-city travel up to 700 km range, which is more than double that of most of electric VTOL passenger drone concepts due to much higher energy efficiency.

“We see flying cars as versatile vehicles that both fly and drive, which is what we will be able to offer with the AeroMobil 4.0 STOL and AeroMobil 5.0 VTOL concept.  We plan to deliver the vehicles with the range needed for urban and intra-urban journeys, allowing customers to travel in any weather conditions while maximising the efficiency for flying taxi operators.” - said Douglas MacAndrew, CTO of AeroMobil.

“AeroMobil 4.0 STOL uses several patented technologies, a highly innovative combustion engine and has the benefit of using existing aerospace and automotive technology, combined in a unique way, thus achieving far greater energy efficiency, speed and range than any electric VTOL. It is also designed within existing regulation, hence enabling much sooner go-to-market in 2020 than the electric VTOL category, which in general is being mooted as ready for shipment in 2025”. – said Patrick Hessel, Chairman, AeroMobil.

The AeroMobil 5.0 VTOL conceptual design will maintain AeroMobil’s high standards for comfort and safety from the AeroMobil 4.0 STOL, which in flight mode, will be among the first flying vehicles with airbags, a frontal automotive vehicle crash structure and a parachute. Based on similar design language, it will have an instantly recognisable silhouette, with a modern and desirable exterior with a comparable footprint to a regular car.

Our Take on the AeroMobil 5.0

AeroMobil is currently a very busy company - they're concurrently completing testing on their 3.0 STOL, working on designing and building their 4.0 STOL, and planning for ultimate implementation of the 5.0 VTOL. Although the company has a decent pool of resources, the 5.0 VTOL is still quite far down the design pipeline as the 4.0 STOL will most likely require almost all of AeroMobil's current resources. Monitor the 4.0 STOL's progress as a good barometer for the 5.0 VTOL's future success.